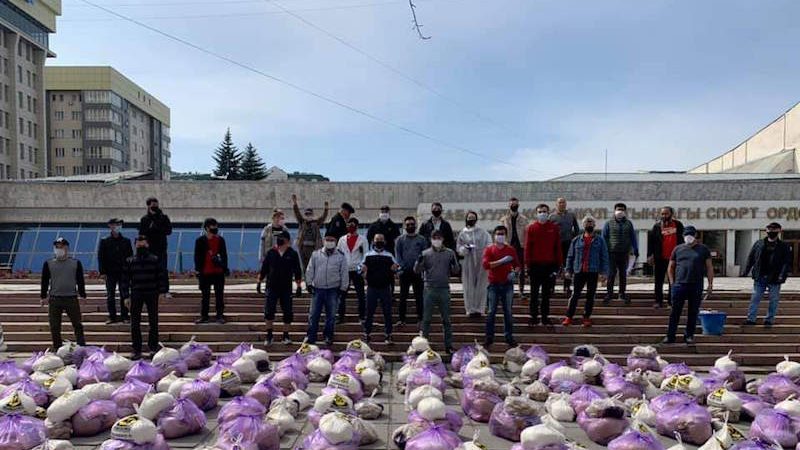 Even before the first patient with a positive result appeared, people in Kyrgyzstan have been watching closely as the coronavirus pandemic has engulfed the world. They had good reason: their small mountainous country in Central Asia borders China, where the outbreak began.

Kyrgyzstanis on social media networks expressed concern about how the virus would hit the country's weak economy. People in the service sector worried whether it would affect the 2020 tourist season; shopkeepers and farmers wondered whether it would interfere with spring planting, and therefore the harvest.

However, most people in Kyrgyzstan simply cannot afford to lock themselves away and wait until the crisis is over. The country now searches for a middle ground between a strict quarantine and a functioning economy, fearing that otherwise more people may die from hunger than from the coronavirus.

That recognition has led Kyrgyzstanis across the country to take matters into their own hands, volunteering to help their neighbours and fellow citizens however they can.

Some cynics might say that's because they never had much faith in the government's response. So just how prepared were the authorities in Bishkek when the coronavirus came to Kyrgyzstan?

Timeline of a lockdown

At the time of writing there are 270 confirmed coronavirus cases in Kyrgyzstan, according to the Johns Hopkins University coronavirus map.

As the coronavirus has spread, many countries have imposed restrictions on public life. They have closed borders and schools, and introduced quarantines. Kyrgyzstan was no exception, although the government's response was a little delayed. Until early last month, the authorities only recommended the cancellation of public events, and rejected proposals to close schools and universities.

That all changed on March 12, when the government officially restricted all mass events. Two days later, an entry ban on citizens from seven countries came into force, applying to China, Italy, Iran, Korea, France, Germany, and Spain. Foreign citizens who have visited these countries or passed through them in the past 30 days are prohibited from entering Kyrgyzstan

On March 16, Kyrgyzstan fully closed schools and universities and restricted large family events and funerals. On March 18, the country reported its first positive case of coronavirus. Or rather, cases. The virus was detected on three people who had arrived in the country on March 12 after performing the small Hajj, or Umrah, pilgrimage to Saudi Arabia. Furthermore, 135 Kyrgyz citizens arrived on the same flight, 90 of whom were placed in isolation.

These first cases were identified in the Jalal-Abad Region of southern Kyrgyzstan. This was where Kyrgyzstan declared its first state of emergency. Restrictions were placed on entering and leaving the region, with exceptions made for state officials.

Within a week, there were 44 confirmed coronavirus cases in Kyrgyzstan. The youngest infected person was not even a year old, and the oldest 86. This figure has increased every day as the pandemic spreads to more regions of Kyrgyzstan. On March 25, the authorities declared a state of emergency in Bishkek, Osh, and Jalal-Abad, the country's three largest cities, as well as many districts.

A curfew is now in force in Bishkek. As of today, Kyrgyz citizens may not leave their homes without good reason, such as going to the doctor or going shopping for food or medicine.

With a nation in lockdown, Kyrgyzstan's government has had to consider how to make life easier for struggling citizens.

Deputy Prime Minister Erkin Asrandiyev estimated in a press briefing on March 26 that Kyrgyzstan has already lost between 27 and 28 billion Som ($347-360 million) due to the closure of borders and economic downturn in recent months. The same day, the IMF's board of governors approved a US$120.9 million loan requested by Kyrgyzstan's President Sooronbai Jeenbekov. This was the first such request for urgent financial assistance made by an IMF member state since the pandemic began.

Furthermore, on April 3 the president ratified a law aimed at stabilising the economic situation during the pandemic. These temporary measures, which last until October, include an allowance for businesses to defer their tax returns and payment of taxes until 2021.

But many Kyrgyzstanis remain sceptical – social networks are full of accusations that the government was poorly prepared for the pandemic. Ordinary people are trying their best to survive and help each other, they say, while the country's leadership lives in a parallel reality. How else can they explain the authorities’ decision on April 1 to announce a referendum on the country's system of governance? The referendum, proposed by deputy Kurmankul Zulushev to be held in October, would further empower the presidency.

President Jeenbekov's decision to fire Deputy Prime Minister Altynay Omurbekova and Minister of Healthcare Kosmosbek Cholponbayev on April 1 has also been the cause of much speculation. The previous day, Jeenbekov had criticised members of the government for what he called insufficient efforts to combat the coronavirus. The blogger and media manager Gulnura Toralieva criticised the move on Facebook:

Everything depended on (former deputy prime minister) Altynai Omurbekova in this moment of crisis; it's a dangerous decision to remove her from office. So, yeah, never praise an official who works hard — they'll be fired.

The situation in Kyrgyzstan would likely be much worse without citizens’ self-organisation. One example is the People's Headquarters in Bishkek, in for which I also volunteer. It's easy to do so; potential volunteers must simply join the movement's Telegram channel.

More than 2,000 volunteers work at its headquarters in Bishkek. The movement has more than 500 volunteers in the field, helping poor families, people with disabilities, the socially vulnerable, and single mothers at this difficult time. The organisers say that they receive hundreds of requests for assistance every day; the People's Headquarters also offers help spontaneously. Eldar Shabanov, one of the group's coordinators, said the following to GlobalVoices:

The idea of the people`s headquarters appeared because of the fear that it would be very difficult for our citizens if they were quarantined. On March 10, I wrote a post where I already expressed concern. We didn't have the virus and quarantine back then. I was afraid for the people who only just get by – taxi drivers, minibus drivers, low-skilled staff who receive payment every day. In the case of quarantine, they will last a maximum of three to four days. I couldn't shake off that thought, so decided that if a quarantine was announced, we would have to help people in need. I called a friend and shared the idea, and he immediately supported me.

The volunteers are also helping medical staff, providing them with protective suits and masks and delivering hot meals to staff working at quarantine centres. The suits, purchased by donations, are made by a local company in Bishkek and reportedly cost 240 Som ($3).

We have sewn more than 300 protective suits for medics and continue to do so, we have distributed more than 5,000 portions of hot food, provided more than 200 families with food in Bishkek and its suburbs alone. The basket of provisions we offer is calculated to last one and a half to two weeks for a family of five people. There is enough money in the till to provide for another 1,000 families. Every day, more and more people want to help. Like minded people across almost the entirety of the country are actively doing the same. There are headquarters in Karakol, Tokmak, Kant, Kara-Balta, Osh, and Jalal-Abad. Unfortunately, we don't have time to collect statistics for other cities at the moment.

We are the #ЭлдикШтаб, the national headquarters for combating the coronavirus. We believe that our society should support the state in this difficult period. Come and join us!

Kyrgyz migrants abroad have also started to raise funds for medical workers. On March 25, an advertisement appeared on the online fundraising platform GoFundMe. Its founder has since received $23,000. It pointed out that Kyrgyzstan's doctors are in desperate need of personal protective equipment (PPE):

Dear Kyrgyz people! During COVID-19, the situation of our doctors in Kyrgyzstan is dire. They have to come to work by taxi and buy masks with their own money. Their salaries have been reduced. This is a grim tale about how hard work can be. If they slip up and get infected, it's the end for them. So let's come together and support our doctors at this time. Let's unite!!!

This Twitter user praised the initiative, pointing out that the large number of Kyrgyz citizens who have emigrated are still dedicated to their homeland:

All these donations and all this organisation has convinced me of just how much Kyrgyz people cherish and care for their country. People can criticise those who have left as much as they want, but I see so many people [overseas] who have lost their jobs and are barely holding on but still try to help our people over there [in Kyrgyzstan].

To be fair, businessmen, politicians, and larger companies have not remained on the sidelines and are playing their part. Despite its loan from the IMF, Kyrgyzstan's Ministry of Finance also opened an account on March 12 to collect donations to support the state's fight against the coronavirus. As of April 9, the account has received over 121 million Som ($1,556,000).

Despite all this assistance, the National Headquarters is receiving more and more calls for help from single mothers, disabled people, and those without any means of support. Many of these people previously made their living at the markets, which are now closed down.

According to Eldar Shabdanov and two other coordinators of the movement Urmat Nasykulov and Tilek Toktogaziyev, some doctors have even been calling the helpline to request help:

We opened a phone line to communicate with doctors anonymously, and in one day we'd received over 300 appeals. They ask for protective suits, hot food, and transport to move around the city. We try to help them anonymously, because at the very beginning of our campaign, doctors who thanked us publicly were reprimanded. Volunteers who deliver them hot food say that the doctors almost have tears in their eyes. We heard one report of a doctor who leaves their house at four AM and walks about four kilometres to work, and returns home hungry.

This suggests that in Kyrgyzstan, as in many other countries, volunteers are now having to stand in for the state. The same coordinator stressed that the country's poor may struggle even more than in the pre-pandemic era:

The picture of the poor is more tragic. They send a lot of photos with half a piece of bread, an empty refrigerator, and the last 20 Som in their wallet. Despite the fact that a single number is allocated for these appeals, many citizens call the personal numbers of coordinators day and night. Recently, a woman called me three days in a row, day and night. She has nine children and a disabled mother-in-law, they have nothing to eat. Friends were told the story of one woman with many children; one child no longer gets out of bed and suffers from abdominal pain due to lack of food. It's all very emotionally difficult. We need help right now and we need a lot of it.

The movement and its volunteers now receive thousands of these messages every day. For a small mountain country with a population of six million, one wonders whether that is a little or a lot.

In any case, this solidarity is showing a brighter side of Kyrgyz society. When Kyrgyzstan gets through this, we will have plenty of reasons to hug each other again. Though perhaps still at a two metre distance, as the WHO recommends.