"I think a ceasefire is the best thing now." 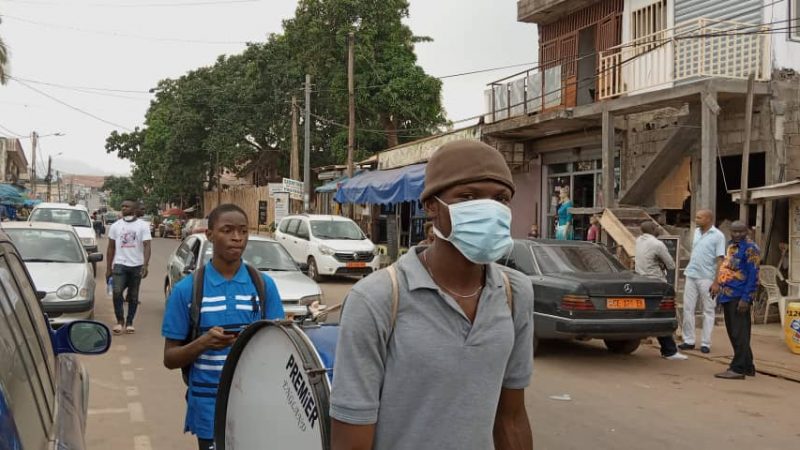 A young drummer walks through the streets of Yaoundé, Cameroon, wearing a face mask during the COVID-19 outbreak, March 14, 2020. Photo by Ekonde Daniel, used with permission.

On March 6, Cameroon recorded its first case of the highly contagious novel coronavirus known as COVID-19: a French national who arrived in the country from France.

A month later, the number has jumped to 730 people with 60 who have recovered and 10 deaths, as of April 9, 2020. Cameroon has the highest number of COVID-19 cases in West Africa.

Cameroon shut down its frontiers and banned gatherings of more than 50 people on March 17 for 15 days and extended the exercise a few days ago, yet there are concerns about how the virus is being tackled with relative nonchalance, with a threadbare healthcare system and a separatist war along its western border.

‘Coronavirus is for white people’

In the central business district Yaoundé, the capital, a giant LED board appears with the words: “If you are sick, stay at home and use a surgical mask in the presence of other people.” That message has not seemed to go down well with Yaoundé residents. 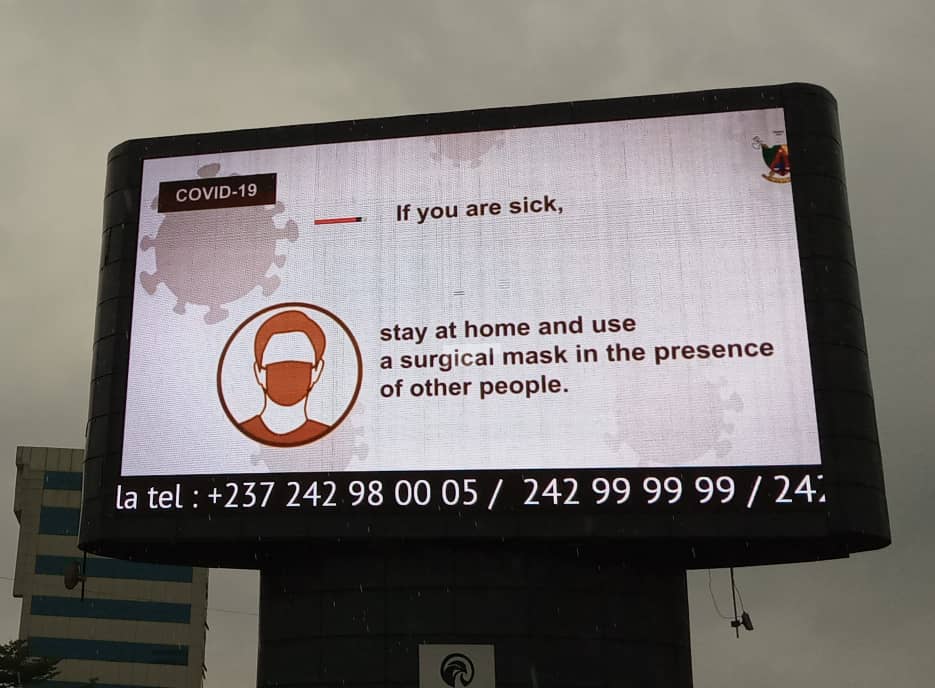 A large LED sign encourages Yaoundé, Cameroon residents to stay at home during the COVID-19 outbreak. Photo by Ekonde Daniel, used with permission.

“We hear of many deaths in Italy and Spain,” Abel Mbock, a street seller in Yaoundé told Global Voices on March 29. “But it is not serious here because people walk freely on the streets and do whatever thing they want to do. I think our hospitals are stronger,” he said.

Meanwhile, Marou Souaibou, who sat in a local café, was still completely in the dark about the seriousness of COVID-19. “Coronavirus is for white people. It doesn’t interest me in any way because here, in Africa, our immune system is stronger than that,” he told Global Voices on March 29.

Conversely, those who arrived in the country from highly infected nations are reported to have slept with sex workers in their quarantine center, while others have evaded the isolation process – acts government has blamed for the increased number of cases.

However, most people have started adjusting to the reality of the virus as the number of  cases and deaths climb in Cameroon:

CAMEROON has the highest number of COVID-19 cases in West and Central Africa. What really happened? Is it due to Administrative recklessness? Failure to close the borders on time? Refusal to Lockdown? Failure to test the high and mighty who came from abroad? We shall conquer! pic.twitter.com/o5vP2x3K07

Southern Cameroon Defense Force (SOCADEF), one of the groups fighting for independence in Cameroon’s English-speaking regions, accepted a call for a ceasefire from the United Nations so that people can be tested for the coronavirus. 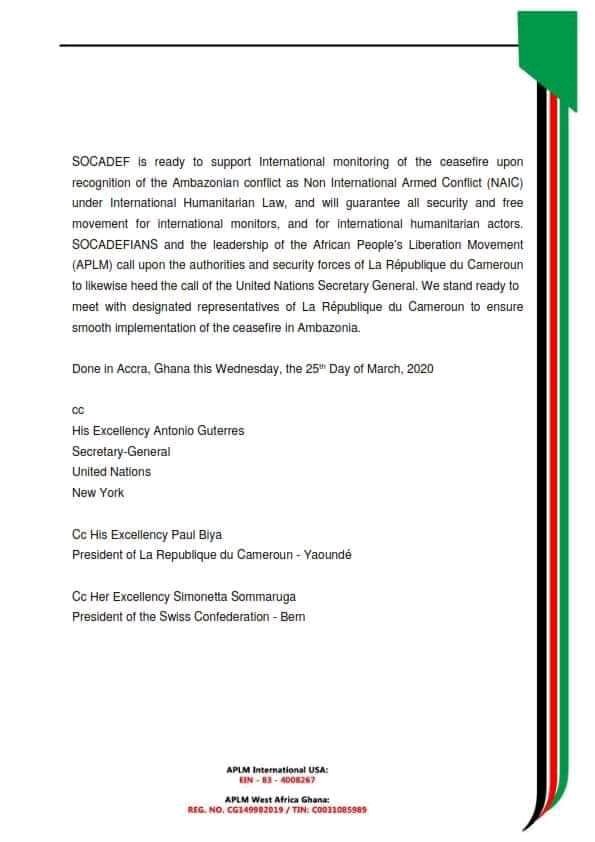 In a March 25 statement, SOCADEF, headed by Dr. Ebenezer Akwanga, said it acknowledged the UN’s “urgent appeal to allow for concerted worldwide action against the coming Coronavirus pandemic.”

The suspension of hostilities — to last for 14 days — started on Sunday, March 29.

Though other rebel groups have not regarded Antonio Guterres’ call, human rights lawyer Agbor Felix Nkongho told Global Voices on March 26, it was a positive gesture from SOCADEF.

“I think that if you are really fighting for the interest of a people — now that we have a pandemic, you will need to find a way for the people to be tested or for them to avoid spreading [the virus],” Barrister Nkongho said by phone.

“People cannot be without having hand sanitizers, soap and water. I think a ceasefire is the best thing now.”

On January 21, 2020, the United Nations reported 679,000 people have fled from their villages and are dire need of healthcare as over 40 percent of health centers have folded due to violence in the troubled regions.

On March 24, Global Voices spoke with Dr. Ebongo Zacchaeus, head of health in the region, who confirmed that three people had already tested positive in the southwest region, one of the embattled regions. The number is now four in that region alone.

Dr. Ebongo also said that samples from the coronavirus tests can only be confirmed in Yaoundé, where there is a proper testing center.

The government said it will create other testing centers in Douala and Bafoussam, towns that have COVID-19 patients, but fears remain that the spread may not give them the window to do so.

Authorities in the southwest region have banned people from sitting in restaurants and drinking spots in a bid to curb the spread of the coronavirus. This coupled with the government’s nationwide 6 p.m. curfew, has laid off many people in the informal sector.

A business center closed around 5 p.m. near the French Embassy in Yaoundé, Cameroon, under COVID-19 measures to close down by 6 p.m. at the latest. Photo by Ekonde Daniel, used with permission.

Ngando Boris is a bartender in Buea, the regional headquarters of the southwest region.

“I have not received salary for a month now since the government banned the opening of public places from 6 p.m. Our employer sent us home because we can’t work in the evening. I am just managing from what I saved,” he told Global Voices by phone on April 4.

“After the [separatist] crisis, now is the coronavirus. It is worse!”