#NiñasNoMadres: Argentines protest against the forced pregnancy of young girls

'A pregnant girl is a raped girl'

Photo credit: Emergentes/Flickr, taken during the demonstration of May 11, 2018. Under CC license.

On February 19, pro-choice activists demonstrated in front of the Argentine National Congress, in the capital Buenos Aires, calling for the approval of a bill that would make abortion fully legal. Protestors also demanded that the right to abortion in circumstances that are already allowed by Argentine law is also fulfilled.

Demonstrators remembered the story of Lucía, an 11-year-old girl forced by doctors, religious leaders, and legal authorities to carry a pregnancy to term after she was raped by her grandmother's partner. The case shocked Argentina and became a symbol in the struggle for the right to safe abortion in the country.

As the age of consent in Argentina is 13 years old, the penal law considers that any sexual relation with minors below that age to be rape. Activists highlighted that point in the protest: “A pregnant girl is a raped girl,” as the motto of a pro-choice campaign says.

Lucía, a pseudonym created to protect the victim's safety, had been suffering from stomachaches when her mother took her to a clinic in a rural area of the northern Argentine province of Tucumán. Doctors found out she was 19 weeks pregnant.

Lucía's mother then took her to a provincial hospital and requested doctors performed an abortion, the mother told the Argentine press. But medical staff refused to terminate Lucía's pregnancy, alleging conscientious objection, which means the procedure offended their personal values and beliefs.

The mother said that doctors argued an abortion would put Lucía's life in danger and that the child was pressured to carry the pregnancy to term. She added that a group of people gathered around the hospital shouted “killer” at them as they left.

Lucía's story quickly spread around the province. Religious vigils were organized in the child's hometown to “impede the abortion.” The province's archbishop summoned his congregants to “protect all human life” in an audio message that went viral on social media — he went so far as to reveal Lucía's real name in the recording. Meanwhile, pro-life groups marched in the provincial capital San Miguél de Tucumán, insisting that the child survivor of rape bring the pregnancy to term “for the good of the [unborn] child.”

By the time a regional court ordered the hospital to perform the abortion, Lucía was six months pregnant. A c-section was performed on February 26, 2019. The fetus died ten days later from respiratory complications. The death coincided with International Women's Day, March 8.

Argentina's Christian Democratic Party, which is backed by religious and fundamentalist groups, filed a police report against the doctors who performed the procedure, seeking a manslaughter charge.

Two weeks later, a Tucumán family judge ruled that the deceased fetus would not be registered as Lucía's daughter since the child “had no procreational will or vocation to maternity.” 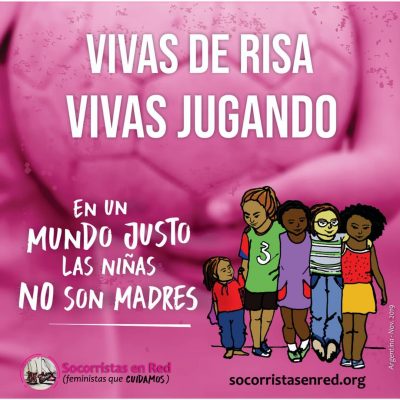 “Alive with laughter, alive playing: In a just world, girls are not mothers.” Image from Distribution Network, used with permission.

Pregnant girls from Argentina and around the world

According to Gabriel Castelli, the National Secretary of Children, Adolescents, and Family, the pregnancy rate of young girls in Argentina decreased by 20 percent between 2015 and 2018. Even so, 87,188 teenage girls became pregnant in the country in 2018. The majority of pregnancies of girls under 15 years of age resulted from intrafamily sexual abuse, according to sociologist Silvina Ramos.

Complications during pregnancy or following unsafe abortion attempts, as well as obstruction during labor, are the leading cause of death among girls aged 15 to 19 worldwide, according to the World Health Organization (WHO).

In Latin America and the Caribbean, 30 percent of pregnant women are under 18 years old. Latin America is the only region in the world where pregnancy of young girls is on the rise, according to the campaign Niñas, no madres (“Girls, Not Mothers” in English).

The same campaign denounced several Latin American nations before the UN Human Rights Commission by sharing specific accounts of girls who were barred from accessing legal abortions and the necessary means for preventing unwanted pregnancy.

Protocols to help the other Lucías?

In March 2019, the Office of the United Nations High Commissioner for Human Rights (OHCHR) urged Argentina to guarantee that rape victims have access to safe abortions. 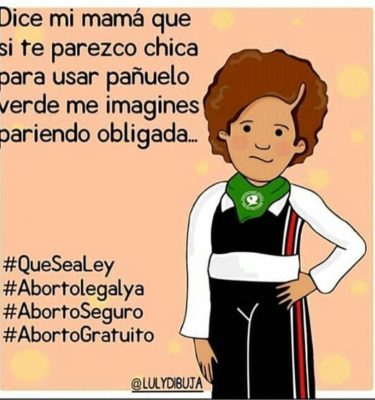 “My mom says that you think I look too young to wear a green handkerchief [symbolizing pro-abortion], you can imagine me being forced to give birth. #MakeItLaw #LegalAbortionNow #SafeAbortions #FreeAbortions.” Image from @lulidibuja, used with permission.

A few months later, six human rights organizations testified against Argentina at the Inter-American Commission on Human Rights (IACHR), for “failing to live up to its obligations under international and regional human rights law when it comes to accessing legal abortion for victims of sexual violence, particularly young girls.”

In 2012, the Argentine Supreme Court ratified the right to abortion in cases of rape. And in December 2019, the Ministry of Health of the recently-elected Alberto Fernández administration enacted a protocol for hospitals to ensure patients have access to abortion in legal circumstances.

However, only 10 out of 23 Argentine provinces currently have adequate protocols or adhere to the national one.

According to Chequeado, an Argentine fact-checking agency, “the lack of protocol does not mean that legal abortions cannot be carried out in these provinces, since it is a right upheld by Argentine law. However, the lack of sufficient protocols that comply with the court’s ruling impedes women’s real access to this right.”

Lucía's case is the living proof that the law alone isn't enough to protect children like her.

Almost a year later, on February 14, 2020, Lucía's rapist was sentenced to 18 years in prison. In a heartfelt letter, the mother expressed gratitude for the support the family has received and her wish that other girls would not undergo the same obstacles as they did.

During the rally on February 19, the Chilean collective Las Tesis adapted the lyrics of their well-known anthem “A rapist in your path”:

Sleep peacefully my little girl mother,
No matter who raped you,
Your child, innocent baby,
Will be protected by the Holy Inquisition. 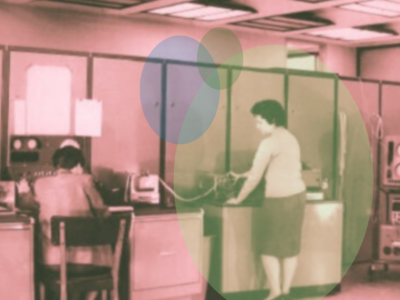