As Russia goes into lockdown, feminists fear an epidemic of domestic violence

Home can be the most dangerous place for Russian women 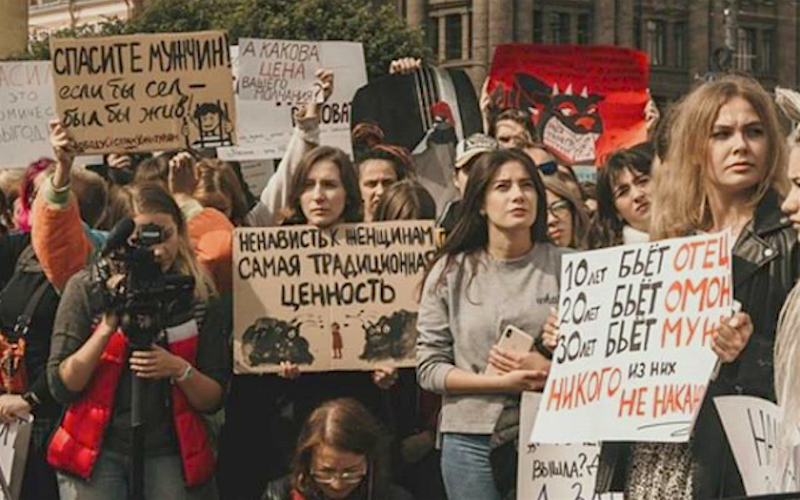 As coronavirus cases in Russia rise rapidly, many cities across the country have gone into lockdown. At the time of writing, all of Russia's large cities scored four to five points on Yandex's “self-isolation map“: meaning that there is “nearly nobody on the streets.”

Home should be a refuge from the pandemic — but for many women and girls, it means being locked up with a serial abuser.

“For a large number of women and children, home can be a place of fear and abuse,” said Dubravka Šimonović, the UN's Special Rapporteur on violence against women, in her recent believes that the coronavirus will lead to a surge in violence against women. Across the world, that already appears to be happening. In Brazil, China, Cyprus, Italy, and Spain, activists and local authorities have recently reported an “explosive increase” in desperate pleas for help from terrified women, following the tightening of restrictions on public movement.

The outlook in Russia is grim; for several years, human rights defenders and feminist activists have tried and failed to secure official recognition of and protection for victims of domestic violence. Since the 1990s, about 40 drafts have been proposed. A bill in 2016 was rejected. The following year, the State Duma relaxed punishments for some forms of domestic violence, amid a conservative campaign for “family values.” Last December, Pushkina and several activists submitted a draft law against domestic violence. It has not yet been adopted, and faces strong resistance.

The tip of the iceberg

Gruesome cases of domestic violence regularly make the headlines in Russia. We could, and should, remember the case of the Khachaturyan sisters, who stabbed their father after suffering years of sexual and physical abuse at his hands. In December 2017, Margarita Gracheva‘s husband chopped off her hands. Last November, the 24-year-old student Anastasia Yeshchenko was decapitated by her professor and partner, 63-year-old Oleg Sokolov.

These cases have rightly captivated public attention. But alongside them, there are no less horrible crimes which take place every day. They are less widely discussed, as the exact number of domestic violence cases in Russia is unknown.

Some cases can be, and are, fatal. By using data cited in news reports, the independent project femicid.net has tried to make its own calculations. According to its 2019 report on femicide (or the murder of women) in Russia, which was also shared by Radio Liberty. The report counts 1,461 cases of domestic violence ending in murder referenced in public sources between January 2019 and January 25. Of these, 593 were committed by intimate partners, 73 by former intimate partners, 266 by family members, and 332 by acquaintances. These numbers are much higher than officials suggest.

These data can't simply be requested from the Ministry of Internal Affairs. Russian criminal law does not include any specific definition of “gender-based violence” or “femicide,” making it hard to measure the full scale of the problem. Therefore, these crimes dissolve into other categories. For example, a woman who dies in hospital after being beaten up by her husband would not be considered a victim of murder in the course of domestic violence.

Femicid's 2019 report cites “Men and Women of Russia-2018″, the digest of the Federal State Statistical Service. It states that 36,200 women died that year from “external causes of death,” which include poisoning, accidental falls, strangulation, drowning, injuries, electrical shocks, burns, firearms and so on. The project's authors suggest that behind each of these terms could be several hidden acts of femicide.

And while a common retort in Russia is that “women can also kill, and do so brutally,” the statistics say otherwise. Official data from the Ministry of Internal Affairs cited by the report show that women are responsible for much less crime than men (16% of the total), and that 79% of extremely serious crimes committed by women were committed in self-defence (though that rarely counts for anything in court). Women form the absolute majority of victims of sexual violence.

The most relevant statistic here is that when it comes to murder, the most dangerous place for a Russian woman is her own home. Of the 1,461 cases in 2019, 446 took place in a home the victim shared with her partner, and in 302 places in her own home.

Today, many women's rights activists say that for all the state's other provisions (such as programmes against gender-based violence, shelters for victims, and restraining orders against perpetrators), Russia's dismal record on femicide and domestic violence will either remain unchanged or get worse unless the government passes a law explicitly forbidding domestic violence.

That struggle is as much about societal norms in Russia as it is about high level politics. As Lubava Malysheva from Moscow Women's Museum put it in a February 8 article for Radio Liberty:

A set of beliefs are being cultivated in society according to which men’s excessive aggression and lack of responsibility is a consequence of their nature; an inevitability which nothing can be done about. But these ideas are contradicted by the reality of more developed countries.

“If he beats you, it means he loves you”

To get a sense of the widespread normalisation of domestic violence in Russian society, just take a look at its portrayal in mass media. Just a few days before International Women's Day this year, a sketch was performed on Comedy Club, a famous Russian TV show. The skit was about a couple discussing how to spend the coming weekend. While the wife was proposing various activities such as shopping, the husband addressed the audience with suggestions of another kind: how to beat his wife up or kill her:

─ Maybe we’ll go to a fashion place?
─ Maybe I’ll punch you in the face?
─ Or better yet we'll go to IKEA
─ Breaking your neck is a better idea
─ Let’s drop by the market
─ Let me get you stabbed
─ First let's find an ATM
─ Maybe first I'll shoot you dead
─ Can we go and buy some food?
─ Better kick you in the face with my foot
─ Maybe we'll just go and do some shopping?
─ Maybe I’ll just douse you with gas and do some burning?

In light of the statistics cited above, this “joke” becomes less hilarious. The online feminist journal 9oemarta.ru drew attention of the Facebook feminist community to the outrageous video. The sketch received sarcastic, but not surprised comments; this kind of misogynistic rhetoric is not uncommon on Russian television as well as media as a whole.

The most common response from feminists was that the video was just too repulsive to watch. And that's understandable. In the country where there's still no law protecting women against domestic violence, jokes about domestic violence on TV are not just bad taste, but also a sad reminder of how little is being done. While women are murdered, jokes about their murder will be laughed at as if in another reality – as feminists know all too well.

Reports of the first cases from a country under quarantine are beginning to emerge. According to nasiliu.net, one of Russia's leading online resources about domestic violence, a man was detained by national guardsmen on April 3. He had murdered his ex-wife, with whom he had been self-isolating in the town of Petrozavodsk, capital of the Karelia region in Russia's north-west.

This was probably not the first case, and it will not be the last. Valentina Frolova, coordinator for women's and children's rights at the Zona Prava NGO, told the daily newspaper Kommersant that the sharpest rise in calls for help from domestic violence victims would not come immediately after the introduction of quarantine measures, but possibly up to a month later.

Zona Prava is one of several human rights organisations to have recently set up a hotline for domestic violence victims. Unfortunately, it will be needed. Russia may need a lockdown to survive the coronavirus, but for some Russian women, the priority is to survive an epidemic of domestic violence.