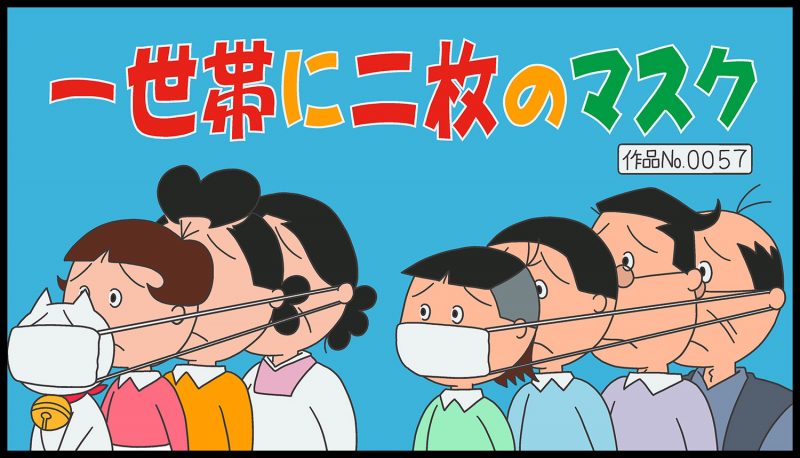 “Two masks per household”. The image, widely shared on social media, is a parody of popular television show ‘Sazae-san’, where multiple generations of one family live under one roof.

Update (April 6, 2020): Japan has declared a limited state of emergency as COVID-19 cases continue to climb throughout the country.

After Japan appeared to successfully contain COVID-19 in February and early March, there have been growing concerns the country is headed for a new explosion of infections. Measures announced in late March and early April by the government of Prime Minister Abe Shinzo to deal with the coming crisis have resulted in confusion, derision, and viral memes.

On April 1, after Japan's confirmed cases of COVID-19 had nearly quadrupled over the previous ten days, the government pledged to distribute face masks to 50 million households. However, public response to the plan was less than enthusiastic when it became apparent the scheme would only give two masks per family, and would not solve a chronic mask shortage in the country.

Besides a popular Japanese version of the “Downfall” meme that lampooned the Abe government's COVID-19 response, many took to Twitter to share parodies of the mask distribution scheme.

Using the hashtag #Abenomask, itself a parody of flagship Abenomics economic policy, the Twitter mashups incorporated stills from popular animated films, television shows and video games such as “Whisper from the Heart”, “Spirited Away”, “Pokemon” and “Sazae-san”.

“Two masks per household.” The Japanese Twitterverse was able to quickly ad-lib a response. It's great that there can be such a funny and whimsical outlook at times like these.

[Images, clockwise, from top-right]: Spirited Away; Dugtrio, a kind of Pokemon that appears in threes; Saze-san; Whisper from the Heart.

One image, widely shared on social media(see featured image, above) is a parody of the popular television show “Sazae-san,” where multiple generations of one family who all live under the same roof must share two masks.

By April 3, the Abe government had announced households that have seen their salaries impacted by COVID-19 would receive a one-time cash payment of 300,000 yen (3,000 USD).

Save for clusters of COVID-19 in Osaka, Wakayama, and parts of Hokkaido, Japan seemed to have largely contained COVID-19 in February and March, thanks to aggressively focusing on cluster identification and contact tracing since January. However, as in other parts of the world, in Japan there are concerns that some COVID-19 deaths are going unreported in official statistics, masking the real scale of the pandemic there.

As the disease spread around the world, the Abe government was criticized for focusing more on ensuring the 2020 Olympics continued as scheduled. However, on March 22 the Japanese Olympic Committee and the International Olympic Committee announced that the Olympics would be postponed until 2021.

On March 23, Japan reported a large jump in COVID-19 infections, resulting in calls for increasing social distancing, including shutting down non-essential businesses and allowing employees to work from home if they can.

While many Japanese people started to practice social distancing and remain at home during the month of March, the death of beloved (if sexist) comedian and entertainer Shimura Ken due to COVID-19 on March 29 brought home the reality of the pandemic to Japan.

On Monday, March 30, Tokyo governor Koike Yuriko made a “request” to Tokyoites to practice social distancing, while lacking any real legislative power to enforce such regulations. So far, the Japanese central government has resisted implementing its new Special Measures Law, which, similar to state of emergency legislation in other countries, could help encourage, if not enforce social distancing.

Due to Japan's existing constitution, which has strong protections for civil liberties, the Japanese government has a very limited power to compel businesses to close and citizens to stay off the streets. In a widely shared Twitter thread by Japanese-to-English interpreter Derek Wessman, who has worked as an aide in the Diet, Japan's parliament:

The Japanese word most used for lockdown is 封鎖; it *is not* in the Special Measures Law.

There is no “lockdown” legally available to the Japanese govt.

It can only force facilities/entities to close under strict emergency conditions.

Political leaders in regional Japan have also sent out mixed or simply confusing messages about the threat that COVID-19 presents to the nation. The governor of Ishikawa invited tourists from Tokyo and other parts of Japan to enjoy the “fresh air” of his prefecture, while the governor of economically important Aichi Prefecture suggested that infecting others with COVID-19 might be beneficial.

Governor of Aichi helpfully explains on television that “COVID, like influenza, gets better after you pass it on to someone else”…. 愛知・大村知事「うつって治るというのが感染症」→大炎上 https://t.co/g1fIgOp2H5

As in other countries since the start of the COVID-19 crisis, visible minorities in Japan have reported discrimination. For example, media attention has focused on a cluster of COVID-19 cases in the northeastern city of Sendai, supposedly ignited by a gathering of non-Japanese teachers at a pub.

However, a few days before, 52,000 people had been encouraged to gather in the same city to observe the Olympic torch relay, despite mounting concerns about the threat of COVID-19.

As the seriousness of the health threat continued to become apparent, foreign residents and visible minorities started to be blamed for COVID-19.

There are wild rumors flying around Japanese social media that “30% of COVID-19 cases in Japan are foreigners”. The Ministry of Health denies this and says they don’t keep track of the nationalities of cases, and that nationality was not a priority. https://t.co/w7JiggTJOB

Anti-foreign sentiment became overt when a Japanese legislator stated that only Japanese residents should be eligible for any government programs aimed at providing relief for the unemployed.

As other countries around the world have done, on April 1, Japan blocked citizens of at least 49 countries from entry. The measure also seemingly “locked out” non-Japanese residents who were traveling abroad from returning home, unless they hurried back quickly. Non-Japanese residents in the country expressed confusion and anxiety about their own status until immigration authorities announced a three-month extension for renewing visas.

Meanwhile, the uncertain situation in Japan has caused the United States and other countries to direct their citizens to come home.

“While we have confidence in Japan’s health care system today, we believe a significant increase in COVID-19 cases makes it difficult to predict how the system will be functioning in the coming weeks.” https://t.co/NNnrASWyP7