Guyana: Timeline of an election impasse

Will GECOM recount the ballots or declare a winner? 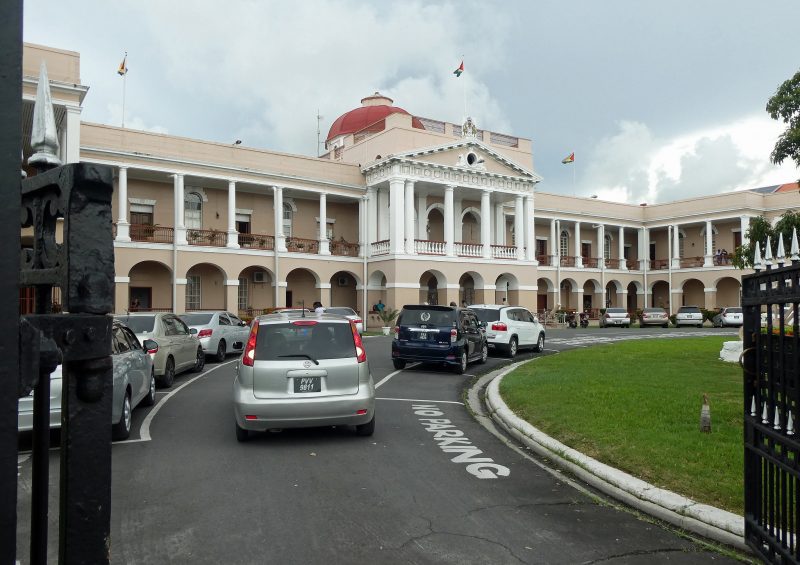 April 2, 2020 marks a full month since Guyana held its general election. The country's electoral commission, GECOM, has not re-verified votes cast in the contentious Region 4, but it has also not declared a winner — leaving the future of the next government in limbo.

The legal twists and turns along this journey have been numerous and complex. The Carter Center has called Guyana's 2020 election a “high-stakes” one: the country is on the verge of an economic boom, thanks to the recent discovery of massive oil reserves. In an effort to clarify the situation, here's a timeline of important events during the past month:

March 2: General elections are held, with voters turning out at polling stations across all 10 electoral districts known as regions.

March 5: Nine of the country's 10 regions declare results, at which point the opposition People's Progressive Party (PPP) leads by more than 50,000 votes. When the Returning Officer (RO) for Region 4, Clairmont Mingo, declares the outstanding district's results later that day, it appears that the governing coalition, A Partnership for National Unity/Alliance for Change (APNU+AFC), has enough of a margin in Region 4 to win the entire election.

There is controversy, however, over proper procedure. Allegations abound over the improper use of a spreadsheet: By law, results must be verified according to the official Statements of Poll. There are also reports of a data entry clerk having access to an unauthorised laptop and flash drive. The PPP is granted a court injunction barring Region 4's RO from declaring the results until they can be properly verified.

Meanwhile, there are reports of media personnel and election monitors being removed from GECOM headquarters. The situation prompts statements of concern from election observers.

March 10: Arguments pertaining to the suit are heard.

March 11: CJ George-Wiltshire rules that the Region 4 results were “unlawful” as they did not fall in line with the requirements laid out in Section 84 of Guyana's Representation of the People Act, which refers to the counting of votes polled.

Her nullification of Region 4's declaration, coupled with her order for GECOM to conform with the law, means that the final results of the country's general elections hang in the balance until the recount is properly conducted.

The same day, Caribbean Community (CARICOM) heads arrive in Guyana and urge President Granger and his governing APNU+AFC coalition to abide by the law.

March 12: GECOM requires observers to be newly accredited and limits the number of observers allowed per team as the Region 4 re-verification process is carded to begin. The process is stalled, however, when the results continue to be read from the contentious spreadsheet, in contradiction of the CJ's ruling.

The PPP files contempt proceedings against the Region 4 Returning Officer. The CJ makes it clear that the RO must read the results based on the Statement of Poll.

March 13: Region 4 verification recommences, though the approach is still unclear. The GECOM requests a location move to better facilities in downtown Georgetown, the capital.

The verification takes place in a shed in the yard of GECOM in Georgetown, at which the RO displays photocopies of the Statements of Poll — allegedly 19 with visible signs of alternations — and once again declares Region 4 for the APNU+AFC despite protests from people in attendance.

The OAS observer mission pulls out of Guyana over the “flawed” process, and international election observers express concern about the lack of transparency.

March 14: President Granger asks for an independent, high-level CARICOM team, led by Barbados Prime Minister and CARICOM Chair Mia Mottley, to oversee the recount of Region 4 ballots, in accordance with the CJ's March 11 ruling; the PPP agrees. In fact, the government and the opposition both go a step further, agreeing to a recount in all 10 regions.

March 15: The CARICOM team meets with GECOM and agree upon the conditions and parameters of the recount, which is scheduled for March 16. Containers with ballot boxes are moved to the Arthur Chung Conference Centre, where the recount is to take place.

March 16: The CARICOM team, along with other observers and stakeholders, arrive at the conference centre, but GECOM claims to still be working out the modalities of the process and denies them access.

At approximately 3:30 that afternoon, GECOM officials issue a press release stating that they need signed authorisation by President Granger, Opposition Leader Jagdeo and the CARICOM team before they can accommodate. They also advise that the building needs to be sanitised against COVID-19 before they can allow entry.

March 17: Ulita Grace Moore, who ran as a candidate for the governing coalition in Guyana's 2018 local government elections, successfully files an ex-parte injunction to block GECOM from acting on the recount agreement made with CARICOM.

GECOM is accused of deliberately delaying the recount to facilitate the injunction. Since the recount never began, the upholding of this injunction gives GECOM the freedom to declare the election result in the government's favour — something it has not yet done.

An injunction hearing is slated for March 20. Meanwhile, the two sides sign the CARICOM agreement, as requested by GECOM.

March 20: Justice Franklin Holder, the judge overseeing the injunction, hears arguments for both sides. Only four media houses are allowed entry to hear the proceedings, which reportedly take place in chambers.

While various regional voices call for President Granger to uphold his promise of having the recount done, APNU+AFC supporters accuse the PPP of playing a “dangerous game.”

March 27: Justice Holder rules against GECOM having to produce the Statements of Poll in court, having determined that he has jurisdiction to hear the matter.

March 30: The PPP appeals the decision and wins. Despite the governing APNU+AFC's adamance that it won the elections, the AFC arm of the partnership suggests a power-sharing arrangement with the PPP.

March 31: CJ George-Wiltshire discharges Moore's injunction and orders her to pay the PPP's legal costs. GECOM is now free to conduct the recount.

April 1: A GECOM meeting to decide the way forward is postponed, on the grounds that GECOM needs to “study” the court's ruling.

It is unclear whether GECOM will proceed with the agreed recount or declare a winner based on unverified results, and what effect Moore's decision to appeal the Full Court’s discharge of her injunction will have. The appeal is due to be heard today, April 2.