My brothers and I responded: 'Damn.' We know the historical weight of the term. 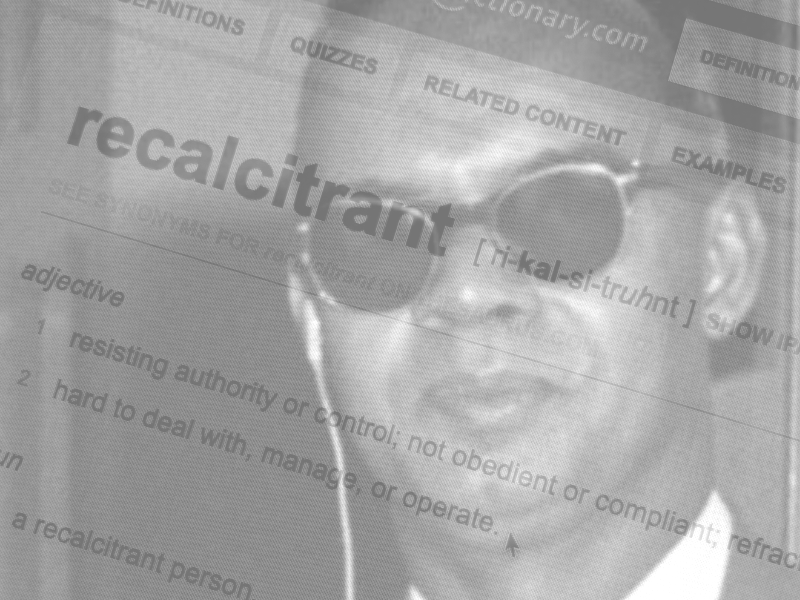 The original version of this piece was published on the author's blog.

You might be shocked to learn how much the word “recalcitrant”, especially when married with the term “minority”, is part of the popular vocabulary in Trinidad and Tobago.

As the noted scholar Gordon Rohlehr wrote in 1997, Trinidad and Tobago is a “young, multi-ethnic, multicultural, newly-independent state” (Rohlehr 1997, 849). The people of Trinidad and Tobago gained independence from Britain in 1962, but Rohlehr’s description of the society in 1997 as “young” and “newly-independent” still apply when we consider the long view of history. One hundred years in the life of a civilisation is a short time, and the cultural realities, social hierarchies and public attitudes that we wish would change (for the better) over time often do not.

On April 1, 2020, Prime Minister Keith Rowley, in one of the now-routine media conferences about COVID-19, opened his talk with a discussion of a number of issues. He gave context to the global situation of the coronavirus, the struggles of tourist economies, the government’s considerations of more humane conditions for prison inmates, in addition to an important justification of the state’s approach of using moral suasion rather than punishment and discipline with the instrument of the law at this time.

During his address, Rowley also used the phrase “recalcitrant minority.” Listening to the speech with my family, my brothers and I responded: “Damn.” We know the historical weight of the term. And we braced for the social media backlash.

Those who separate the intentions of language from its outcomes and resonances might refer to Rowley’s choice of phrase as a “public relations blunder.” Those who are attuned to how people feel might call it culturally offensive. And of course, those who are offended by the term might charge that it is fundamentally racist.

The term “recalcitrant minority” is specific to the history of Trinidad and Tobago and April Fool’s Day (April 1), and inextricably linked to the People’s National Movement (PNM), the political party Rowley leads, and its founder, Eric Williams, who went on to become the country’s first prime minister.

Before the prospect of single-state independence in Trinidad and Tobago, Williams campaigned for the West Indies Federation, a short-lived project that envisioned the formation of a political unit comprising of several of the Caribbean’s British colonies.

In March 1958, the Democratic Labour Party (DLP), in a bitterly-fought campaign that fueled racial animosity and mistrust, defeated the Williams-led PNM and affiliated West Indies Federal Labour Party in the Federal Elections. The defeat by the DLP, which received substantial support from Indo-Trinidadians, shocked Williams and emboldened his critics. It also bolstered Williams’ belief that the political vision of “West Indian nationalism” was being undermined by certain national and racial forces that opposed a federal project.

On April 1, 1958, in an address to his supporters at the University of Woodford Square, Williams sought to explain the possible reasons for the election results that, in his view, “pose[d] a dangerous threat to the stability of our country and new nation.” It is often mistakenly believed that Williams spent the entire speech disparaging Indo-Trinbagonians. What he was in fact attempting to do, was draw comparisons between the India of Jahawarlal Nehru and the “Indian nation” of local activists, calling the former progressive and invested in interracial solidarity, unlike the latter.

Colin Palmer, in Eric Williams and the Making of the Modern Caribbean (2006), recounts the episode as follows:

…Williams went on to denounce the Trinidadian advocates of “an Indian nation” as “the recalcitrant and hostile minority of the West Indian nation masquerading as ‘the Indian nation’ and prostituting the name of India for its selfish, reactionary political ends.” This was arguably, the most controversial and criticized speech that Eric Williams delivered during his long political career. (266)

Palmer argues that this “unfortunate use of language” was used by Williams’ critics as encompassing what they believed to be his overall attitude to the “entire race” of Indo-Trinbagonians. According to Palmer, “it is unlikely that this was his intention, since the PNM included many pro-federation and Indo-Trinidadians – as did the DLP” (266). Gordon Rohlehr, interestingly, has a somewhat different interpretation:

“It is not clear to this commentator whether by “recalcitrant minority” he meant Indo-Trinidadians or the cadre of French Creoles, other whites, off-whites and coloreds…” (857).

Williams’ legacy is complex, as was his relationship to the diversity of ethnic and social groups in multi-ethnic Trinidad and Tobago. He argued, for example, for the full participation of Indo-Trinbagonians in the political and cultural life of the society as well as his political party; but he discouraged the formal teaching of Hindi in schools, fearing that this would undermine the nationalist ethos of education. For Williams, making cultural distinctions between Indians (and Africans) was anathema to nationalism. Yet his desire for a non-racial nationalism was still fundamentally constructed on Afro-creole terms.

An examination of the historical background to the phrase “recalcitrant minority” helps illustrate the cultural reality of Trinidad and Tobago in the 1950s, and also the challenge faced by all of us governing in 2020. What is at stake here is neither the intent of language nor the dictionary meaning of this pair of words: we are here, rather, to understand, critique and learn from its cultural resonances. Ethnic, racial, cultural, gender, age differences are part of all societies. Historical knowledge is the precondition to working through them.

Who would ever have predicted that a speech made on April 1, 1958, would reverberate in April 1, 2020 through a speech made by another leader in the same political party? My intention here is not to discuss whether or not the prime minister had ill intentions in his use of the term—I cannot read his mind. But I can read language and put it into historical context. I am writing to push back against the ahistorical public responses that have copy-and-pasted or posted screenshots from Dictionary.com of the term “recalcitrant” to support their arguments that the term “recalcitrant minority” is not offensive to Indo-Trinbagonians.

Language is not neutral. Political meanings are a part of language. Whether it is Hillary Clinton’s description of young (black) offenders in the 1990s as “superpredators” or David Cameron’s racist dog-whistle against Sadiq Khan in the London mayoral election of 2016, political platforms give greater context to language because the discourses presented there reflect the intent and ideologies of public policy—or at least the mindset of public decision-makers.

The fact that he said “that famous phrase” demonstrates his awareness of the historical and political weight of the term—it was not a misstatement, but a deliberate use of language. What, however, is the utility of this term in a national conversation? How does it make the message more effective? When ethnic division and misunderstanding are part of our society, how does this choice of language challenge these problems?

A challenge to the Prime Minister to consider his choice of words is a challenge to all public leaders to consciously use language that includes rather than excludes. Washing our hands can help stop COVID-19 from spreading, but we cannot wash our hands of our history.