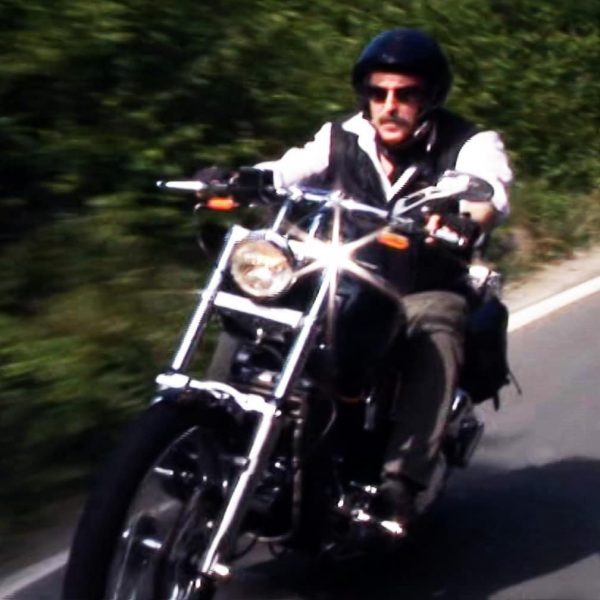 Italian comics author Giovanni Romanini died at 75 on March 20, 2020, in Bologna, the city of his birth, of a brain aneurysm. A public funeral will be scheduled after the end of the COVID-19 quarantine in Italy.

Colleagues, who affectionately called him “grandmaster,” or simply Giò, admired Romanini for the wide scope of his talent as a comics artist, which included pen drawing, inking, painting, and script-writing. 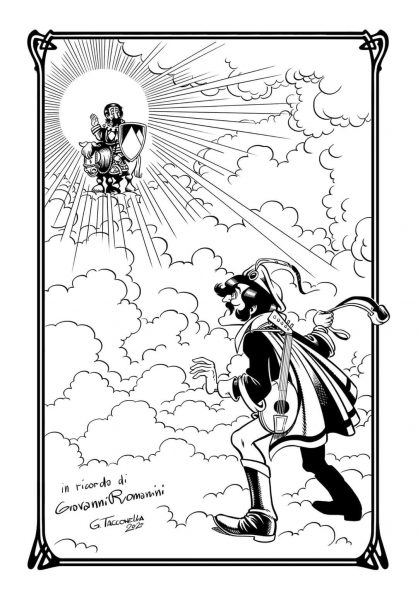 Tribute to Giovanni Romanini and Magnus, depicting them as characters from The Company of the Gallows: minstrel and slinger Bertrano and knight Sir Crumb. Cartoon by illustrator Gianni Tacconella, used with permission.

In his homeland, Romanini was acclaimed as a life-long collaborator of the late comics legend Magnus, the pen name of Roberto Raviola (1939-1996). The Italian newspaper La Stampa called Romanini “Raviola's squire” in an obituary.

Their collaboration began in the sixties with the series “Kriminal” and the book “Satanik,” both classics of the fumetti neri (“black comics”) genre—black-and-white crime thrillers with elements of horror and sex.

Their joint work continued with “Alan Ford,” a grotesque parody of the spy genre created by writer Max Bunker and Magnus, which Romanini helped illustrate. The acclaimed series celebrated its 50th anniversary in 2019, having achieved cult status across the former Yugoslavia (it's still printed in both Italy and Serbia).

After Romanini's death, some media outlets in the Balkans published obituaries describing him as “the illustrator of ‘Alan Ford’,” implying he was doing it on his own. He was actually one of several illustrators of the series, and in fact was only credited as such on the issues 114, 121, 124.

In the late 1970s, Romanini teamed up with Magnus again to produce “The Company of the Gallows,” a blend of epic fantasy and humor in a format similar to Alan Ford.

Comprised of 20 issues of 120 pages each, the story revolves around a ragtag group of Renaissance mercenaries and their misadventures in Europe, Middle East and Southeast Asia, inspired by the impressions from the authors’ actual travels to those places.

“The Company of the Gallows” (or “La Compagnia della Forca” in its original title) is regarded as Romanini and Magnus’ masterpiece. 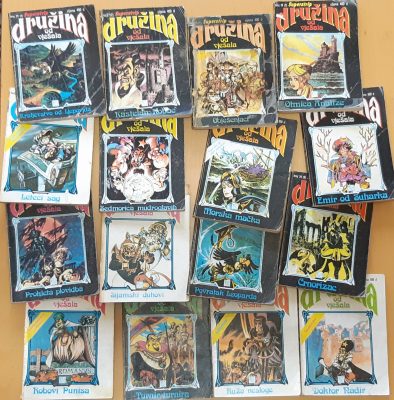 “Company of the Gallows” (“Družina od vješala”) in Croatian language, published in Yugoslavia in 1986. Photo by Filip Stojanovski, CC BY.

Many Yugoslav fans of Romanini's work only heard about him in 1986, when a Croatian translation of “The Company of the Gallows” came out. That was because Yugoslav publishers of licensed comics omitted the name of some collaborators, listing only the “stars,” such as Magnus and Bunker. That was the case with the Disney comics, which were extremely popular in Yugoslavia at that time — they also came signed as “Walt Disney,” even though Disney himself had died decades before.

During the seven years before his death by cancer in 1996, Magnus worked with Claudio Nizzi on a special project featuring Tex Willer, the main character of the influential Italian Western comics series “Tex.”

In the graphic novel “Tex: The Valley of Terror,” the ailing perfectionist Magnus ached to do justice to the beloved character and spent four years past the original publication deadline buried in the work. And when he decided he was not satisfied with the quality of his horse drawings, he reached out Romanini for help.

The following video shows Romanini's skill in drawing and inking Kit Carson, an iconic character of the “Tex” stories.

Giò ended up drawing all but four panels with horses in the graphic novel, having also helped with the inking. His contribution was recognized in the introductions of all editions of the book, which came out in Italy in 1996, in Croatia in 2013 and in Serbia in 2014.

The graphic novel by Nizzi and Magnus “Tex: The Valley of Terror,” 2013 Croatian edition by Strip-Agent, held in front of a mirror showing the covers in the background, and a panel with horses drawn by Romanini in the foreground. Photo by Filip Stojanovski, CC-BY.

Romanini's work on Tex resulted in a long-term working relationship with Sergio Bonelli Editore, the largest Italian comics publisher, which in southern Europe plays a similar role to that of Marvel in the US.

During his final decades, Romanini illustrated 30 issues of “Martin Mystère,” including memorable ones such as “Gods of Twilight.” This comics series enjoys significant popularity in Italy and across the former Yugoslavia, and has been published in other countries. It became a profitable franchise too, spawning an animated TV series and video games.

Many of Romanini's colleagues remembered Romanini's life on social media, often displaying photos of moments of joint endeavors that don't conform with the stereotype of the introvert geek usually associated with comics creators in the US.

For instance, comics writer and filmmaker Giovanni Eccher, who in 2007 directed a documentary about Magnus, posted a photo of Romanini riding a motorcycle at full speed, with the caption: “this is Giovanni Romanini for me.”

Indeed, many Italian comics artists lead very colorful lives, filled with adventures that would rival those of their fictional characters. One of those larger than life figures is Hugo Pratt (1927-1995), who spent parts of his life in Ethiopia, Argentina, and has children in Brazil.

Many comics authors who worked with Romanini would also fit the bill. The picnics for employees of Gian Luigi Bonelli (1908-2001), the creator of Tex Willer, included speedboat riding and shooting cans with Colt-45 revolvers. His son Sergio Bonelli (1932-2011) explored the Amazon rain forest, which turned out to be the setting for his “Mister No” series.

A character who never makes mistakes and always carries himself impeccably, is not an interesting character at all.