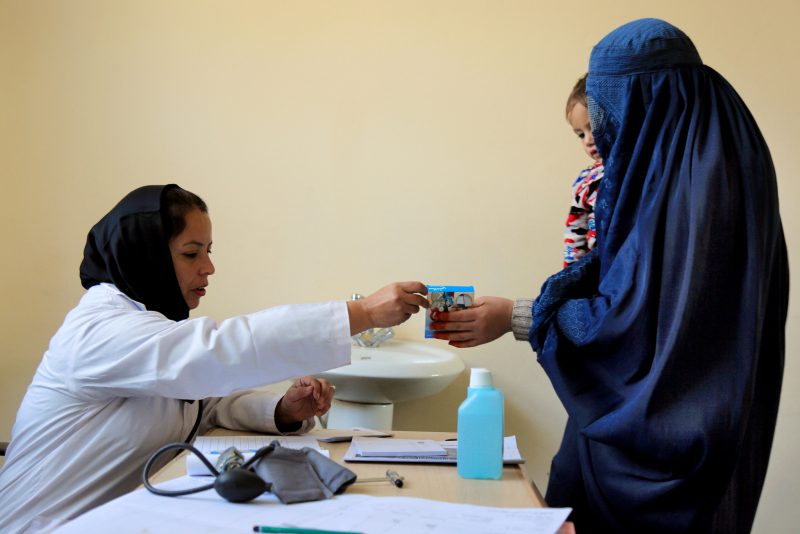 “SEHAT (System Enhancement for Health Action in Transition). The Hootkhail Hospital has female doctors as well, which makes the facilities accessible to those who could not visit otherwise.” Photo: Rumi Consultancy/World Bank. From World Bank Flickr account. Image license: CC BY-NC-ND 2.0.

Afghanistan is particularly exposed to the COVID-19 pandemic: many of its 32 million inhabitants have suffered decades of civil war that have weakened, if not entirely destroyed, the country's public health sector. Afghanistan also shares a border with Iran, one of the countries most affected by COVID-19. It thus comes as no surprise that Afghanistan is now registering its first cases of infection and death.

The first fatality was reported in the northern province of Balkh on March 22, as confirmed by the Ministry of Public Health. The second case was a 45-year-old woman in the western Herat province. By March 28, there were 174 confirmed cases of infection with the novel coronavirus, the virus that causes the disease, and a total number of three deaths.

The added challenge from returning refugees

One of the many factors making the fight against the epidemic even more challenging for Afghanistan is the large numbers of Afghan refugees living in neighboring countries such as Iran and Pakistan. While some of them are now forced to return to their country, others also chose to come back.

The Afghan government started implementing special measures in late March to fight the epidemic. After 32 cases were identified in Herat province on March 25, the government ordered to limit movements in three provinces. Given that Herat province is the gateway for many Afghan refugees returning from Iran, Wahidullah Mayar, the spokesman for the Ministry of Public Health, stated on March 25:

“Among the 30 cases in Herat, some of them have come from Iran. It shows that the virus is spreading in society.”

The flux of refugees coming from Iran has been confirmed by another state official, Ahmad Jawed Nadem, head of the Refugees and Returnees Department of Herat province, who stated that from February 20 to late March, an estimated 30,000 Afghans returned to Afghanistan voluntarily.

The Afghan Health Minister, Ferozuddin Feroz is not optimistic about the outcome of the epidemic, as he declared on March 24:

According to WHO [World Health Organization] predictions, there is the possibility of 16 million people [half of the country's population] becoming infected with the virus.

Based on the Afghan Health Ministry figures, 174 positive cases out of approximately 800 suspected cases have been reported so far.

Afghan culture is strongly centered around communities, and any social event such as a wedding, a sports competition, a religious event is traditionally open to a large crowd of extended family members, neighbors of the same district or village. As Health Ministry spokesperson Mayar says: “Our concerns are about those people who are gathering in one place.”

This image posted on March 22 is telling:

The government has taken special measures to start implementing isolation: it has limited movement in Kabul the capital of Afghanistan for three weeks. It has also reduced working hours in state offices by three hours and is providing paid leave to pregnant women and mothers whose children attend preschool.

One potential source of the contagion is open-air bazaars that are the traditional places for food shopping, but also social contact and exchange of news in Afghanistan. According to Abdul Qayum Rahimi, the governor of Herat province:

The case of the bazaars is being discussed, about changes for this upcoming Friday

The Afghan Parliament has also become a possible source of the pandemic. Health Minister Feroz announced that there are two suspicious cases among parliament members, which led the body to shut down for two weeks.

Yet despite the seriousness of the situation and the latest government decisions, it seems the majority of people do not observe the measures, and do not take the risks posed by the coronavirus very seriously.

#COVID19 cases jumped to 74 in Afghanistan + 4 cases at the RS mission.

MoPH Minister predicts the contagion would infect 25 million ppl out of an estimated 32 mil population in the country.

The Minister also predicts that 11,0000 people would if covid19 is not taken seriously.

This March 28 view of Kabul indicates not much has changed in the daily life of the capital:

Pashtun-wat square, Kabul quarantine day 01—seems everything is normal—the gov restricted all types of movements except few in Kabul city but looks like no one cares about #CoronavirusOutbreak. pic.twitter.com/WB6MSMsMaH