Hundreds of Croatians left homeless by earthquake amid COVID-19 crisis 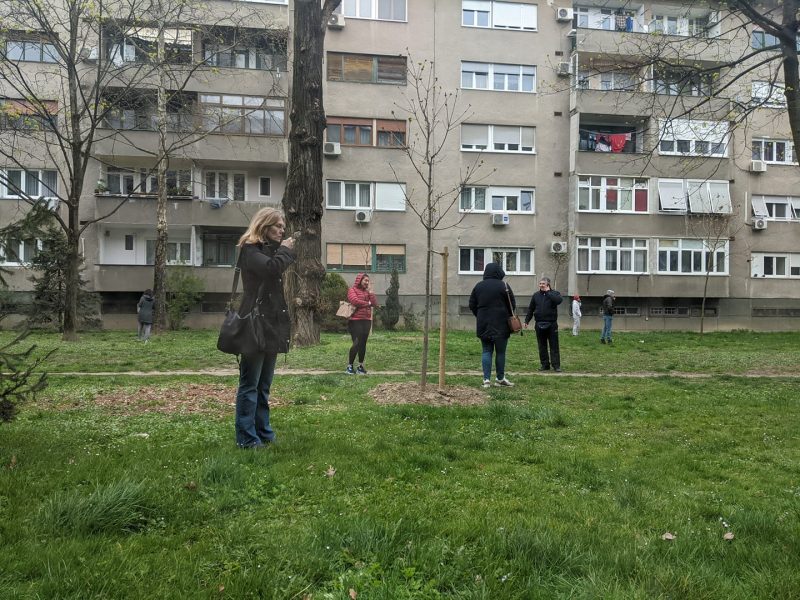 Citizens of Zagreb practice social distancing under the light snow after an earthquake forced them to leave their homes in the morning of March 22, 2020. Photo by Tomislav Medak, CC-BY.

The earthquake that hit Zagreb, Croatia, on March 22 left 26 people injured and one dead⁠—a 15-year-old girl who was hospitalized in critical condition and died two days later.

The quake hit shortly after the city had implemented restriction measures to slow the spread of COVID-19, bringing additional stress to Croatians.

A much-shared and commented Facebook post by activist and scholar Tomislav Medak captured the post-earthquake collective feeling. It was republished as an essay by several online publications:

The scene at 6.30 in the morning outside of my building was just surreal: waiting it out as aftershocks kept coming, people were abiding by the advised distance, standing meters apart. Each person isolated for themselves, freezing as the northern wind was turning the morning mist into faint snow. Everybody desiring closeness and warmth where none was allowed. Neither to enter back into the building to isolate nor to come closer to huddle together. Surreal. By the end of the day, the damage from the earthquake turned out to be limited, not many people got hurt, some were left without a roof, some friends too. Plenty of chaos for many people, possibly some super-spreading moments. At least, hopefully, we saw the last of the big tectonic activity.

However, amid the total lockdown due to the coronavirus, this was the straw that broke the camel's back. For weeks now we have been living day by day awaiting consequences of our collective isolation that will only have concretised — numbered in cases and deaths — two weeks later. Those “two weeks later” are an abstraction imposed on the concrete time that we are now living day by day. And yesterday, suddenly there was an irruption of reality. An earthquake that jolts you out of bed, out of that abstract time of a delayed threat into an immediacy of an existential threat — and breaks the camel's back. You are brought to the brink of tears. And that feeling of vulnerability has persisted throughout the day. It will take a couple of nights for the apprehension of a next jolt to wear off.

It's a minor trauma, and it will take some nights to wear off. I'm sure that you all, where ever you are amid this pandemic, are feeling this brink approaching, but there just might be no irruption of an earthquake to bring you across that bring. Hopefully, that remains so…

Over 20,000 people reported damages to their homes. The state has deployed 170 experts to assess affected buildings, and initial analyses indicate that some of them might have to be torn down entirely. Repair works will most likely be delayed as COVID-19 measures have reduced the available workforce.

Parts of the city are also without heating, as the quake damaged some of the gas distribution network⁠—a particularly worrying development as a cold front has caused temperatures to drop significantly this week in the region.

About 300 people decided to make use of the government-provided temporary housing in student dormitories, while others have moved out of the capital, or are staying with parents or friends. Citizens on social media expressed concern that this unexpected dispersion could increase the risk of contagion of COVID-19.

Minister of State Property Mario Banožić said on March 24 that the state will put at least 30 apartments at the disposal of affected families.

Authorities issued a warning about swindlers who have been praying on earthquake victims misrepresenting themselves as surveyors. They were charging for damage assessment, a procedure that the government is in fact providing for free.

Quite a few important public buildings suffered extensive damage during the earthquake and are now out of order. These include the parliament building, the rectorate of Zagreb University, and some museums. Citizens have been mourning the loss of cultural heritage over social networks:

The building that houses the Croatian Museum of Natural History had huge cracks on the roof and was immediately closed off to the public. Experts have warned of that a total collapse could be imminent and urged authorities to move the collection elsewhere quickly.

Leading news portal Index.hr fact-checked the often-repeated claim, even reproduced by Prime Minister Andrej Plenković himself, that the 5.3-magnitude earthquake was “the strongest that struck Zagreb in 140 years.”

Indeed, the Great Zagreb Earthquake of 1880 of 6.3 magnitude on the Richter's scale was the strongest ever recorded, but the city endured a 5.5 magnitude quake in 1905, and another of 6.1 in 1906, according to the data by the Seismological Service.

About ten other earthquakes with magnitudes of over 5.0 were recorded during the 20th century.

Donations asked at home and abroad

The Croatian government has opened a donation fund to help those affected by the Zagreb earthquake and the coronavirus. The campaigns are titled “Together for Zagreb” and “Croatia against coronavirus”.

To donate to “Together with Zagreb”

Donations from outside Croatia will go into the account of the Ministry of Finance with the Croatian National Bank, to the account number IBAN: HR12 1001 0051 8630 0016 0

“To donate to “Croatia against coronavirus”.

Donations from outside Croatia are paid into the account of the Ministry of Finance with the Croatian National Bank, to the account number: IBAN: HR12 1001 0051 8630 0016 0

Prime Minister Plenković announced that all members of the government will donate their March salaries to the account “Together for Zagreb” as an example of solidarity.

It was a bloody scary Sunday morning and my skyscraper swayed to and fro. I felt like I was on a boat and the earth never looked more far away from my twelfth floor. I am fine and our folks are fine. But some other people literally don’t have roofs over their heads. And it’s snowing in March, and the hurricane-style wind is blowing. It is not funny. They say Godzilla is coming to Zagreb on Friday and locusts are gonna fly around its head. Did I mention there is a Coronavirus around as well? In any case, donate, please.