Mukhtarli was released from prison in Azerbaijan on March 17 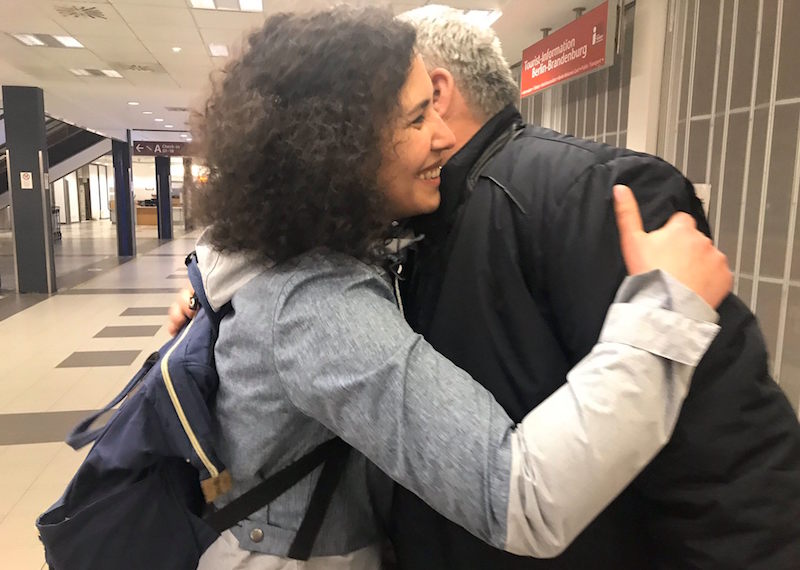 Leyla Mustafayeva hugs her husband, the journalist Afgan Mukhtarli, during his arrival in Berlin on March 17. Photo (c): European Centre for Press and Media Freedom.

On March 17, the Azerbaijani journalist Afgan Mukhtarli arrived at Berlin's Schönefeld Airport, where he was reunited with his wife and daughter. He had served nearly three years in an Azerbaijani jail — half of a six year sentence which was widely considered politically motivated and retaliation for his investigative reporting.

Mukhtarli's release is all the more significant due to the scandalous cirucmstances of his arrest — or rather, his abduction.

On May 29, 2017 Mukhtarli left his home in Tbilisi, the Georgian capital, to meet a friend at a cafe. At 19:00 he rang his wife, the journalist Leyla Mustafayeva, to tell her that he would shortly be home. But he never arrived. 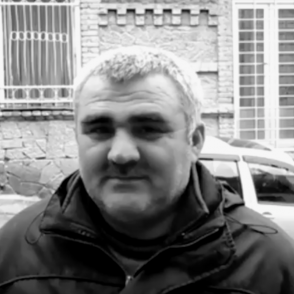 Instead, Mukhtarli surfaced two days later in a detention cell in the Azerbaijani capital of Baku. He told a lawyer that he had been seized by men wearing Georgian police uniforms who stuffed his pockets with banknotes, bundled him into a car, and drove him across the border into Azerbaijan, where he was arrested for illegal border crossing and smuggling money. The Georgian prime minister denied all accusations that his government had any complicity in the arrest, but many remained sceptical. Over the years prior to Mukhtarli's arrest, Tbilisi had become a home for a thriving community of political dissidents and independent journalists from Azerbaijan, who were attracted by Georgia's relative freedom of expression.

But now, they started wondering who would disappear next, and whether Georgia was really a safe haven after all.

Since 2015, Georgia had been that safe haven for Afgan Mukhtarli. That was the year when he and his family left Azerbaijan after harassment due to his investigative journalism. Mukhtarli had collaborated with MeydanTV, the exiled independent Azerbaijani media outlet, and the Organized Crime and Corruption Reporting Project (OCCRP) on high-profile investigations implicating state officials, sometimes even the Aliyev family, which has ruled Azerbaijan since 1993. It was the type of work which was bound to ruffle feathers.

I interviewed Mukhtarli about his experiences and his hope for the future. His answers, given in Azerbaijani, were translated by his wife Leyla Mustafayeva.

Maxim Edwards: Why do you think the authorities released you? And why did they choose to do so now?

Afgan Mukhtarli: My release was thanks to pressure by members of the Council of Europe (CoE) and the European Parliament. [CoE Commissioner for Human Rights] Dunja Mijatović and [Icelandic politician] Þórhildur Ævarsdóttir even visited me in prison. It was also due to negotiations between the Azerbaijani and German authorities, which began last October. They were very helpful; as I didn't have any documents with me when I was kidnapped and brought to Azerbaijan, the authorities provided me with a passport once these talks had started. The German authorities had granted me a visa last year to reunite with my family, but I was not released at the time; there were multiple court hearings about my case in late 2019. I even heard rumours that [President Ilham] Aliyev was planning to sign a decree pardoning me this March. That also never happened, but I was eventually released a bit later, after the parliamentary elections.

ME: So is the lesson here that media campaigns and advocacy really do work in these circumstances?

AM: Sure, the media campaign had a big impact and I'm very grateful. In Georgia there was a lot of noise about it; many media organisations covered the news and campaigned for me. They raised public awareness in the Caucasus and worldwide. But the campaigns, the protests in European countries didn't just trigger my release, they also helped me in other ways. They probably changed the way I was treated in prison. I'm sure that if there had not been any such campaigns, I could have faced a much, much harder time in prison. I hope that this publicity continues, and that it puts pressure on the authorities over how they treat political prisoners in Azerbaijan.

ME: And how would you describe the conditions of your imprisonment? How were you treated?

AM: After I crossed the Georgian border and was handed over to the Azerbaijani authorities, I wasn't tortured. But there were plenty of other restrictions: on phone calls, meetings with relatives, and so on. I wasn't allowed to meet with my mother, brothers, or any other relatives for six months. I didn't have any access to my family, to my wife, for a year. I couldn't contact friends over the telephone. I had several lawyers, but the one I met with most frequently in prison was Nemat Kerimli. His licence to practice law was suspended [in 2018], I think because he was working with me. The deputy chairman of the prison [Emin Eminaliyev] was very aggressive towards Kerimli and confiscated all the documents he had after our meeting in prison. That was a violation of confidentiality between me and my lawyer. I tried to file a complaint to the court, but they refused to even consider it, giving different excuses. [In September 2019, Mukhtarli went on hunger strike in protest at this alleged mistreatment of his lawyer — ed.]

Political prisoners were controlled twice as tightly as the other inmates. We couldn't have books with any political content. When I raised the subject with prison staff they told me that those restrictions had nothing to do with the state penitential service. They said they received theose orders from the presidential administration.

AM: No, I don't think Georgia is a safe country. Even today, I'm convinced that the Georgian authorities — the chief prosecutor's office, the law enforcement agencies— are just going to repeat the same statements they've made before. They can't do anything else. If they admit that I really was kidnapped in Georgia and handed over to the Azerbaijani authorities illegally, that could result in the resignation of the Georgian government. The ruling party isn't prepared to risk losing its authority over the kidnapping of one journalist. They won't say anything.

I've been free for over a week now. In that time, I've given a lot of interviews to the Georgian media. I've even accused the Georgian side of receiving bribes for my abduction. But nobody from the Georgian authorities has said anything about my release or my comment about bribery. Earlier, the Georgian prosecutor's office made excuses, accusing the Azerbaijani side of refusing to allow them access to me. They said that as they had not been able to question me in prison in Azerbaijan, they were unable to carry out a proper investigation. But now I'm free. And nobody from the Georgian prosecutor's office or law enforcement has contacted me yet regarding my testimony.

ME: Since your release, there have already been more high profile arrests of opposition figures in Azerbaijan. Some observers wonder whether this is the start of another wave of political persecution. What are your predictions?

AM: Oppression of activists and civil society never really relaxed. The authorities are aggressive towards independent and critically minded people in Azerbaijani society. So my release alone doesn't mean that the authorities are going to soften their attitude towards them. Remember that there are still more than 100 political prisoners in Azerbaijan. The political situation in general has been harsh since 1993, but things have deteriorated even more since Ilham Aliyev took power in 2003. It's generally a bad atmosphere for journalists. Around three journalists have been killed in Azerbaijan in recent years: they are Elmar Huseynov, Rasim Aliyev, and Rafiq Tagi.

The blogger Mehman Galandarov was found dead in prison in 2017. I suspect that Galandarov's death was related to my arrest: he was arrested just a month before I was kidnapped. He had also lived in Tbilisi and attended protest rallies in front of the Azerbaijani embassy. One day, he had to return to Azerbaijan for family reasons and was detained once he arrived. Three months later, he was found dead in pre-trial detention. There were other arrests too. The same year, the opposition activist Gozel Bayramli was arrested when she returned to Azerbaijan from Georgia. I suspect that all these arrests were somehow connected and coordinated by the Azerbaijani authorities.

What's next? Before the Nowruz Holiday, Ilham Aliyev gave a speech addressing the political situation in the country and his plans for fighting the coronavirus. The president said that the authorities will fight against the “fifth column.” A few days later, [opposition leader] Tofig Yagublu was detained. I don't think his arrest will be the last. I think there will be more arrests in the months ahead.

ME: Now that you're out of jail, what are your plans?

AM: I'm going to rest for a while. I'm in a European country right now, so I plan to learn the language and eventually return to my work. Due to my abduction, there were several investigations which I couldn't complete. I hope I can contribute to the democratisation of Azerbaijan.

I may have changed location, but I haven't changed my goals.