No coronavirus cases in Donetsk and Luhansk, say separatist authorities

Ukraine's breakaway territories are in a state of lockdown and unease 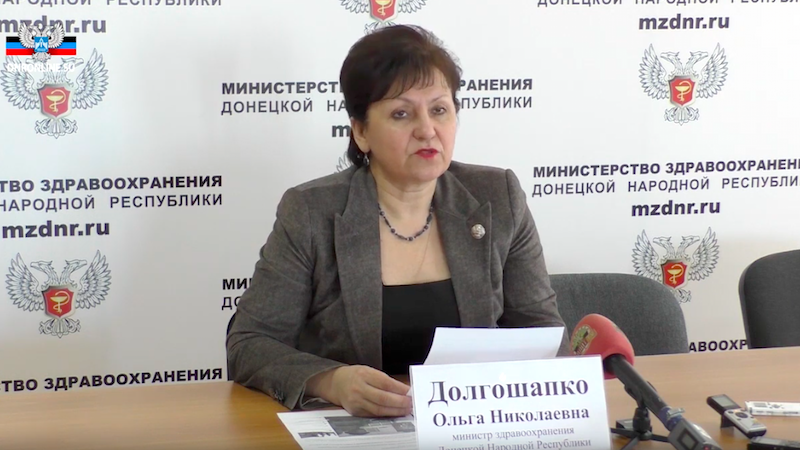 Peace may not have reached eastern Ukraine yet, but neither has the coronavirus.

At least, that's what is claimed by de facto officials of the Donetsk People's Republic (DNR), one of two breakaway territories in war-torn eastern Ukraine. In a press conference on March 24, the “DNR's” de facto Minister of Health Olga Dolgoshapko claimed that no coronavirus cases had been confirmed in the territory to date. Nevertheless, de facto state media report that 71 people are “under observation” in hospital and that 247 people are self-isolating. On March 25 Leonid Pasechnik declared that the Luhansk People's Republic (LNR) was also coronavirus free. The de facto Minister of Healthcare of the LNR, Natalia Pashchenko, added that 60 people are currently “under observation” in the smaller of the two breakaway territories.

Around three million people live under the control of the two separatist regimes, which declared independence from Ukraine in April 2014. The war which ensued has claimed the lives of over 3,000 civilians; more than one and a half million have been displaced. To this day, the “DNR” and “LNR” are internationally recognised as Ukrainian territory; although Russia does not formally recognise their self-declared independence, it provides extensive economic, political, and military support and direction to the separatist governments.

Government controlled Ukraine is currently under lockdown, with closed borders and 162 confirmed coronavirus cases. Meanwhile, the coronavirus epidemic has hit Russia hard, with over 840 confirmed cases and a surge in diagnoses of pneumonia. Moscow responded by closing all its borders on March 17, including those with eastern Ukraine. But on March 23, the same day that the “DNR” closed its own crossing points into Ukrainian government controlled territory, Russian Prime Minister Mikhail Mishustin made an exception to the Kremlin's order: “in light of the economic blockade of the territories,” he ruled, Russia would open its border to anybody with permanent residency in the Donetsk or Luhansk regions, regardless of their citizenship. In any case, the separatist authorities aren't taking any chances even where their benefactors are concerned: as of March 25, the “DNR” Ministry of Health mandated even those arriving from Russia and the “LNR” to self-isolate for 14 days, whether they have symptoms or not.

It bears repeating that the coronavirus and the restrictions to contain it could have dismal consequences for inhabitants of an already volatile region, particularly for elderly people who have until now been able to cross the front line into Ukrainian government controlled territory to receive pensions from Kyiv, to which they are still entitled.

It is hard to receive much accurate information from Donetsk or Luhansk. Independent journalism critical of the de facto authorities is difficult if not impossible to conduct.This is compounded by the fact that reporting on the separatist territories by Ukrainian news outlets can also be unreliable. A recent newsletter from CivicMonitoring, a German Foreign Ministry funded project to monitor human rights violations in eastern Ukraine notes the following:

While the separatists did not confirm any infections with the new virus, both sides used the crisis to spread disinformation about each other. The Donetsk separatists claimed on 11 March that tuberculosis and pneumonia were rampant among Ukrainian servicemen stationed along the Contact Line. And Ukrainian Interior Minister Arsen Avakov said on 13 March that there were 12 cases of infections in Horlivka, the second-biggest city inside the “DNR” – the Donetsk Health “Ministry” denied.

Meanwhile, news outlets loyal to the de facto “DNR” and “LNR” authorities claim a degree of normalcy in Donetsk and its environs, or as normal as life can be after nearly six years of armed conflict and isolation. International outlets have made similar observations:

“Over six years, we've adapted to living in crisis situations,” a florist living in Donetsk told the German online channel OstWest on March 20. Panic buying? She hadn't seen any, she said with a shrug.

There are signs that things have since changed. On March 24 a member of Tipichny Donetsk, a group about developments in the eastern Ukrainian city on popular Russian language social media network VKontakte, shared a photo from a branch of the First Republican Bank recommending its clients to enter the premises wearing masks. “I work in the building materials market and there aren't any masks left,” responded one user. And although de facto state media insist that supermarket shelves are full, social media More recent posts in the same group attesting to the well stocked supermarket shelves in the city are met with incredulous responses from locals: “where has all the buckwheat gone?” asks one. “There's no milk left for 17 roubles, only brands for 40 roubles or more,” reports another.

Even before the territory closed its borders, the de facto authorities announced emergency measures. A March 14 executive order issued by Pushilin demanded “heightened preparedness” and ordered medical staff to be present at border crossings to test temperatures of all travellers and demanded that people returning from affected countries self-isolate for 14 days.

Although these measures do not amount to a full lockdown or quarantine, they do encourage social distancing. Since March 19, schools and kindergartens have been ordered to conduct “distance learning.” According to Donetsk videoblogger Ivan Likhachev, as of March 21 cinemas and theatres in the city were closed, although public transport services continued. Accordingly, Pushilin's decree also banned state institutions such as the Ministries of Sport and Culture from holding mass public events with more than 1,000 participants until at least April 10.

Nevertheless government officials including Pushilin himself appear to be holding meetings as usual:

Regardless of the pandemic, Pushilin has stressed his determination to hold a large parade for Victory Day on May 9, which thousands are expected to attend in commemoration of the Soviet Union's defeat of Nazi Germany. This year's parade has a special significance: in December, he declared 2020 to be the “year of great victory.”

The separatist leader has instructed his staff to consider “alternative means” of holding the parade if the situation deteriorates. Nevertheless, Donetsk locals on VK groups castigated his determination to hold the event as irresponsible.

So social media networks certainly indicate that online users in the “DNR” and “LNR” are aware of the dangers of the virus. The de facto health ministry of the DNR has opened a telephone hotline for citizens. But it is also not difficult to find complaints about how the de facto authorities have handled the crisis, and their level of preparedness. Just as news outlets based in the breakaway territories suggest that local healthcare systems are well prepared, so Ukrainian media such as online magazine Apostroph report that hospital wards in Donetsk and Luhansk now hold patients with pneumonia and extreme respiratory distress.On March 18, Ukraine's Ombudsman for Human Rights wrote on Facebook that the prior week, over 600 locals in the breakaway territories had contacted the authorities complaining of flu symptoms.

De facto healthcare officials in the “DNR” have not confirmed or denied these claims, although on March 16 Dolgoshapko unexpectedly claimed that over 40 people had died of swine flu since the start of the year.

What can be said is that both the breakaway territories are largely dependent on Russian assistance when it comes to stemming the coronavirus pandemic. The Ukrainian publication Focus, citing an interview with a Donetsk medic, claims that Donetsk has just 20 ventilator units to hand. The ability to locally produce masks and sanitiser en masse, as separatist media outlets claim, may not be enough. This could be why, as several Ukrainian media outlets claim that last week, a team of 40 medical specialists from Russia are reported to have inspected facilities in the breakaway territories to assess their readiness to deal with the pandemic. A convoy of medical supplies, state the same Ukrainian media sources, is underway and will complete delivery by April 1. No reference to such a convoy can be found on Russian or separatist websites.

The biggest mystery is perhaps the most obvious: how are local medics able to test for the virus in the first place?

In her most recent update on the medical situation, Dolgoshapko suggested that several of the hospitalised patients had already been tested for the coronavirus, from which it follows that testing systems are available to the “DNR.”

Ukrainian officials seem sceptical; in the same Facebook post, Denisova also stated that to the Ukrainian government's knowledge, neither territory had testing systems to distinguish these symptoms from coronavirus. Thus the origin of these testing systems allegedly used by local medics has been by far the largest cause for speculation in the Ukrainian media. Novosti Donbassa, a Ukraine based independent news site staffed by journalists who fled the region after 2014, claims that the “DNR” does not actually have the facilities to analyse the test samples they collect, citing a senior de facto health official.

If the separatist authorities in eastern Ukraine have received coronavirus testing kits, they are probably provided by Russia. As RBC reports, on March 12 the Russian government sent 800 “Vector” testing kits each to several post-Soviet states alongside Mongolia and Iran. The journalists of Novosti Donbassa noted that media under separatist control were not eager to discuss the issue:

We've noticed that “DNR” television channels and other media are trying not to advertise that the test systems in [the authorities’] possession were received from Russia. Only one channel mentioned this in its dispatches from Donetsk labs, while the others cut it out. Nobody has mentioned the number of test systems at all.

Having severed themselves from the rest of Ukraine, it looks very likely that the rulers of the “DNR” and “LNR” will have to depend on Russian assistance to fight off the pandemic for them. Whoever that task falls on, it can only be hoped that they have some success — for one of the few hopes which bridges political divides is that the Donbas does not need more civilian deaths.

As one VK user noted:

Look, in any case it'll get to us, that has to be understood. That's why test systems, beds, ventilators and additional medical personnel have to be found. Just hoping that it will pass us by is too naive.