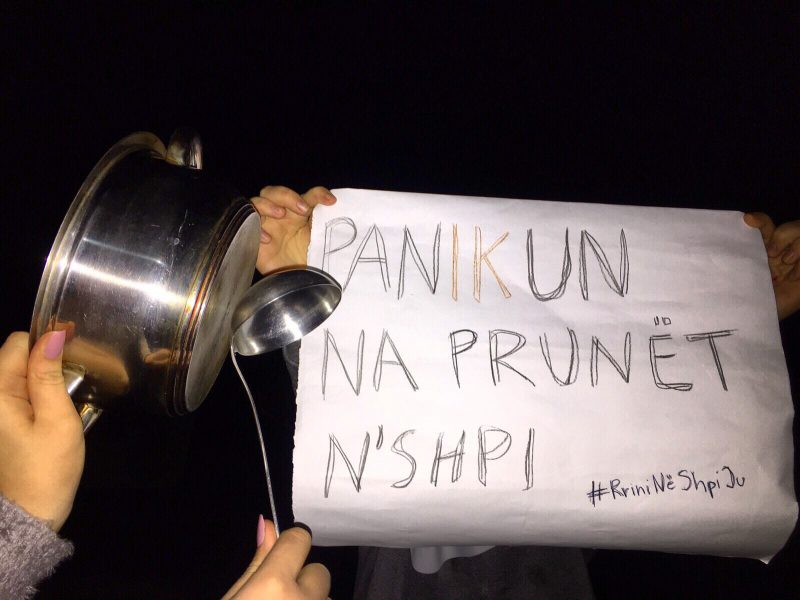 Banging pots and pans in Kosovo with a sign reading “You are the ones who brought the panic in our houses” and hashtag #StayAtHome in Albanian. Photo by Adelina Tërshani, used with permission.

After a 12-hour session, the Kosovo government lost a no-confidence vote on March 26 despite vehement opposition by citizens who would rather see authorities united against the COVID-19 pandemic.

By 82 votes to 32, with one abstention, MPs ousted Prime Minister Albin Kurti, the leader of the Vetëvendosje (“self-determination” in English) party at the behest of his former coalition partner Democratic League of Kosovo (LDK).

Recent emergency measures against the coronavirus outbreak exposed tensions in the fragile coalition between the Vetëvendosje and the LDK, which established a government only 52 days ago.

On March 18, PM Kurti sacked Interior Minister Agim Veliu, from the LDK, over disagreements about declaring a state of emergency, which would give President Hashim Thaçi, also from the LDK, a lot more power.

The coalition deteriorated further when the PM announced a curfew that Thaçi considered unconstitutional.

The Government decides on a curfew.

The President calls on Kosovo police not to implement it, considering such a measure unconstitutional.

In ?? we are dealing with Covid-19 in a most peculiar way – disciplined citizens and chaotic politicians.

Please don’t try this at home.

#Kosovo political struggle has reached a new level with Thaci now asking citizens to ignore government's new restrictions on movement from 10am-4pm + 8pm curfew, saying they are unconstitutional. He wants a state of an emergency which would, conveniently, give him much more power

Quarantined at home, Kosovars have staged cazerolazo-style protests — banging on pots and pans from windows and balconies — in objection to the no-confidence vote that many fear will throw the country into constitutional chaos amid the pandemic and looming global economic recession.

To date, Kosovo has 86 confirmed cases of COVID-19 and one death from the disease, according to official data by the Ministry of Health.

Today in political absurdity: While the whole world rushes to stop the spread of #COVID19, the Kosovo parliament meets to topple the government of firebrand PM @albinkurti. As other European govts extend their mandates, this parliament will leave the country without one. pic.twitter.com/aaGWTdkoRr

Facing a convulsed political scene and an imminent COVID-19 breakdown, local activist group Replikë called for a non-violent protest from the balconies and windows on Facebook:

Here's the best footage as #Prishtina residents take to their balconies to protest with pots and pans against LDK plans to overthrow the government of #Kosovo in midst of the #covid19 crisis. pic.twitter.com/H2ZbUK7qmj

Protests were held every night at 8 p.m., except for March 25, when it was held at 11 a.m., at the time of the no-confidence motion.

The political situation in Kosovo is not improving. The demands of thousands of citizens are being ignored by the political class after five days straight of protests. On the other hand, cases of viruses are increasing in Kosovo. We will make noise until the politicians hear us.

As reported by independent outlet Kosovo 2.0:

The marathon session of the Parliament was held despite the government ban on gatherings, deputies wore masks over their mouths and noses throughout, while journalists and other guests were banned in order to allow the deputies more space to retain a 1.5-meter distance between them.

Dozens of Prishtina citizens came to protest in front of the assembly building, most of them wearing masks and being careful to maintain the required 2-meter distance from each other. They held handmade signs that read “against the motion.”

The decision to initiate a no-confidence motion has been criticized by the German and French embassies. Vjosa Osmani, the vice-chair of LDK, also declined to support the motion at the time it was announced.

Ambassadors of ?? and ??joint demarche to Deputy PM Hoti stepping in for Chairman M. Mustafa to voice concerns of both capitals.
Stay at the side of Kosovo people in crisis. Invite LDK to reconsider no-confidence vote and maintain trusted and stable government to face challenges.

On the other hand, the United States has welcomed the government changeover, as President Thaçi is perceived to be more favorable to a Trump administration peace deal with Serbia that former PM Kurti vehemently opposes.

Many remembered how the pots-and-pans protests resembled those against the Milosevic regime in the 1990s. A letter from the editor of Kosovo 2.0 said:

(…) But I do remember a night in the 1990s, at age 6, grabbing a pan and spoon and joining my two older sisters on the balcony of our family home, hitting the pan and shaking keys. This was one of the many ways through which protest was expressed at that time. The metallic sound reverberated throughout our neighborhood in Prishtina, and it most probably added to a cacophony of discontent throughout the city; similar snippets are just as much a part of other people’s recollections of how the decade began.

On a March 21 article for the daily newspaper Koha Ditore, former politician and journalist Veton Surroi voiced similar feelings as he reminisced the anti-Milosevic pot-banging protests, a workaround the police curfew in place at that time. He added that he is sorry to see that a new political crisis forced citizens to do the same 30 years later.

Editor's note: The author of this story is a researcher at the project “Building knowledge about Kosovo (3.0),” funded by Kosovo Foundation for Open Society.