Can Zimbabwe handle the coronavirus amid a collapsing health care system?

In remote areas, 'some are clueless of this pandemic' 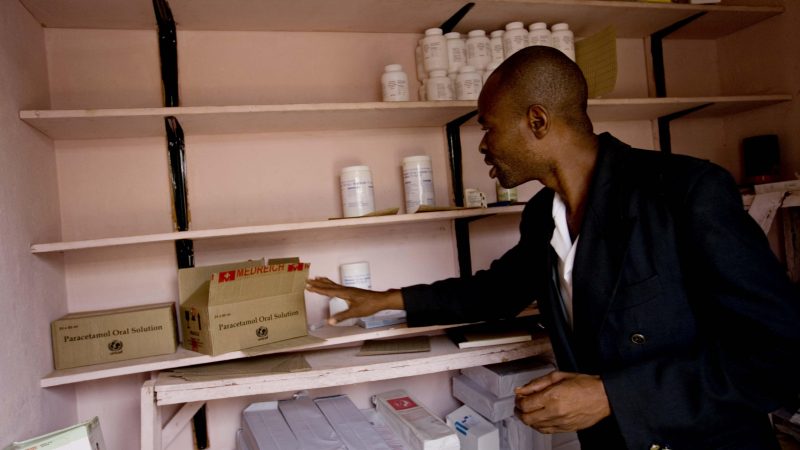 A health worker points out what few drugs he has left in his stores in a health center, Mazoe, Zimbabwe, April 22, 2009. Photo by Kate Holt / AusAID via Wikimedia Commons CC BY 2.0.

As the government of Zimbabwe confirms the first COVID-19 casualty in the country, many Zimbabweans have questioned Zimbabwe's capacity to handle a public health pandemic of this magnitude.

The nation's fragile health care system combined with its poor record of internet access has citizens on high alert — and already grieving.

Zororo Makamba, 30, succumbed to complications from the coronavirus on the morning of Monday, March 23, 2020, at Harare Wilkins Infectious Diseases Hospital, where he was admitted after showing symptoms.

Makamba was popularly known for his explainer video series, “State of the Nation with Zororo.” He was the son of a prominent businessman, James Makamba.

The Minister of Health and Child Care, Dr Obediah Moyo has confirmed the death of Zororo Makamba, who was the second person to test positive for Covid-19 in Zimbabwe.@GNyambabvu @EMupoperi @JoshMunthali @nickmangwana @MoHCCZim @lizmaggz @samaita44 pic.twitter.com/XIqHLiezR2

Mutumwa wrote on Twitter, “let us pause and reflect”:

Mr Zororo Makamba, the son of Mr James Makamba has passed on. MHSRIEP. I have just learned of this tragic loss of life due to the virus. A giant with so much potential has fallen. Corona is real. Let us pause and reflect. Life is too precious.

Zororo is the second case of coronavirus reported by the Minister of Health and Child Care Obadiah Moyo last week.

Moyo announced the first confirmed case was a British national who resides in Victoria Falls. The 38-year-old male had traveled to Manchester, England on March 7 and traveled back to Zimbabwe on March 15 from Manchester, via South Africa.

Upon arrival, the patient went into self-quarantine on the advice of Moyo, according to The Chronicle. However, after developing “severe respiratory distress,” he was admitted to Wilkins Hospital, where he tested positive for the virus.

With two confirmed cases as of March 26, according to WHO, Zimbabweans have no choice but to brace themselves for potential disaster.

On Wednesday, Zimbabwe's doctors and nurses went on strike to protest a lack of personal protective equipment (PPEs) necessary to treat patients with the highly contagious virus.

Even before the coronavirus crisis reached Zimbabwe, its health care system was collapsing, and families have been expected to provide their own gloves and clean water for basic treatment in health care facilities, according to Time magazine.

Doctors and nurses had only returned to work in January after a four-month strike to demand higher salaries and improved working conditions, according to Time.

President Emmerson Mnangagwa last week issued an announcement banning gatherings of more than 100 people in an effort to slow the spread of the virus. Mnangagwa also ordered the closure of schools, colleges and universities on Tuesday.

Why are we not having a realistic discourse about #COVID19 in Africa- the first fatality in Zimbabwe died gasping for air, doctors on strike as no protective gear, no water in hospitals. People who stay at home have no income and no food

Thobekile Matimbe, a human rights advocate in Zimbabwe, wrote a Facebook post on March 23, sharing her concerns about Zimbabwe's state of unpreparedness:

I am concerned about the state of unpreparedness that our country is in. A friend of mine battling to save lives in UK while at risk said the Covid Beast is real. I see my fellow citizens in denial that this can happen to us. No one is immune. The cities and towns are buzzing with life. Business as usual. What signs do we need? People are dying. Are we seriously waiting to be told to stay at home.

Matimbe also raised concerns about sharing basic public health information related to COVID-19 due to a systemic lack of internet access and the high price of data in Zimbabwe, on March 26:

Access to information is a fundamental right. This means internet access is most critical as we stay home. I wonder how our communities are faring with all the news on Covid-19. What are the strategies our governments have put in place for this? How can we all access the internet? Sadly, in the remote parts of our country, some are clueless of this pandemic. Digital access is a fundamental component of the right to information. A friend of mine keeps highlighting that she can't open some of these informative videos in circulation and she is right. The price of data at this point must promote access to information.

As civil society, we commit to assist and work with government in fighting COVID 19, and we implore everyone in Zimbabwe to be compliant with directives from the health and national authorities in the interest of our health and the collective interests of our nation. As much as possible, we must drive prevention while preparing for the worst.