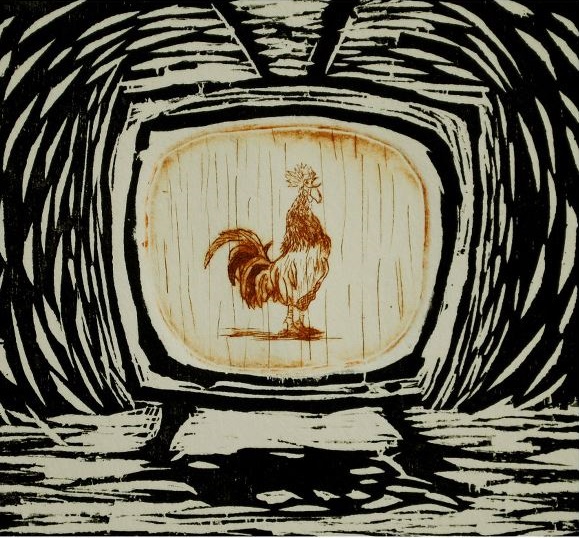 “We begin!” woodcut and drypoint 10x10cm. Image used with permission.

Engraver, woodcut artist, and printmaker Antonio Waco Ponce Muñoz’s desire is to expand the teaching of traditional Mexican engraving in Chiapas, Mexico’s southernmost region and one of its most impoverished [1] states.

Mexico has a prolific tradition of printmaking [2], recognized in Mexico and by its international fandom as a form of art. Its defining visual characteristics have endured from pre-Hispanic times [3] well into modernity [4]. A vast expanse of art movements [5] has employed engraving as a tool for expression and identity, generating a compendium of Mexican themes [6] in the process.

Muñoz's work takes inspiration in the culture of Chiapas, a state in the southeast of Mexico that is home to a sizeable Mayan population, where languages ​​such as Tzeltal [7], Tzotzil [8], Ch’ol [9], and Zoque [10] are widely spoken [11]. Another hallmark of Chiapas’ tourism is its exuberant nature, with the Lacandon Jungle [12] its beating heart.

I have spoken to Ponce about his work. This interview has been edited and condensed for clarity.

Alejandro Barreto (AB): How did you come to devote yourself to the art of engraving?

Antonio Ponce (AP): I decided to become a printmaker after I was introduced to engraving techniques at the age of 21. I wanted to know the history of Mexican graphic art, with the Taller de la Gráfica Popular (TGP [13]), for example, or the League of Revolutionary Writers and Artists [14]. I was drawn to these movements because they caused an awakening in Mexican society in the early 20th century.

Along similar lines, it is important to me to know the history of Chiapan graphic art and renowned masters like Franco Lázaro Gómez [15], Ramiro Jiménez Pozo [16], and Máximo Prado, who were invited to work in Mexico City by Jorge Olvera Hernández [17] and came back to Chiapas as a more empowered force. They all succeeded in broadening the artistic spectrum of Chiapas, and personally inspired me to become an engraver. I found within engraving a tool with several possibilities for expression, giving me the ability to create images. 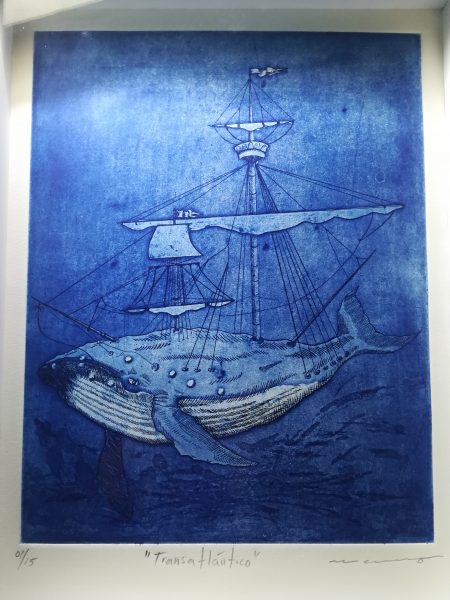 AB: Does the context of Chiapan history and tradition influence your work?

AP: Yes, it’s a direct influence. I grew up in a small town called Sabanilla, where my grandmother's house had a huge chicken coop and lots of animals. I remember drying out coffee beans from Yajalón [18], (the capital city of a northern region in Chiapas called Tulijá Tseltal Chol [19]). Those memories are still so close to me I can breathe them. They are part of my visual imagination and artistic creation. Living between the capital and the outer communities among the high jungle and near the border state of Tabasco [20] formed my experiences. 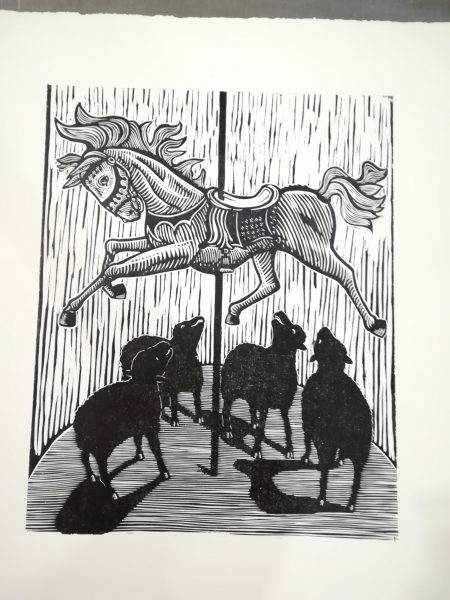 AB: Tell me more about where you grew up and its influence on your work.

AP: I was raised near rivers and its pools, among a natural habitat for animals like deer, badgers, toucans, and turtles, who were sometimes kept as pets by the people. My grandmother Doña Chole told stories and legends about my town and the church with its sacred 17th century art, where as a child I saw these striking images of saints and biblical passages.

One of my works, for example, is a rooster inside a television, contrasting how one starts the day in the city by turning on the TV whereas in the communities it is the rooster that crows to start the day. I hybridize animals with major human inventions, like a whale-ship, as a contrasting duality. But I also return to more personal themes, allegories, or social situations, sometimes by fusing different techniques together or by playing with different images. 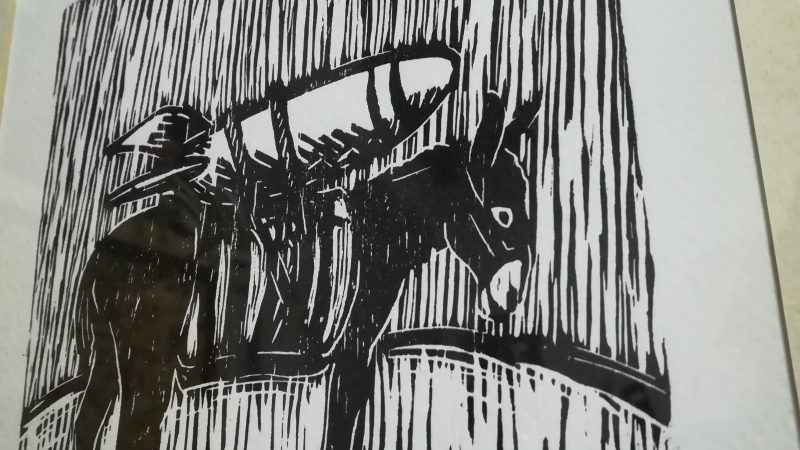 AB: What do you think of the current art scene in Chiapas?

AP: There is a very good art scene here, and more and more offers are coming out of all disciplines – visual, musical, stage performance, etc. I think one of the main reasons why is due to the social detachment the people of Chiapas have felt throughout its history as [Chiapas is] a place that has been marginalized and forgotten by the government and cultural spheres, in both economic and educational aspects.

Nevertheless, thanks to the University of Sciences and Arts of Chiapas [22], renowned visual artists such as Jorge Olvera Hernández, Armando Duvalier, Guillermo Lowe, and engraver Alberto Beltrán have come here to promote education in the arts. They’ve even sent teachers from Chiapas to train in Mexico City. I feel that art here is now regarded as a profession instead of just a trade, and it’s giving way to a more complex and identity-defining art. 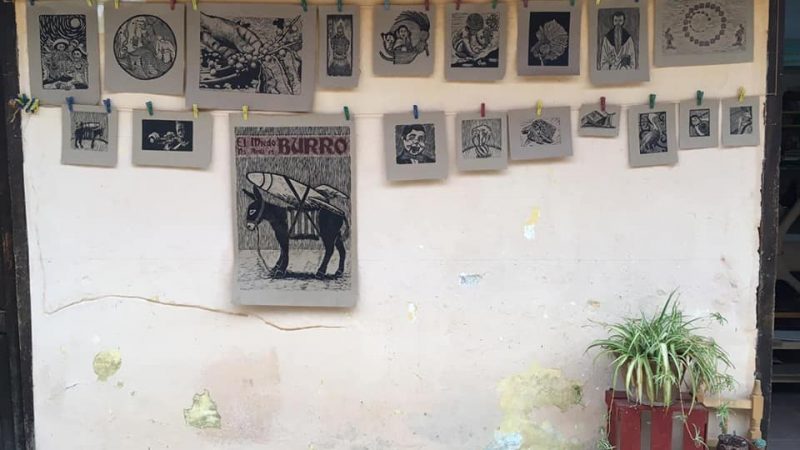 AB: What's the importance of independent workshops like the San Caralampio Studio, which you founded?

AP: A lot! Thanks to the studio, so many people have become more interested in learning, amassing, and being in direct contact with techniques, all of which combined add real value to graphic prints created in our state. I am against some galleries who argue that engraving is devalued by its inherent ability of making multiple reproductions, because they imply that an engraving is not a unique or original piece. From my perspective, the social contribution of the San Caralampio studio promotes quality and presents the public with an opportunity for direct use of the workshop and its tools, so that pieces in a series are known to be multiple originals and are all part of one edition. 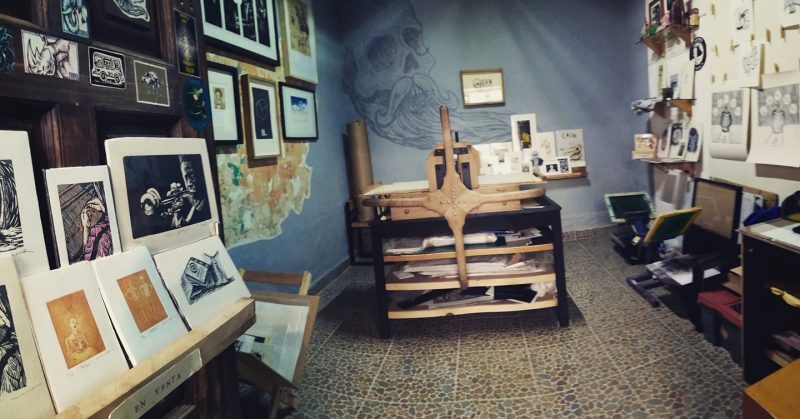 AB: What is the role that art plays in the Mexico of today?

AP: At the time of the post-Mexican revolution, graphic art was a movement that helped provide popular visual and imaginary education directly to people – with a large number of TGP prints, for example. These spread among the working class. Nowadays I compare it to urban art that tries to bring art closer to the public, by giving them logical, digestible, and direct understanding through a graphic image without far-fetched meanings. 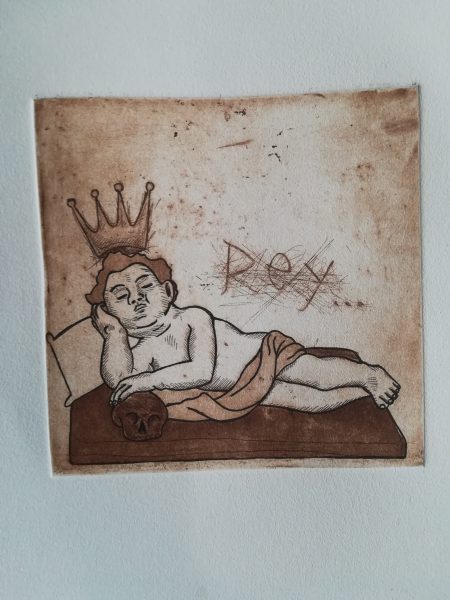