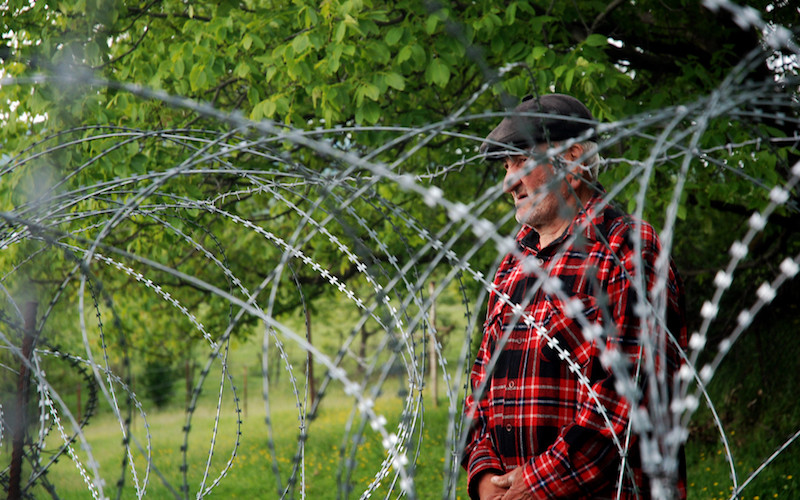 Farmer David Vanishvili stands behind a razor wire fence set up by de facto South Ossetian authorities, 2016. Overnight, he was severed from his land — and from the rest of Georgia. Photo CC BY-NC 2.0: Jelger / Flickr [1].

This article is made possible through a partnership with Transitions [2], a Prague-based publishing and media training organisation

On New Year’s eve, the Georgian magazine Indigo published a letter [3] addressed to the Georgian prime minister sent from Akhalgori, a town in the de facto state of South Ossetia, a Russian-occupied territory in Georgia. Its author was the journalist and activist Tamar Mearakishvili, who has been denied the right to leave South Ossetia for over two years because of her activism. Since early September 2019, Mearakishvili's neighbours have shared her fate; that month, the main crossing point into Georgian government-controlled territory was closed, stranding the 1,500 residents of Akhalgori and the surrounding district in the breakaway state.

“Akhalgori's inhabitants are draining away, and you are among those to be blamed,” Mearakishvili pithily put it to Prime Minister Georgi Gakharia. She said that while vulnerable people struggled to survive, politicians did nothing for them. In Georgia, the public is already discussing the humanitarian crisis in Akhalgori.

In recent years, the boundaries between the two breakaway states of Abkhazia and South Ossetia and territory controlled by the Georgian government have hardened. Local people wake up to find their land behind barbed wire, under the control of the occupying Russian military. Sometimes they are detained and accused to great surprise of “illegal border crossing.” Data which we have collected about these cases demonstrates the human costs of “borderisation,” which makes victims of ordinary people on both sides of the divide.

But first, let's look at the context behind this adversity. How did we come to this point?

Story of a schism

Georgia has two breakaway territories: Abkhazia and South Ossetia, the latter also known as the Tskhinvali region. In the chaos following the disintegration of the Soviet Union during the early 1990s, Georgia first fought a war against separatists in the Tskhinvali region, which was at that time an autonomous oblast (a lower-level administrative entity in the Soviet Union), and then with Abkhazia, which was an autonomous republic. Both these territories have remained outside Tbilisi's control ever since. Although the government had lost control of these territories, local people still had opportunities to interact with each other, trading and travelling across the boundaries. But all that changed after the Russo-Georgian War of 2008, when Moscow recognised the independence of these two de facto states. What had once been “softer” administrative boundaries turned into “hard” borders, with more patrols, more checkpoints, more Russian soldiers and border guards deployed, and harsher policies put in place to regulate “border” crossings.

Read more: Fear and uncertainty: the life of Georgians in Gali [4]

After the 2008 war, Georgia lost control over even more territories in the eastern part of the Tskhinvali region, including Akhalgori. But unlike other towns and villages under the breakaway authorities, which thousands of ethnic Georgians fled during the 1990s, Georgians returned to their homes in Tskhinvali and retained their Georgian citizenship. Since then, the population of the district has been subjected to various political manipulations from the de facto South Ossetian authorities. For example, they are routinely denied permission to cross the “border” into Georgian government-controlled territory during large public holidays. The current crisis [5] is not the first, but it is by far one of the worst.

According to Tamar Mearakishvili, elderly people who survive mostly on financial assistance from the Georgian government cannot receive their pensions [6]. The de facto government has therefore made an exception for them, and sometimes opens the crossing point for them for a five-day period; enough time for the elderly to receive pensions and return to Akhalgori. However, the situation is very concerning for people with serious health issues, as medical services are drastically worse in Tskhinvali than in Georgian government controlled territory. They are almost nonexistent in Akhalgori. Mearakishvili says that ten people died so far as a result of the closed border. The emotional and social consequences must also be taken into account; family members, who left Akhalgori before the closure of the crossing point have now been separated from each other for months. Tamar herself has not seen her daughter since last September.

As the crisis intensifies, more people in Akhalgori have started to speak out against their rulers in Tskhinvali. However, the de facto authorities’ answer has been to to press the Georgian government to demolish a recently erected police post near the boundary with South Ossetia. Accordingly, some analysts believe that the de facto government is attempting to use the ethnic Georgian minority under its rule as a bargaining chip in relations with Tbilisi. This calculation may play an important role in “borderisation.”

After the 2008 war, the South Ossetian de facto authorities and their Russian patrons began to demarcate South Ossetia's self-declared borders. The problem is that they were using different versions of old Soviet-era maps of the boundaries of the former autonomous oblast. This makes the demarcation process high unpredictable for locals living near the border. The new “border” might go through the farmlands, orchards, and pasture local residents use to graze their cattle, or the forests where they collect firewood. Most tragically of all, it can even go through their homes. Cases have even been reported of families dismantling their houses to rebuild them on the Georgian-controlled side of the line. 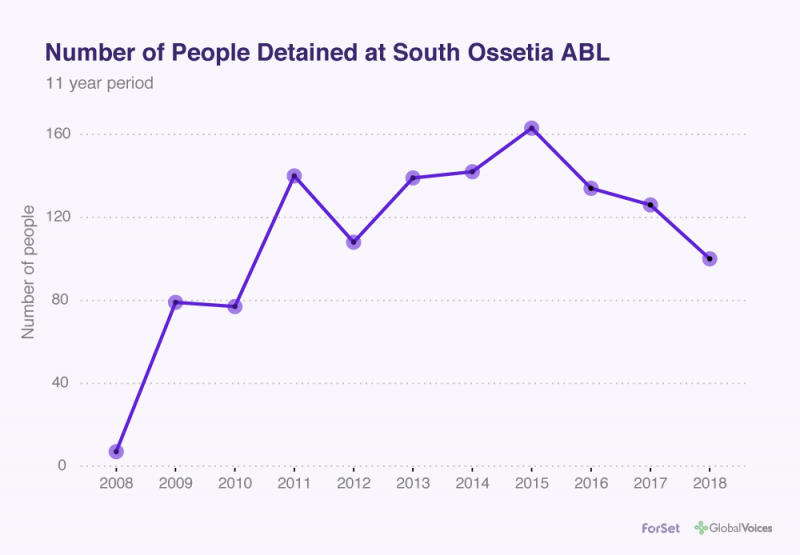 Nor are the “borders” always visible. It is easy for people to cross this invisible “border,” as it has no discernible geographic features. Locals can easily get arrested by patrolling Russian border guards. In its recent report [7] about the circumstances of people living near the Administrative Boundary Line (ABL), as the Georgian government calls it, Amnesty International gives numbers for those detained from 2008 to 2018 for “illegal crossings.” These numbers were provided by the government of Georgia and only represent people who crossed the border from Georgian government controlled territory into South Ossetia.

What is less widely reported is that crossings do occur in the other direction, although South Ossetians crossing into Georgian government controlled territory are frequently caught by Russian or South Ossetian border guards before they reach the other side. According to Amnesty International, the South Ossetian security services, still known by the acronym KGB, published statistics for detentions of these irregular crossings for 2016. These data include people arrested when crossing from both sides and show even higher numbers, amounting to 549 people. Amnesty International's report suggests that these people are South Ossetians who cross into Georgia, not always deliberately, to access agricultural land and to keep contact with ethnic Georgian villagers living on the other side.

Data from Amnesty International's 2019 report on borderisation in Georgia, based on 2016 data from the South Ossetian de facto authorities. Photo (c): ForSet / GlobalVoices. Used with permission.

All these data show that Georgians and South Ossetians suffer equally from borderisation, a fact which is often eluded by Georgian narratives about the conflict.

The boundary between Abkhazia and Georgian government controlled territory may be easier to spot — it mostly follows the course of the Inguri River — local residents face a similar problem. In fact, the number of detentions of people living in or adjacent to Abkhazia is even higher; it reached almost 400 in 2013. These numbers have increased noticeably since the 2008 war, and it is anybody's guess how locals will respond to the closure of multiple official crossing points into government-controlled territory since 2016. Most of those detained are ethnic Georgians from the Gali region of southern Abkhazia, where they form the majority of the population and maintain social ties across the divide.

What is clear is that the mobility restrictions of recent years have taken a toll on local communities [8]. Many local people had social ties across the boundary, and traded with these friends and acquaintances. The hardening of the border was bad enough — those possibilities largely ended. But the ongoing borderisation threatens what little local residents have: their land. Their land is often their sole source of income.

As most of this land is privately owned, the Georgian government does not always compensate owners for their loss of access to it. Amnesty International reports that local people had higher incomes before they were dispossessed of their lands, regardless of whatever meagre financial assistance they receive from the Georgian government.

The price of freedom

Last but not least, there is one further indicator of the financial and social cost of borderisation: the fines which these unfortunate people must pay to be released from detention. Those detained by the de facto authorities in South Ossetia must pay on average 2,000 Russian rubles (US$30), and it is not known whether the de facto authorities in Tskhinvali specify a larger amount for repeated violations.

For villagers living off the land and trading their produce in markets, these can be extraordinary large financial burdens.

If the breakaway authorities’ reported numbers of detainees is accurate, this means that over the past 11 years, ordinary people have had to pay immense sums of money to escape imprisonment. Citing data from the European Monitoring Mission to Georgia (EUMM), Amnesty International writes that between 2008 and 2018, there were 1,871 detentions of people crossing from Georgian controlled territory into Abkhazia. Assuming that each of these was a first-time violation, and that detainees paid the full $230 for their release, this potentially means that $430,330 could have been paid into the de facto government's coffers. These data also suggest that 1,215 people crossed from Georgian controlled territory into de facto South Ossetia. Assuming that they each paid the average $30, this means that the de facto South Ossetian authorities received $36,450 in fines over that ten year period.

These figures are in all likelihood a lot larger, as they do not include those who are detained and fined by the de facto authorities upon unsuccessfully trying to cross into Georgian territory. This is complicated by the fact that in South Ossetia, detainees rarely go to court, and must usually pay the fine upfront to law enforcement agencies. In any case officially recorded sums may not tally with amounts actually paid due to the likelihood of bribery. Furthermore, in December 2018, the head of South Ossetia's de facto Committee for State Security Vladimir Khubayev stated [9] that people detained at the “border” paid 1,004,000 Rubles (or $12,800 at current rates) for 2018 alone.

Khubayev's words suggest that our calculations are probably the tip of the iceberg.

At the start of 2020, Abkhazia and South Ossetia continue to assert their unrecognised independence with military and political support from Russia. Despite the isolationist policy pursued by Tbilisi towards the two breakaway regions, Georgia is nowhere nearer to a final resolution of these conflicts.

As a result, ordinary people are still kept in insecurity, confusion and fearing the worst thing of all: another war.