Azerbaijan signals a lockdown and a crackdown in fight against coronavirus 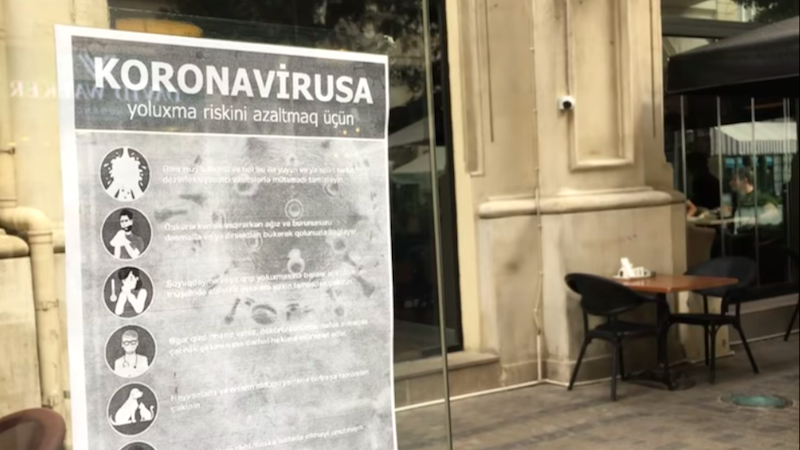 As usual, Azerbaijanis were looking forward to the Nowruz festival, which is celebrated on March 20-21. But this year was different; the streets are silent and the celebrations have been cancelled. Citizens over 65 years are banned from leaving their homes. The authorities have postponed all public events, including weddings, until further notice. Schools are closed until April 20. City streets have become eerily empty.

The coronavirus pandemic has spread to the South Caucasus; at the time of writing, according to the Johns Hopkins University map, there are 72 confirmed cases of the virus in Azerbaijan. Although Azerbaijan confirmed its first case on February 28, that of a Russian citizen who had travelled to Azerbaijan from Iran, there were suggestions of possible cases in the country several days before. Belarus also reported its first case that day: an Iranian student who had travelled to Belarus from Azerbaijan on February 22 was diagnosed with the virus. On February 27, western neighbour Georgia confirmed that a Georgian citizen had been infected by the virus after travelling through Azerbaijan from Iran several days before (Azerbaijani customs officials claimed that the visitor had not shown any symptoms when crossing the border.)

Most of these cases are connected with travel to Iran, Azerbaijan's southern neighbour which has been badly hit by the pandemic. Iran, which faces one of the biggest outbreaks outside China, reported its first cases on February 19 — yet it took Azerbaijan ten days to close its borders with Iran, the last country to do so. That delay has already prompted fierce criticism of the government.

The authorities attempted to quarantine arrivals from Iran fairly early on, but scandals arose about the conditions. On February 27, a group of patients shared videos on social media of the hospital in which they were confined after crossing over from Iran. Their rooms lacked bedsheets, soap, and water. Shortly afterwards, the head of the hospital was dismissed. The following day, more videos appeared online attesting to the poor state of central hospitals in the Astara and Jalabad regions, where people who had arrived from Iran were being held in quarantine. When a group of patients attempted to leave, the hospital was surrounded by special forces police while a state medical spokesperson told Azadliq Radio, the Azerbaijan service of RFE/RL, that the conditions inside were fine and that the patients were simply acting up. On February 29, Azerbaijan finally closed its border with Iran.

Nevertheless, cases continued to rise. On March 5, one German and two Azerbaijani citizens were diagnosed with the coronavirus after returning from Iran; 276 Azerbaijani citizens evacuated from Iran were placed under quarantine. Baku closed its borders with Georgia and Russia on March 13 and 16. The country mourned its first death on March 12: an Azerbaijani man with an autoimmune disease had died while seeking medical treatment for the coronavirus in Iran.

Making the most of a lockdown

Like its neighbours, Azerbaijan is now under lockdown. And the restrictions go much further than bans on celebrating Nowruz. A special headquarters at the Council of Ministers is tasked with punishing those who spread disinformation and warning those who impede the work of medical services. On March 17, municipalities started to reduce public transportation and put restrictions on intercity travel.

That same day, the National Assembly, Azerbaijan's parliament, passed legislation tightening the punishments for violating the emergency regime. Amendments to the criminal code now provide for up to three years’ imprisonment or a fine of 2,500-5,000 Manat (US$1,500-3,000) for violating the epidemic rules or assisting the spread of the disease. Amendments to the administrative code now mean that regular citizens in violation of basic rules can be fined 100-200 Manat ($60-120), while officials face fines of 1,500-2,000 Manat ($900-1200). New amendments to the law on information also tighten the restrictions on “false information which can harm the life or health of citizens.”

In many of these measures, Azerbaijan's response is not so different from other states. For example, in her nationwide televised address on March 18, German Chancellor Angela Merkel said that this pandemic, was the greatest challenge since World War II. She called on Germans to recognise the gravity of the situation and do their part to help to slow down the spread of the virus.

But 3,700 kilometres away in Baku, the tone of the Azerbaijani leader's response was rather different.

On March 19, President Ilham Aliyev, addressed the people of Azerbaijan, celebrating the arrival of spring and explaining the reasons for the cancellation of public events. Then, he switched to a different message:

[…] We see open provocations. Where do these provocations come from? From the very fifth column, from the enemies who are among us, the elements calling themselves opposition, the traitors who receive money from abroad. Their main goal is to destroy Azerbaijan. The worse for Azerbaijan, the better for them. Look at their addresses on social networks, they are full of hatred and provocation. They seem to want riots to happen. They want turmoil. They want panic. And then they claim that they care about the Azerbaijani people. They are our enemies, and we must openly state this. It is not known what this disease will lead to. Therefore, during the existence of the disease, the rules of completely new relationships will apply. Let everyone know this. It is possible that a state of emergency may be declared at some point. In this case, the isolation of representatives of the fifth column will become a historical necessity […] But we cannot allow the anti-Azerbaijani forces, the fifth column and national traitors to take advantage of this situation to commit various provocations. Let everyone know it.

This address was not too different from the speech which president Aliyev delivered on March 14, at the first session of the newly elected National Assembly:

It is no secret that the public and political situation in Azerbaijan is currently very stable. There is not a single factor in our country that can pose a threat to public and political stability. This is why the anti-Azerbaijani forces are trying to create these factors outside our country. They no longer rely on the group that calls itself the opposition here and supposedly continues to operate in an absolutely shameful position. And there is no more confidence for them. So work is underway to create a new fifth column because the current fifth column does not justify the confidence of its owners […] Therefore, a new fifth column is being sought. In this regard, I want to strictly warn all political forces: this is a path of betrayal. Whoever follows this path will commit treason against the people and state. Therefore, all our internal problems should be resolved within Azerbaijan. We should not export our domestic problems or political discord. First of all, it is absolutely pointless because there is no force in the world today that can impose any solution on us or dictate anything to us. There is no such force out there and as long as I am president, there won’t be any. Therefore, it is absolutely pointless. Attempts to exert pressure on Azerbaijan or threaten us with sanctions are all completely meaningless. This is a crime against the state, not against the government, and let no-one forget that.

These speeches intrigued observers. Who was “everyone” who needs to know? More importantly: who was “the fifth column”? The originated during the Spanish Civil War, and refers to a group of people whose intent is to undermine a larger group or a nation from within by any means at their disposal.

This term is traditionally used in Azerbaijan by government representatives when referring to their political opponents. In December 2014, the president's then Chief of Staff Ramiz Mehdiyev published a sixty‑page manifesto entitled “The World Order of Double Standards and Modern Azerbaijan,” claiming that Azerbaijan’s human rights defenders were a “fifth column” of the United States. In 2015, Deputy Head of the Presidential Administration Novruz Mamedov reiterated a theory that the National Endowment for Democracy was the primary actor in supporting the “fifth column” in Azerbaijan.

Both men were eventually dismissed from their posts, but this worldview persists.

Mehdiyev's expose came at the time of an unprecedented crackdown against Azerbaijani civil society activists and the shutdown of Azadliq Radio. Scores of journalists, human rights defenders, and political activists were arrested on questionable drug possession charges and sentenced to lengthy jail terms. There are now concerns among opposition activists that a new crackdown on Azerbaijan's opposition is imminent. With the new emergency powers to contain the coronavirus pandemic, fear activists, president Aliyev's government may have a perfect opportunity to tighten control even further.

There have been some indications of this. On March 8, the opposition group D18 were made to vacate their offices due to a supposed coronavirus threat. On March 11 Fuad Ismayilov, an activist who was detained while spraypainting protest slogans near the offices of Azerbaijan's Central Electoral Commission, was refused permission to speak with his lawyer. The authorities cited the coronavirus as the reason. On March 23, Tofiq Yagublu, a leading member of the opposition Musavat Party, was sentenced to prison. After the trial, Yagublu's daughter noted that “Ilham Aliyev is filling up prisons” while governments elsewhere released inmates due to the coronavirus threat.

As Arif Mammadov, a former Azerbaijani diplomat, wrote on Facebook:

Meanwhile, Azerbaijanis are asking whether their healthcare system is ready to cope for a full-blown pandemic. In a vox pop on January 28, Azerbaijani nationals were asked by Azadliq Radio whether the country's hospitals were really ready. One Baku resident believed that the virus would not make it to Azerbaijan at all, while many others expressed doubt that the authorities would cope.

Unfortunately, like the rest of the world, Azerbaijan will soon get a chance to find out.