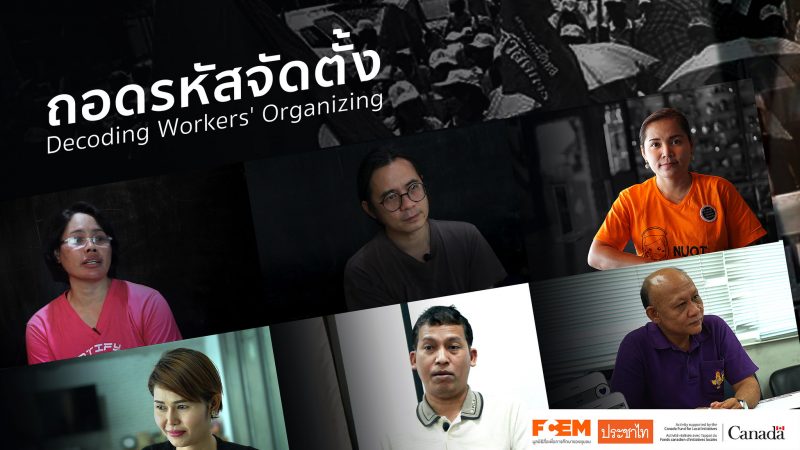 Interview with several workers in Thailand. Photo by Prachatai

In a an economic system that favors the owners of capital, workers need to consolidate their ability to protect their rights, and negotiate over fair benefits with the management. In order to map the current situation of labour rights in Thailand, we interviewed workers from six sectors of the local economy, including domestic work, higher education, health sector, textile industry, sports equipment production, and the banking sector. While there are both similarities and differences in terms of working conditions, it appears clearly that all of the workers require a labor organization in order to promote better living conditions, as well as a level of freedom based on universal democratic principles.

These are the workers we interviewed:

Domestic worker. Ms. Malee Sorblec is working in the house of her employer. Domestic work is part of the care sector which is growing in Thailand. However, domestic workers are often treated poorly and denied respect. Their status is lower than factory workers. As a result, they are now organizing a labor group for both Thai and migrant workers to restore their dignity and to be free from abuse. Their main demand is a written employment contract.

University employee. Mr. Pinyapan Potjanalawan is a university lecturer. Although professional lecturers in public universities have competitive salaries, they remain trapped in short-term employment contracts. This situation leads to job insecurity and weaker bargaining power against executives and educational quality assessors. Currently, they do not have a union.

Hospital worker. Ms. Punyisa Watchala-anan is a secretary of the Nurses Union of Thailand. Nurses have seen their status change. They were previously covered under the state bureaucracy that provides comprehensive welfare benefits. After the privatization of several segments of the healthcare system, public hospitals reduced their labor standards and costs, resulting in the poor quality of medical services. This situation has inspired nurses to set a union and demand pay raises, larger benefits, a better working environment and to be promoted in the management system.

Sports equipment maker. Ms. Wilaivan Ritthiron, who previously worked in a popular sporting goods manufacturing company, was unfairly dismissed because she was involved in organizing a union while demanding a pay raise, more benefits, and fair treatment from management. Her group also advocates being safe and free from sexual harassment.

Textile worker. Mr. Sia Jampatong is the president of the Phiphatsamphan Textile Labor Union and of the Textile, Garment and Leather Workers Federation Thailand, an organization known in Thailand for defending labour rights. The union is able to bring issues up from the local level to a national one and thus allow workers to directly participate in state policy making, including the creation of a universal welfare state.

Bank employee. Mr. Withit Sirisuwan is the president of the Siam Commercial Bank Labour Union, and reflects on the impact of changes caused by advanced technology such as digital platforms. The union agrees with the management to adjust and transform original job positions into new ones for the survival of the banking industry. The trade union plays an important role in negotiating policies with management to ensure that advanced production will serve not only customers but workers as well.

Watch the interviews with subtitles here