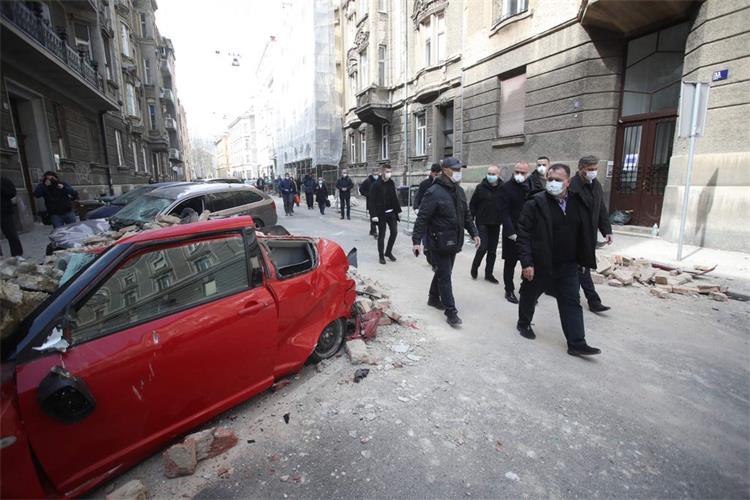 Damage in Zagreb after the March 22, 2020 earthquake. Photo by Government of Republic of Croatia, used with permission.

A series of tremors hit the Croatian capital Zagreb on early Sunday morning on March 22, leaving at least 27 people injured, one critically, and widespread damage to old buildings in the historic center.

The epicenter was registered at seven kilometers north of Zagreb at a 5.3 magnitude on Richter's Scale.

During the tremors, debris from facades, slabs from roof tiles fell on the pavement and flattened cars. Local residents immediately fled their homes in fear of aftershocks.

Rumors that another, stronger quake was imminent stoked some panic in the population. But in the two days after the first quake, no such tremor happened. About 60 small tremors in Zagreb area were registered, with the last one reaching 3.2 degrees on Richter's Scale on the evening of March 23. No additional damage was reported due to these smaller aftershocks by the publication of this story.

The earthquake hit at a very unfortunate moment as authorities just recently imposed drastic measures to contain the COVID-19 outbreak.

Measures include the closure of all non-essential businesses, prohibition of all public gatherings including religious ceremonies, and closing all land borders. Authorities are also requesting people to stay home as much as possible.

“Panic is not our ally at this time,” Croatian Prime Minister Ivo Plenković said at a press conference on Sunday that was streamed by Al Jazeera on Facebook. 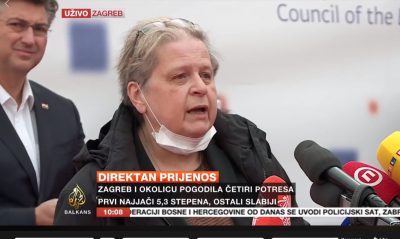 Authorities advised citizens who had exited their homes and were waiting for aftershocks to keep a distance from each other and fight the natural urge to huddle together or congregate in groups.

Speaking after the president at the press conference, Croatia's top seismologist Ines Ivančić said that it's impossible to predict whether there will be another tremor or not. She said the possibility of aftershocks cannot be ruled out, and that they might come within hours, days, or weeks.

These statements confirmed a message by the Seismological Service of the Zagreb University, headed by Ms. Ivančić, who tweeted in the morning:

We can't predict earthquakes, and any information that a stronger quake is imminent is not true! The probability of a stronger tremor exists, but it is extremely small. We can expect further weaker tremors. We have no electricity in our office and we do all we can to provide timely and accurate information for you.

The authorities noted that they will monitor the situation, based on scientific assessment, and issue recommendations on how to proceed. They reinforced warnings against panic, which has proven harmful in recent similar situations in the Balkans region.

Most of the damage was sustained by older buildings, which abound in Zagreb, as the city had largely been spared the wartime and earthquake devastation experienced by other Balkan capitals during the tumultuous 20th century. The last tremor of similar magnitude to hit the city was 140 years ago, the Great Zagreb earthquake of 1880.

At the same press conference on March 22, Zagreb's Mayor Milan Bandić said that 80 percent of the population now lives in buildings made with reinforced concrete, which are considered safe for earthquakes of up to a certain magnitude. He advised citizens living in such buildings to return home and practice self-isolation to prevent the spread of the new coronavirus.

The remaining 20 percent of the citizens who live in buildings or houses built before the 1960s remain at risk. Authorities have dispatched teams of specialists to evaluate whether those residents are safe to return home.

Accommodation and meals for up to 1,500 persons are provided in a student dormitory of Zagreb university, and about 60 citizens whose houses were deemed unsafe spent the night there.

Material damage is considerable. One of the towers of iconic Zagreb Cathedral, built at the end of the 13th century, has suffered damage, as well as much of the city's infrastructure, with parts of the city losing access to electricity, water, and heating.

The city's gasworks asked the citizens to close down their valves in order to minimize the risk of natural gas explosions from punctured pipes.

Some of these older, damaged buildings, house public institutions, including hospitals. Images of evacuated mothers and babies on the street in front of the maternity ward of the Department of Obstetrics and Gynecology went viral in the Balkan internet. The victims were all quickly moved to other hospitals.

Some media initially reported that a 15-year-old had died from his injuries, quoting a health official in charge of the Emergency Medicine Institute, but the director of Zagreb's Children's Hospital, Goran Roić, clarified that the report was inaccurate.

He said that the victim was, in fact, a girl and that she had not died but remained in critical condition. According to her parents, she was hit on the head by a falling object during the earthquake.

The Croatian Army, the Red Cross, and other volunteers were quickly dispatched to aid the population in affected areas, who also suffered from the cold. Europe has experienced a sudden drop in temperature, which brought snowfall to much of the Balkans.

Intervention teams of the Red Cross visit citizens in the center of Zagreb, downtown and neighboring areas, distributing blankets. If you notice someone needing help, please call us, and also don't hesitate to help on the spot yourself.

The government of neighboring Slovenia was also the first to offer assistance, followed by European Union officials.

Slovenian authorities were also quick to announce that the earthquake had not affected the Krško Nuclear Power Plant, located near the border with Croatia, and about 50 kilometers away from Zagreb and the earthquake's epicenter.