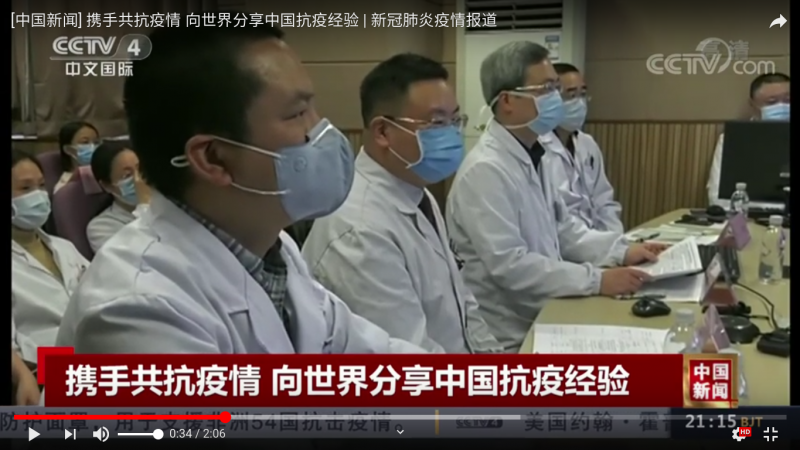 China Central Television reported that Chinese doctors were sharing their experience battling COVID-19 with the world via video conference. Screen capture from CCTV.

The COVID-19 pandemic has subsided in China, with zero domestic cases reported since March 18, and all new cases confirmed as of March 22 reported to be imported. However, classified data seen by the South China Morning Post has indicated that the official announcements of confirmed cases exclude asymptomatic virus carriers who tested positive.

By the end of February, at least 43,000 identified asymptomatic cases had been placed in quarantine. This figure is more than half the 81,689 total confirmed cases reported as of March 23, 2020 and constitutes about one-third of the total number of tested positive cases.

The idea that the Chinese government had excluded asymptomatic cases from the official announcements has been circulating on social media networks such as WeChat for more than two weeks, as many people noticed that the on-the-ground figures of confirmed cases were different from the official figures.

Twitter user @ding_gang posted a number of notices about newly confirmed cases from residential districts in Wuhan and questioned the official figure:

So many newly added cases around Wuhan and the official figure is zero!

Some pointed out that China’s National Health Commission had put asymptomatic cases and confirmed cases into two separate categories in the third edition of its “COVID-19 Control Guidelines” published at the end of January. In fact, the working definition of “confirmed infection” used by Chinese health authorities has changed a number times since January. 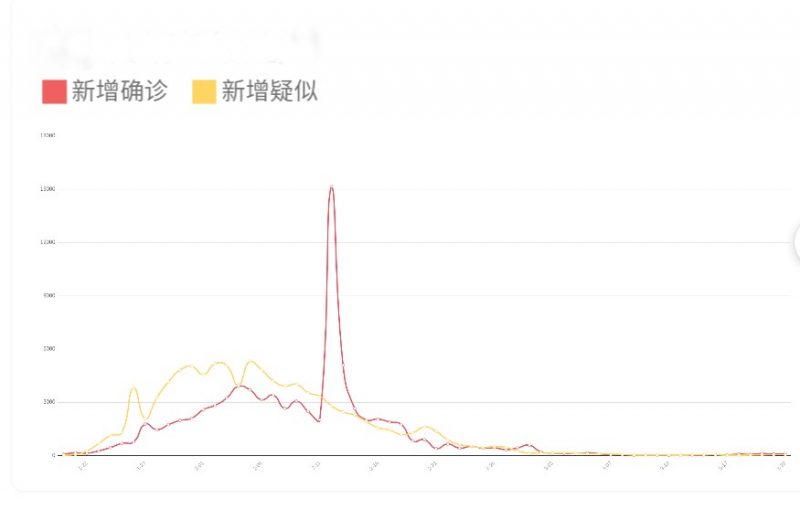 As shown in the outbreak curve above, after the health authorities subtracted the asymptomatic cases from the official figure, the number of confirmed cases peaked at about 4,000 on February 4, and slowly declined to about 2,000 February 11. Then there was a 600 per cent surge as 15,152 confirmed cases emerged February 12  following major leadership changes in Hubei province and the city of Wuhan. Under the new leadership, the definition of “confirmed” was changed from being based on laboratory testing to clinical diagnoses. In reality, there were only 1,820 confirmed laboratory cases, while the remaining 13,332 of the new cases were clinically confirmed. After February 12, the curve of confirmed cases declined as the definition of “confirmed” infection was shifted back to laboratory testing.

Many netizens believed that the goal of the manipulation of the figures was to prepare the country for resuming production in March, as the economic impact of not doing so would be likely to generate greater political instability than the disease. Chinese writer @laodeng89, for example, commented on a Bloomberg analysis of the impact of COVID 19 on China's economy:

In order to defend the economy, the CCP tried all means to repress the number of confirmed cases. If Wuhan had 14 consecutive days of zero infection, the whole country could resume work. But according to Bloomberg’s analysis, the resumption of work in China would not relieve the economic pressure, as the spread of pandemic across the globe would strike China hard as well.

While the CCP claimed that Wuhan's rates of pneumonia had declined, foreign trade corporations in 19 provinces had resumed almost 100 percent of their business, and overall, 90 percent of the businesses in the country have resumed work, Caixin reported that the shrinking in demand and contracts from the US and Europe because of the pandemic had taken away work. The situation was more devastating than during the financial tsunami. No contracts, no foreign currency, but the annual importation of oil, food and chips would cost US 400 billion dollars. What would become of China’s economy?

At the same time, the threat of transmission from asymptomatic infections cases is still alive. Although China has kept track of asymptomatic infections, as the country resumes its economic activities some asymptomatic coronavirus carriers may have returned to the workforce and spread the virus to others. At least one study has found that infected people can be highly contagious even if they have mild or no symptoms. In a separate study, it was estimated that the rate of “silent transmission” is about 10 per cent.

Additionally, both Hong Kong and Taiwan are facing a second wave of outbreak. The number of confirmed cases in Hong Kong doubled in 10 days from 150 on March 14 to 317 as of 22 of March. While the majority of the cases are imported, an increasing number could not be traced back to existing cases, indicating that asymptomatic transmission has taken root in the local community.

According to Tencent's daily update on COVID-19, on March 23 there were about 191 confirmed cases across the country (including Hong Kong, Macau and Taiwan), of which 60 were imported. While the page had removed the specific locations of the confirmed cases, the trend indicates that COVID-19 is coming back to China.