COVID-19 diaries from Wuhan: ‘…not only a city being locked down, but also our voices’

"The bell of a historical moment had rang."

People lined up in a pharmacy in Wuhan. (Photo credit: Guo Jing)

Wuhan, China as the epicenter and origin of COVID-19, has been locked down by the Chinese government since January 23, 2020. The city holds 11 million people and during the outbreak, about 6 million people were put under quarantine, and approximately 5 million left the city during a holiday break.

However, Ai Xiaoming, an independent filmmaker and feminist scholar, and feminist activist Guo Jing, have shared their diaries on Matters News. Their diaries vividly reflect the emotions among common people during the sudden lockdown.

China's control over the pandemic has been described as a “victory” or “success” by Chinese authorities and the World Health Organization, but ordinary peoples’ lives under such top-down control and surveillance measures should not be ignored — how people are atomized and reduced into a collective, as Guo Jing described in her diary.

Since December 8, with the index case, Chinese authorities insisted that the epidemic outbreak was under control. By January 20, it admitted to the human-to-human transmission of the virus. Ai and Guo's diaries express how Wuhan residents were kept in the dark and unprepared when the government proclaimed the lockdown of the city.

Global Voices will publish Ai and Guo's diaries from Wuhan in a series. The following words were written in the first week of the lockdown between January 23-28, 2020.

I am a calm person, but I started to feel panic on Jan. 20 when we had more than 100 confirmed cases in Wuhan, and when confirmed cases kept emerging in other cities and provinces. It is obvious that the spread of this infectious disease has been covered up in previous news. The number of people wearing face masks has increased dramatically since that day, and medical masks were sold out. Many are also buying cold remedies.

I have been anxious for several days. Based on the update, most confirmed cases in other places had visited Wuhan before Jan. 15. Wuhan is the city with the largest number of college students in the world, and the university holiday started in mid-Jan. Recently, many people are going home for Chinese New Year, so there must be a lot of people in the train stations. However, the train station in Wuhan has not been monitored carefully. I did not plan to go home in Chinese New Year. It should be safest to stay where I am. This morning, I saw the announcement of city lockdown, and I felt panic. I do not know the implication of such lockdown and how long this lockdown will be, and I do not know what I have to prepare.

My friends asked me to stock some necessities. At first, I did not want to go out, so I made some orders online. However, I was worried that these delivery services will be stopped at any moment. I also wanted to see what happened outside, so I went out. Most people outside were middle-aged or above, and there were few young people. When I went to the supermarket nearby, I saw many people lined up at the cash registers. There was not much survival food left, such as rice and noodles. I was shocked, and I quickly grabbed some. A man bought a lot of salt. Someone asked him what for with that amount of salt. He said just in case the lockdown lasts for one year.

After I bought some food, I was still in a shock. There are fewer and fewer cars and pedestrians on streets. A city is suddenly shut down. When will it be alive again?

This is the Chinese New Year's Eve. Wuhan has never been so quiet. Today should be the day that families can get together. Numerous family gathering dinners have been cancelled. I saw the photos of the city locked down yesterday: The military personnel and the police stood on one side, and the disappointing travelers stood on another side. Outside the camera, someone said in Wuhan’s accent, “Look at it, the Hankou station was locked down at the first time in hundreds of years.” Something in my heart was squeezed suddenly, as if the bell of a historical moment had rang.

I live in the Jiangxia district, and it is around 40 kilometers away from the Hankou station…I could imagine the anxiety of those travelers who are forbidden to go home before Chinese New Year. What should they do? The government locked down the city overnight. Where can they find a place to stay? What can they do in this Chinese New Year?

I think those powerful people have “good-news syndrome”: whatever happens, they only want to hear good news, and they do not care whether those good news are true or fake. If there is none, they will make one. If you say this is not true, they will fight to the death for it.

You know what I am talking about. That little bat, that bat soup. The photos and videos of it are circulated widely. However, the elephant in the room is still walking around leisurely. That is the evil that no one dares to point at.

Soon after the lockdown in Wuhan, a video went viral on Chinese social media. A large number of media outlets in China suggested that Chinese bat eaters had caused the problem. However, bat was not a cuisine in Wuhan at all. Later, it was revealed that the video was filmed in a Pacific Island. 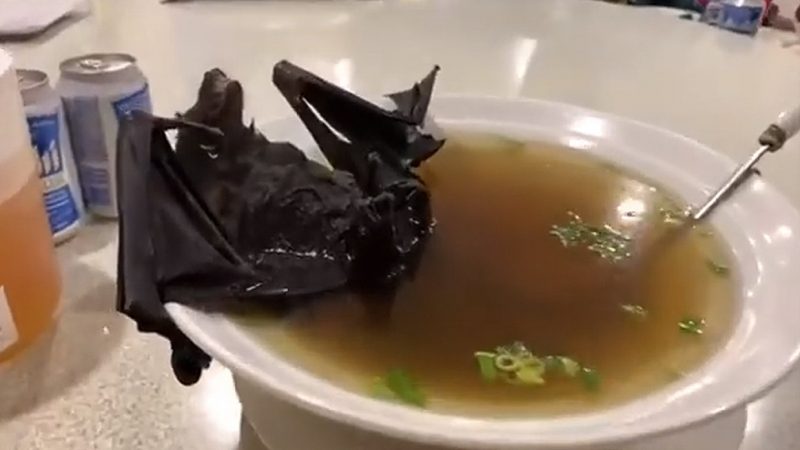 Viral bat soup photo captured from a viral video suggesting that Chinese bat eaters should be blamed for the epidemic.

The world is stunningly quiet.
I live alone. I only feel that someone else exists in the world with me when I hear some sounds from people in the same building.

I have a lot of time thinking about how to survive. I do not have any resource or social network in the organized system. If I wer sick, I would [be] like those who could not receive medical treatment. Therefore, one of my goals is to stay away from any disease. I must keep training my body.

The government has not announced exactly how long this lockdown will be, and they did not tell us how this city will keep working after the lockdown. Some people said the lockdown might last until May, based on the current number of confirmed cases.

In this war, most of us can only rely on ourselves. We do not have any protection from the system. I am relatively young. It is difficult to imagine how those disadvantageous people, such as those senior people living alone by themselves and those with disabilities, could survive this war.

When I was eating, I had a group video chat with some friends. We could not escape from the topic of Wuhan Pneumonia. In fact, people all over China are more or less influenced by it.

Suspected infection might be the most serious psychological stress that I have now. I was shocked when I sneezed and saw some blood in the snot this morning. After I threw away that tissue paper, I could not stop thinking the possibility of me getting sick.

Here is not only a city being locked down, but also our voices.

I could not upload the photos when I tried to upload my diary to Weibo on Day 1. I could not submit the text, either. I need to make the text into photos to submit them. Yesterday, I could not send those photos converted from the text to my friends’ circle. After I published on Weibo, it is obvious that the amount of viewing has been restricted. My article was forwarded by almost 5,000 people in Weibo on Jan 24, but my other article was forwarded by only 45 people on Weibo yesterday. At some moment, I thought maybe I did not write it well. Today is not the first day that we have internet monitoring and restriction, but these measures become much crueler than ever at this moment. A lot of people are restricted to stay at home, and we need internet to gather information and keep the connection with our family and our friends. Otherwise, we will be an isolated island, cut off from the world.

Somewhere in Wuhan during the lockdown. Photo credit: Guo Jing.

The whole city has been shrouded by the heavy atmosphere. As one member in the city, I cannot help but becoming more and more careful. I do not dare to talk to others. The lockdown turns our lives into the atomic status, losing connection with others. However, people are not willing to yield to the current situation. Yesterday at around 8 p.m., there were people yelling outside my window. Many people opened their windows and shouted, “Keep walking, Wuhan” This action is a kind of self-empowerment. People try to find connection with others, and people try to find power by shouting together.

Since January 27, Wuhan residents have been chanting “Wuhan add oil” at around 8 p.m. A similar practice happened during last year's anti-extradition protests in Hong Kong, when protest supporters yelled out “Hong Kong add oil” each night at 10 p.m.

Below is a South China Morning Post's video about Wuhan's residents’ “yelling out” at night: