Injunction grants Guyana's election commission the freedom to declare a winner — but will it? 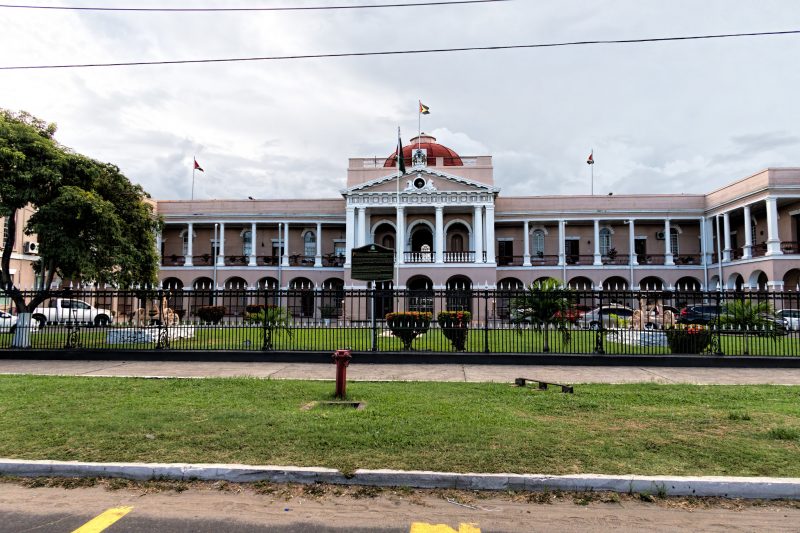 Guyana's neoclassical parliament building, located in the capital, Georgetown, was completed in 1834. Photo by Dan Lundberg on Flickr, CC BY-SA 2.0.

As the rest of the world wrestles with the COVID-19 pandemic, Guyana is also wrestling with an electoral crisis.

Ever since the country's general elections on March 2, 2020, there has been an ongoing battle to determine which of the two leading parties is the victor: the governing A Partnership for National Unity/Alliance for Change (APNU+AFC), or the opposition People's Progressive Party (PPP).

Following a legal challenge by the PPP and the High Court's ruling that the results from the key electoral district of Region 4 — the main point of contention — were null and void, President David Granger and Opposition Leader Bharrat Jagdeo jointly met with a contingent of Caribbean Community (CARICOM) leaders on March 11 and agreed to uphold the law and engage in a verification process for the Region 4 ballots.

This began on March 13, but came to an abrupt halt since the results continued to be read from a contentious spreadsheet, in contravention of the court ruling. That same day, international observer missions pulled out of Guyana, citing lack of transparency in the recount process.

On March 14, certain members of the APNU+AFC held a press conference — with President Granger noticeably absent — during which the party's campaign manager Joseph Harmon said he was “satisfied with the decision which was made by the Returning Officer and countersigned by the agent as being the final declaration of the [original] count of the votes in Region 4.”

Harmon also accused the opposition of engaging in “delaying tactics.”

Not everyone in the party is as confident, however, most notably Dominic Gaskin, a former government minister and the president's son-in-law, who was “not sufficiently convinced” that the Region 4 results “accurately reflect the results recorded on the various statements of poll collected from the 879 polling stations.” The election verification process in Guyana is still predominantly a manual one.

When asked at the press conference about Gaskin's statements, Minister of Natural Resources Raphael Trotman said, “I can say that the overwhelming majority of the AFC membership and leadership does not share [his] view.”

Guyanese columnist Freddie Kissoon has since put forward the theory that there is a power struggle between two factions in the governing coalition, one siding with with President Granger and the other with Minister Trotman. “What is actually taking place in Guyana right now,” Kissoon wrote, “is a putsch.”

Three days after the press conference, on March 17, Ulita Grace Moore, who ran as a candidate for the governing coalition in Guyana's 2018 local government elections, successfully filed an ex-parte injunction to block the Guyana Elections Commission (GECOM) from acting on the recount agreement made with CARICOM. At this point the recount had not yet begun. The ruling essentially means that GECOM has the green light to declare the election result in the government's favour.

Moore's name is also on the Region 4 candidate list for the regional elections, but the judgement did not state why this was not considered a conflict of interest. 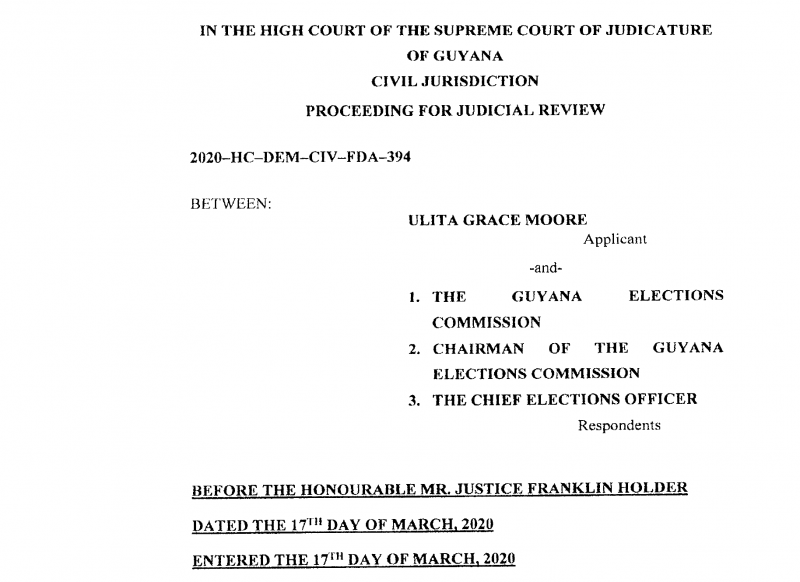 A screenshot of the injunction order brought by Ulita Grace Moore on behalf of the government.

Though GECOM has not yet acted on the new ruling, it claims that no matter how well-intentioned, the agreement with CARICOM cannot override the law. Since the interim injunction was served ex-parte, meaning the other side was not present, arguments to the contrary are yet to be heard.

The judge will hear the arguments for both sides on March 20 at 9:00 a.m. local time.

Barbados Prime Minister and CARICOM Chair Mia Mottley withdrew her team, saying, “It is clear that there are forces that do not want to see the votes recounted for whatever reason. Any government which is sworn in without a credible and fully transparent vote count process would lack legitimacy.”

Former Commonwealth Secretary-General Sir Shridath Ramphal called it “utterly regrettable that […] the invited CARICOM team to oversee the recount of the votes has had to withdraw.”

The PPP, meanwhile, has filed contempt charges against GECOM officials.

Citizens are watching this scenario unfold with a mix of frustration and grave concern.

On social media, an open letter to the country's president penned by retired Major General Joseph Singh was making the rounds. In it, Singh, the former head of the Guyana Defence Force — and former chairman of GECOM — suggested that President Granger was “being manipulated by persons who do not have the best interests of our beloved Guyana at heart”:

[These people] are prepared to hold you hostage to their own evil intentions and to manipulate you and the Constitution of this country to achieve their own personal and collective goals, unbothered by the catastrophic impact their actions to date are having on national morale, on the fears and anxieties of all Guyanese, whether or not they are supporters of your political party. […]

What matters to me, and I am sure to all right thinking Guyanese, as well as the regional and international community, is that the electoral process reflects the will of the people.

Noting that “long-suffering Guyanese” are “hurting,” “embarrassed” and “angry,” Singh said that an independent recount would allow “whichever political party is finally declared to have the majority votes, [to] be acknowledged as legitimate and be allowed to form the government.”

A March 18 statement from the Commonwealth Observer Group to Guyana echoed this position:

It is the clear and considered view of the Group that the tabulation processes conducted by the Returning Officer for Region 4, Mr. Clairmont Mingo, were not credible, transparent and inclusive.

‘The rig is transparent’

Speaking with Global Voices via WhatsApp, engineer Marcel Gaskin (Dominic Gaskin's brother), who in March 2019 filed criminal charges against GECOM over its failure to call elections in the time frame within which they were constitutionally due after a December 2018 no-confidence vote, said, “The rig is so transparent it's an insult to our intelligence.”

When asked if the government is concerned about social unrest and violence, Gaskin replied:

They don't seem worried about this. They are peddling so much misinformation to their supporters. If they succeed [in being declared the winner] the only way they can rule is by outright repression. I believe the main reason GECOM hasn't yet declared an election result is because of the pressure from international observers and threats of sanctions from the international community.

As Guyana sits on the threshold of an economic boom with its newly discovered oil and gas reserves, any such sanctions would certainly have a bearing on the country's reputation and ability to participate in key international organisations like the Commonwealth and the OAS.

Individuals who seek to benefit from electoral fraud and form illegitimate governments/regimes will be subject to a variety of serious consequences from the United States.

However, one senior APNU+AFC figure has responded to this threat by taking to social media to encourage Guyanese to lobby US legislators and politicians, including Democratic presidential hopeful Joe Biden, and journalists such as MSNBC's Rachel Maddow.

Meanwhile, the country's Private Sector Commission (PSC) has called on Guyana's Police Commissioner to ensure the professional conduct of his officers, amidst concerns that the police are being used as APNU+AFC election enforcers.