As the country registers its first death, more Russians are staying indoors 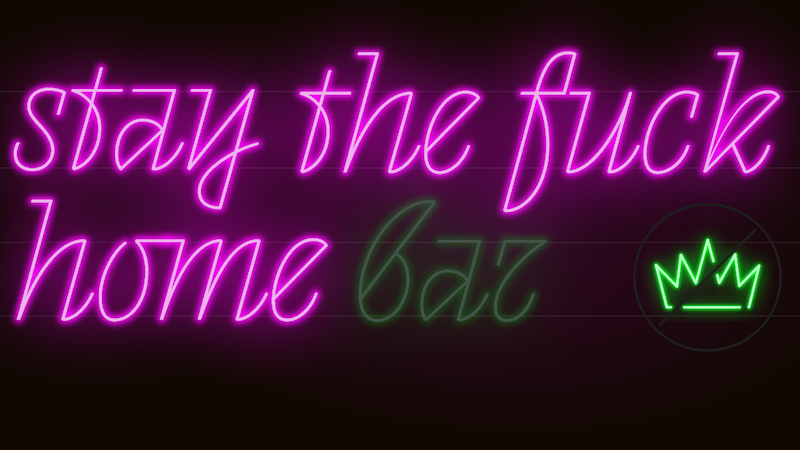 Screenshot of the landing page of the Stay The Fuck Home Bar, created by the Shishki Collective.

A resourceful Russian firm has launched a bar to allow lonely extroverts some relief from self-isolation — online.

Increasing numbers of Russians are opting for self-isolation after confirmed coronavirus cases rise steeply. At the time of writing, they stand at nearly 200. Today, the Russian authorities confirmed the country's first death: that of a 79-year-old woman with underlying health issues. Healthcare staff are going online to express their concerns about the preparedness of hospitals across the country, where wards are filling up with pneumonia cases — a symptom of COVID-19.

The Russian government has taken strict measures to prevent contagion. As of March 7, all travellers from affected countries have had to self-quarantine for 14 days upon arrival. Punishments for breaking this isolation could include lengthy prison terms; to enforce it, affected people in Moscow are now subject to the city's controversial facial recognition camera system. This week, the country closed all its borders to foreign citizens until May.

Just like almost everybody else, Russians are panic-buying in supermarkets and preparing for a long stretch behind closed doors. They're going online and sharing their tips and experiences in videoblogs and Facebook posts under the hashtag #яостаюсьдома (I stay at home). In short, they're following the example of Stay the Fuck Home, an international campaign which encourages people of all ages to remain indoors in a desperate bid to “flatten the curve.” By reducing social contact, the risk of contagion decreases, thereby avoiding a spike in hospitalisations and a collapse of healthcare systems.

The Stay The Fuck Home Bar went online on March 14. It is the creation of the Shishki Collective, a St Petersburg based startup, and its goal is, “with borders closed and hearts open,” to help self-isolating people around the world connect with others over a beer or glass of wine. Users can access one of the 24 hour chatrooms hosted on the Whereby videoconferencing platform using only their internet browser, activating their webcam if they choose. The four “bars,” each of which can each host twelve people, have a distinct theme: for example, one brings together lovers of design and art, and another allows users to practice their English.

According to the Calvert Journal, over 30,000 users visited the website in the 24 hours since its launch. Creative director Mikhail Shishkin, told online magazine The Village that the idea for the bar arose during the closure of the Shishki Collective's offices, thanks to which employees searched for new ways to stay connected socially:

It's all set up very simply. You pour a beer, go online, and some guys are sitting there. Somebody from Los Angeles, somebody from Tallinn, from Kharkiv, from Moscow. For example, a guy from Spain could show what beautiful sunny weather he can see from the window, although there's nobody on the street. So it's real-time communication, everybody can get to know each other and discuss different topics.

Shishkin hopes that, if and when real bars close in coming weeks, their clientele can nonetheless continue to socialise in dedicated online chatrooms. He states that he and his colleagues are helping several St Petersburg establishments open their own “digital branches” on the website.

RuNet users seem enamoured with the project. One can only hope that their enthusiasm online reflects an equally strong commitment to staying home in real life. When this author logged on to the bar earlier today, he found the chatrooms nearly full, though signs of digital regulars building friendships and connections across borders and perhaps political divides.

“I'm so fucking sick of all this,” sighed Anton, a forty-something sitting at his kitchen table. The other three men nodded in pained agreement. “Oh, somebody from Kyiv has joined us,” they smiled.