“I felt like I was held hostage for food and shelter" 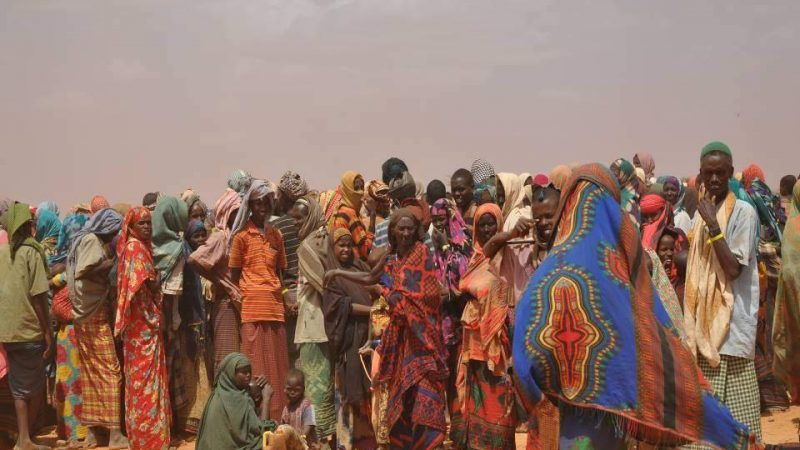 People displaced by drought in Somalia arrive at the Dolo Ado camp in neighboring Ethiopia and queue to be registered by the aid agencies running the camp. Photo by the Department for International Development in the United Kingdom, via Flickr, CC.BY.2.0.

Editor's note: This piece was written by Tesfa-Alem Tekle, a  journalist and researcher based in Ethiopia. It is part of our series on digital ID systems, produced in partnership with The Engine Room. Visit the Digital ID microsite to read a full research report on this global trend, and case studies on five countries that have deployed digital ID systems, including Ethiopia.

The new program, known as the Biometric Identity Management System (BIMS), was later introduced to dozens of countries — including Ethiopia — in 2017.

Biometric registration enables refugees to secure a digital ID that gives them access to a range of aid services and rights. Although digital IDs have potential benefits in terms of boosting humanitarian response, their use has raised concerns about privacy and exclusion among refugees.

The UNHCR office in Ethiopia explained to Global Voices in an interview that the BIMS system is an additional feature of refugee registration that aims to enhance the profiling of refugees, as well as collect information to enhance self-reliance and eventual inclusion.

This is vital for refugees, as the government-recognized identity documentation can constitute proof of legal identity, which is key for the legal, socio-economic and digital inclusion of refugees within host communities. … The system also removes the risk of multiple registrations or identity theft.

BIMS is currently implemented in all 26 refugee camps across Ethiopia as well as urban and other centers where refugees are sheltered.

Several refugees at Jewi camp, located in the western Gambella region and Hitsats, in the northern region of Tigray, told Global Voices that the UNHCR staff never mentioned the drawbacks of biometric technology.

The digital registration process captures multiple characteristics including fingerprints, iris recognition, facial structure and voice. The process, therefore, has led to concerns among refugees over privacy infringement (when data is shared with third parties) and exclusion from essential services upon refusal.

When the technology was first introduced, most refugees were not aware of the potential risks of digital registration until some of the more educated people in the camps started talking about its implications.

One South Sudanese refugee in Jewi camp who did not want his name revealed due to security concerns told Global Voices that they were briefed about the biometric registration without any explanation by camp authorities of these risks.

Digital registration could lead to serious repercussions for those refugees who do not want their information shared with either their host country or country of origin for fears of discrimination, forced repatriation or retaliation, some refugees told Global Voices.

In Hitsat camp, Eritrean refugees who were in the military fear that the Ethiopian government might share their data with the Eritrean government.

Eritrean refugees became especially concerned after the recent rapprochement of Ethiopia and Eritrea, who restored diplomatic ties in July 2018, ending two decades of hostility. The two neighbors fought a bloody border war from 1998 to 2000, which killed approximately 70,000 people.

Biometric and personal data collected by UNHCR are reportedly shared with third parties, a claim that Gebregzabiher, the UNHCR official, rejected: “Refugee data are not shared with any external parties. The UNHCR data protection policies govern the data protection for all data owned by UNHCR.”

What also makes the digital ID registration risky is the fact that Ethiopia does not have laws specifically designed to deal with privacy and data protection issues — except a few sets of rules contained in various pieces of legislation that guarantee the right to privacy.

“UNHCR must respect the rights of every person going through the registration process,’’ one Eritrean refugee told Global Voices, also emphasizing the need “to understand why biometric data is being collected and how it will be used as well as the potential risks.”

Gebregzabiher, the UNHCR spokesperson in Ethiopia, denied the refugees’ claims. He told Global Voices that they do provide refugees with explanations on the “benefits and implications” of the new system before embarking on the exercise. When Global Voices asked Gebregzabiher to clarify what he meant by “implications,” he said: “the disadvantages of not implementing the digital system.”

“It was clarified to the refugees that the higher standard of registration means better protection, better-targeted programming, enhanced data integrity and protection of data fraud,” Gebregzabiher told Global Voices.

Refugees who spoke to Global Voices said that frustrations are rising at camps over the potential risks of the digital ID and as a result, there is growing defiance toward the unpopular digital identification system. One refugee at Hitsats camp, who also wished to remain anonymous, said:

At first, we had no knowledge of the risks of recognition. Most of us completed the biometric registration out of honesty and due to the trust we have for UNHCR and Ethiopia.

This person told Global Voices that they were not asked for consent before their biometric data was collected.

Another refugee who also asked for anonymity due to security concerns said:

The registration process doesn’t embrace consent. Being asked for consent is seen as a luxury right. We get registered as a means of force because we don’t have any other option to get food or protection.

‘An obligation for survival’

Refugees have been told that those who refuse to participate in the digital registration are excluded from receiving UNHCR aid such as food rations or any other assistance, essentially giving them no choice but to oblige the exercise.

Several refugees in Hitsats and Jewi camps who spoke with Global Voices by phone said they are not comfortable with the newly introduced digital registration system and question its benefits.

A former Eritrean soldier who wished to remain anonymous due to security concerns said:

Unlike what the UNHCR staff is saying, the new digital registration system didn’t initiate any new special benefits package. We are getting the same usual assistance like food rations and other non-food items we used to get. … I doubt if the new system would at all bring any extra aid benefits.

For one Eritrean refugee, a mother of one who also requested anonymity, the obligation of digital registration is seen as a precondition to receiving the basic services from the UN refugee agency:

It is appalling to see UNHCR using digital registration as an obligation for survival. … I felt like I was held hostage for food and shelter by the one UN agency trusted to lean on.

Gebregzabiher, the UNHCR spokesman, noted that he had not yet seen anyone refuse registration.

“The launch of the exercise was preceded by a massive awareness-raising campaign so that refugees have a proper understanding of the benefits of the new registration system and collaborate with the experts doing the registration. As such, there was no resistance from refugees whatsoever,” Gebregzabiher said.

However, the refugees whom Global Voices spoke to in Ethiopia said several refugees who refused to register had to leave the camps.

One South Sudanese refugee who wished to remain anonymous said that the “majority of those who refuse registration is out of the camp since they were told to do so. Some of them stay partially in the camp and others have integrated themselves to host communities in Gambella while others had to return back to South Sudan.”

Global Voices further learned that at Jewi refugee camp, followers of certain Christian groups such as Protestants, the Messianic Jewish Church of God and Congregation of Yawuhe, also refused the registration process on religious grounds.