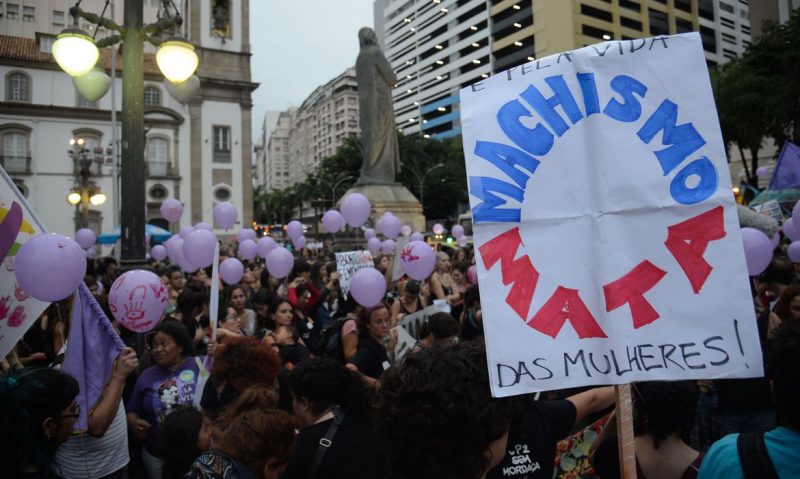 This story is part of Global Voices’ special coverage on gender-violence in Latin America [1].

While Brazil's murder rate declines, femicide [2] — the killing of women as a result of domestic violence or on account of gender, usually by a man and very often her partner [3] — is on the rise.

In 2019, the overall murders of men and women in Brazil dropped 19 percent in comparison to 2018, but femicides had a 12 percent increase, according to an analysis by news outlet G1 [4] based on official data by state governments.

Brazil ranks fifth in femicide [5] rates worldwide, according to the World Health Organization [6], and the staggering numbers have been called “alarming” [7] by the Inter-American Commission on Human Rights (IACHR).

But the explanation recent increase might lie with a recent legislative change: In 2015, Brazil added [8] the crime of femicide to its penal code. Femicide is now an aggravating factor in murder cases, with even harsher penalties [9] when the victims are pregnant, disabled, and under the age of 14 or over 60.

The executive director of the Brazilian Public Safety Forum, Samira Bueno has been analyzing the data on violence for years for the Atlas of Violence [10], a long-established annual study of violence in Brazil published the Institute for Applied Economic Research (Ipea).

According to Bueno, the law has encouraged law enforcement to distinguish femicide from overall homicides, naturally leading to an increase in crimes framed as such. Speaking with Global Voices via telephone, she said:

In this context, the number of deaths is an absolute number, but the number of femicides is variable since it depends on the interpretation given by investigators when the crime occurs. To see these numbers growing is a positive aspect and shows engagement and awareness by the authorities.

However, there has also been an actual increase in all crimes related to gender-violence, such as bodily injury resulting from domestic violence and rape [11]. Bueno also points:

Most crimes of femicide stem from domestic violence, which is on the rise. This is why the issue has become central in Brazil. Gender-based violence is still our “Achilles” heel in terms of public security policy.

Bueno considers this a very peculiar moment in Brazil’s history:

We have never had so many laws tackling violence against women. It's an important progress, but we need to have the clarity that laws don't change behavior.

According to Bueno, there are three key points concerning gender violence today in Brazil:

Black women are the leading victims

Between 2007 and 2017, the murder rate of black women grew 29.9 percent compared to 4.5 percent of non-black women. Over 65 percent of all women who were murdered in 2017 were black, according to the Atlas of Violence. Bueno notes:

Race and class are key elements to understand gender-based violence. Black women have less education, will likely live in the outskirts, which makes it harder for them to access public services. They have lower wages than white women with the same education.

The overlapping of gender pay inequity and racism also makes the group the most financially vulnerable in the country: They earn on average BRL 1.394 (around 300 US Dollars) a month, which is less than half the average for white men [12], BRL 3.138 (697 US Dollar). She adds:

President Jair Bolsonaro said [13] in February that efforts to fight gender-based violence do not need more money; what is needed is “a change in attitude and behavior” as well as more “awareness”.

The Minister of Women, Family and Human Rights, Damares Alves has been the government’s spokesperson [14] on issues related to gender-based violence. An attorney and evangelical pastor, Alves is known for her conservative stance on women’s rights and gender identity, often grounded on her religious beliefs.

Meanwhile, a bill that would grant victims of domestic violence financial support has been stalled on the Chamber of Deputies for seven years [18].

One of the first campaign promises delivered by Bolsonaro was to ease gun rules [19], which could lead to more deaths due to domestic violence [20]. According to Bueno, weapons used in femicides are “whatever the perpetrator can find in a moment of rage.”

With the president's executive orders, marksmen, hunters, and collectors are now allowed to transport loaded weapons; the limit on ammunition purchases was raised from 50 to 5,000 cartridges for permitted guns, and the process to import a gun or transfer ownership was simplified.

According to the Atlas of Violence, the number of femicides that happened both inside the victim’s residence and by a firearm has increased since 2015. An award-winning study [21] conducted by Ipea researcher Daniel Ricardo de Castro Cerqueira predicts that an increase of one percent in the number of guns in the country will lead to a two percent increase in homicides.

The scenario is worrisome in and of itself; having more guns circulating can be devastating.