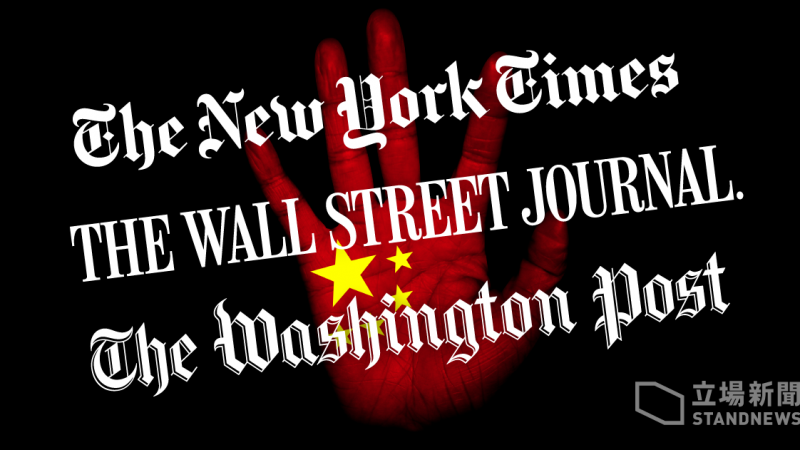 Image from the Stand News.

On March 18, China announced that it is expelling American journalists working for three major news media outlets, namely the New York Times, the Wall Street Journal and the Washington Post. The ban would be extended to Hong Kong and Macau despite the fact that both ex-colonial cities are supposed to be autonomous under the principle of “One Country Two Systems”.

International press freedom watchdog Reporters Without Borders slammed Beijing's decision calling out “China’s aggressive moves against press freedom in the world” and stressed the significance of transparency amidst the COVID-19 pandemic.

In its March 18 announcement, China stressed that the move was a response to the U.S government's designation of five Chinese state media outlets as foreign government agents on February 19. Under the Foreign Missions Act, staff members of the five listed Chinese media outlets — Xinhua, China Global Television Network (CGTN), China Radio International, China Daily, and Hai Tian Development USA — would have to register with the U.S. State Department. The outlets also have to declare their U.S. real estate holdings and seek approval for future purchases.

On the same day as the U.S. State Department decision, China expelled three Wall Street Journal reporters after the newspaper refused to apologize over an opinion column headline which referred to China as “the real sick man of Asia”.

The U.S government went on to issue a personnel cap on March 3 for the above Chinese media outlets from 160 to 100 employees. Mike Pompeo, U.S. Secretary of the State said that the restriction is in retaliation for Beijing’s “increasingly harsh harassment and intimidation” of American journalists and it aims to reset a “level playing field” and “spur Beijing to adopt a more fair and reciprocal approach” to foreign press in China.

However, China decided to expel more American journalists. The Ministry of Foreign Affairs demanded that all American journalists working for the New York Times, the Wall Street Journal and the Washington Post return their press cards (which were due to expire this year) within 10 days. It is estimated at least 13 journalists would be expelled.

In addition, the Ministry also demanded the above three media outlets together with Time Magazine and Radio Free Asia register their staff, financial status and assets in China with Chinese authorities. The announcement also stressed that expelled journalists would not be allowed to report from Hong Kong and Macau.

In the daily press briefing, Foreign Ministry spokesman Geng Shuang said that China would be “compelled” to take further countermeasures targeting U.S. media outlets and journalists if the U.S. refuses to change its policy.

Hong Kong has been a safe harbor for foreign journalists working in Asia for decades given the special administrative status under the principle of “One Country Two Systems”. In response to Beijing's new policy, Edward Yau Tang-wah Secretary for Commerce and Economic Development of Hong Kong commented that the government would act according to the principle of “One Country and Two Systems”.

The answer is highly ambivalent as the Hong Kong Basic Law has guaranteed freedom of speech and freedom of the press in Hong Kong since its enactment in 1997. It also states that the Hong Kong government may apply immigration controls on entry into, stay and departure of people from foreign states and regions. At the same time, in 2018, the Hong Kong government rejected a visa renewal for Foreign Correspondents’ Club’s (FCC) Vice President Victor Mallet who is also the Financial Times’ Asia news editor. The political gesture came after Mallet chaired a talk by pro-independence activist Andy Chan at the press club.

The FCC slammed Beijing’s recent move to extend the American media outlet ban to Hong Kong as a “serious erosion” of the “One Country, Two Systems” principle. A spokesperson from the Chinese Commissioner’s office in Hong Kong defended Beijing’s stance and told FCC to “address its complaints to the US administration, urging the latter to immediately change course, undo the damage, and stop its political oppression of and arbitrary restrictions on Chinese media organisations.”

It is as if Beijing is directly imposing its authority on Hong Kong’s Immigration Department and prohibiting the issuance of work permits.

Reporter Without Border’s East Asia Bureau head Cédric Alviani pointed out that the incident is a move “against press freedom in the world”. He stressed:

The media targeted by China enforce and abide by the principles of ethical journalism—including editorial independence and the verification of facts for the public benefit—while the Chinese state media officially serve as mouthpieces for the Chinese Communist Party.

The despotic control of news and information by Beijing had a very negative impact at the starting point of this coronavirus epidemic… Chinese president Xi Jinping has a huge responsibility in front of all human beings.