Carnival is a ritual with deep, restorative roots 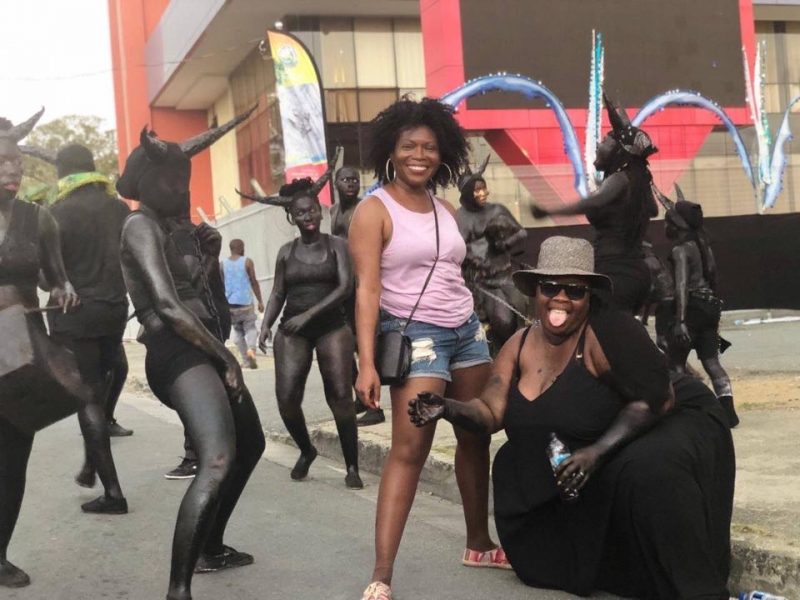 In an effort to stem the spread of COVID-19, Trinidad and Tobago will shut its borders at midnight on March 17, 2020 but just three weeks ago, Carnival was a reminder of freer times. Trinidad and Tobago's annual Carnival celebrations, which culminate each year in a street parade on the Monday and Tuesday before Ash Wednesday, is a deeply rooted tradition that allows participants to connect with their history, their culture and themselves.

In an article for Caribbean Beat, Attillah Springer describes the Canboulay Riots — now re-enacted every year as Kambule — as the roots of J'Ouvert, the ritual loosely translated as “the opening of the day,” which heralds the official start of the Carnival. Springer writes:

[…We] know the idea that Canboulay is a French Creole version of cannes brulées — the burning of the canes. But we also know that the scholarship of historian Maureen Warner-Lewis cites kambule as a Kikongo word meaning ‘procession.’ We reflect on the conflation of the two terms: the idea of the burned cane as a symbol of plantation life and death, and the idea of the early morning procession that became J’Ouvert, in which the ex-enslaved would recount the horrors of that time, while protesting against current injustices. And still in the midst of all that shrieking pain and profanity, they would find time for ritual.

This idea of ritual and self-expression fascinates sexologist Onika Henry, who has been observing the ways in which women can express and explore their sexuality through traditional Carnival masquerade characters. As a licensed sexuality consultant and theatre arts professional, Carnival was the natural intersection of her two areas of expertise. She has studied, observed and even given a TEDxPortofSpain Talk about reclaiming sexual identity through Carnival.

Henry first began to explore Carnival as a form of healing when she heard of a woman using the Jab Molassie character, also known as a Molasses or Tar Devil, as a channel to express the range of emotions she felt after falling victim to sexual violence; it is a topic Henry continues to explore.

Jab Molassies, one of the most intimidating Carnival characters with its sharp trident and forceful movements, allowed her “a space,” as Henry puts it, “to release trauma from her body, but also to move her body however she wanted.”

Speaking with Global Voices by telephone, Henry noted that this form of healing is not limited to specific characters: “Humans and sex are very complex, so anyone can find healing through a character that speaks to them.” For instance, the popular Midnight Robber character might offer people a safe space in which to examine the more masculine side of themselves.

At the other end of the spectrum is Dame Lorraine. Originally intended to mock the wives of plantation owners, the costume visually exaggerates the physical concept of femininity by emphasising enormous breasts and ample buttocks. According to Henry, this character can also be used in a variety of ways, including the exploration of gender roles. Interestingly, men often play Dames Lorraine, which affords them the opportunity to experience not only how women see the world — but also how the world sees them.

Because Carnival characters are often masked, with faces covered by paint, mud, or in costume, masqueraders are fully able to embody the characters they choose, while retaining their anonymity. In Caribbean societies, female sexuality is generally a topic that is discussed in private — ironic, considering that during Carnival, the lion's share of masqueraders is proud to show off their bodies. At the same time, however, sexuality is a complex topic — intricate, personal and largely tied in with social conventions.

In Trinidad and Tobago, the lack of sexual education programmes in schools likely contributes to misunderstandings about the body and the attitude to sex as a whole. Religion also factors in, as many of the country's religious bodies push an abstinence-only approach. Henry, however, is confident that Carnival can help the country develop a healthy relationship with sexuality and sensuality. Like Carnival, this involves going back to the country's roots.

Henry talks of studies which show how Trinidad and Tobago's First Peoples, as well as the cultures of Africa and India, had less rigid and binary systems when it came to life, sex, gender, and work — beliefs that changed drastically after colonisation, when Eurocentric views were forced upon the indigenous peoples, and later, the slave and indentured labourer populations.

Colonisation tried its best to stifle the majority of these traditions and beliefs, but Carnival — that bastion of masquerade and self-expression — creatively surmounted the challenges. Henry explained:

[It] became a way of [our ancestors] keeping their beliefs and allowing them to embody those practices without being disciplined for it.

The restrictions on colonised people also encompassed expectations around women's behaviour. While these have naturally evolved over time, modern-day Trinidad and Tobago still has “rules and roles” as Henry describes it. Carnival, though, is a way for women to defy those expectations.

Could this explain the popularity of skimpy Carnival costumes? Henry thinks this is just one lens through which to have discussions about Carnival and women's participation:

In my opinion, because women — for so many centuries — have been told what to wear, or told if they show too much skin that they are ‘less than,’ Carnival is a way for them to reject that and say, ‘No! I can wear what I want, be who I want and still be valuable.’

Women are the ones with the power to choose their costumes for Carnival, she says. They decide how they want to costume to look on their body:

Near-nakedness is a costume in and of itself; [it] becomes the costume. Accepting and loving the body and saying, ‘This is what I look like and that doesn't mean I don't deserve pleasure or that somehow, I should be denied the right to move how I want and express myself how I want for these two days out of the 365 days of the year.’

According to Henry, women can learn from these essential elements of Carnival tradition and implement them into everyday life by creating spaces to be themselves and challenging taboos.

Creating such a space, she says, merely involves replicating the “safe space” that Carnival creates for female sexual expression and pleasure. The key, however, is not to immediately go into sexual situations:

Rather, make your daily walk one that is pleasure-based, one that accepts the body in whatever state it is.

This can be done in the simplest ways, from savouring the texture and flavour of a piece of chocolate to buying clothes with fabric that feels good on the body.

As for taboos, Henry says that is the job of Carnival. Challenging hierarchies and social conventions, views of sex and gender — or any matter constrained by religious or social norms — is a way to use the Carnival spirit to approach things differently. Practising these elements of masquerade in everyday life, Henry says, “is a way of liberating ourselves on different levels.”