The health sector is facing a shortage of face masks 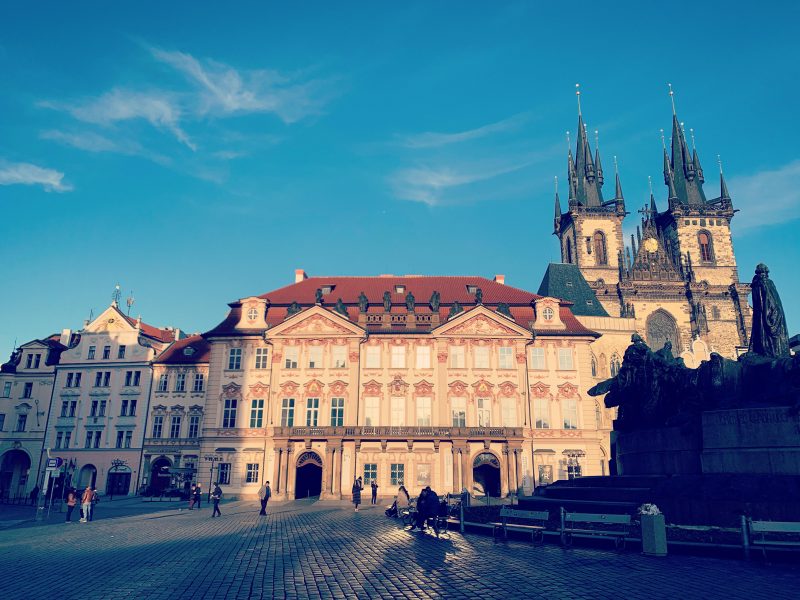 After the Czech government announced drastic measures on March 10 leading to the closing of schools, followed by a state of emergency declared on March 12, Czech people find themselves thrown into chaos after authorities issued conflicting statements.

At the time of publishing, there were 434 confirmed cases of COVID-19 in the Czech Republic, whose population totals 10 million.

At midnight on March 16, the government imposed a nationwide quarantine with noticeable exceptions: people are allowed to go to work, and to go out to buy food, medical supplies, go to the bank or visit doctors. Towns with larger clusters, however, are under stricter measures, with residents forbidden to travel elsewhere within the country.

The decision to shut down businesses came four days after authorities had announced a state of emergency. At that day, on March 12, the government sent the following SMS message to all mobile phone users in the Czech Republic:

Announcement of the Czech government: starting March 14, 2020, at 6AM, to March 24, 2020, 6AM, the government has decided to close all shops EXCEPT for stores selling food, pharmacies, drugstores, stores selling electronics, pump stations, shops selling tobacco and newspapers, and certain other stores. Details available on vlada.cz. Follow the media.

Citizens were caught by surprise as less than 24 hours earlier Prime Minister Andrej Babiš had said on Twitter that authorities weren't planning to close shops. The tweet has since been deleted:

Some people spread fake news on Facebook, saying we will shutting down shops. It is not true, we never said anything like that and do not plan such thing. I am sad that some people behave like that.

To add to the confusion, on March 15, the government hinted it would impose a nation-wide quarantine on the same day, starting at 4 p.m, but delayed the decision until close to midnight. 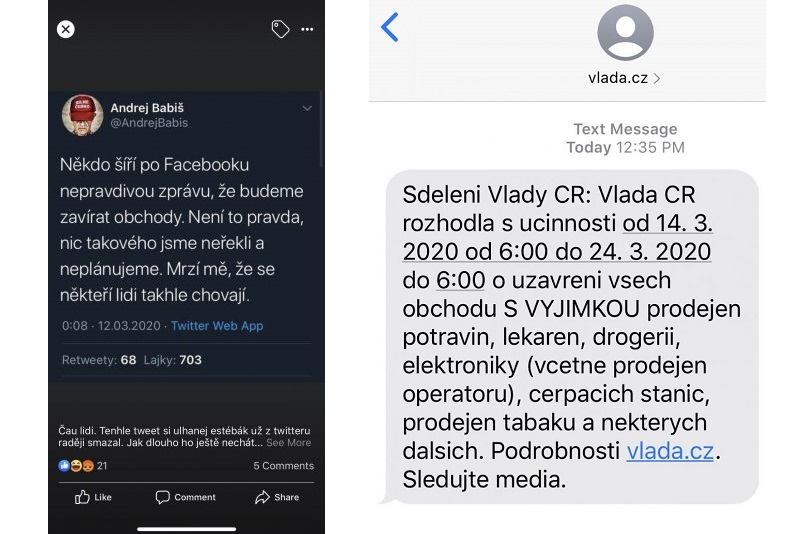 Left: Screen capture of deleted tweet from March 12 by Czech Prime Minister Andrej Babiš declaring the government would never order the closure of shops in the country. Right: SMS sent to all users of Czech mobile numbers on March 14 announcing a state of emergency and a closure of most shops. Photo by Filip Noubel, used with permission.

The back-and-forth and contradicting statements have fueled panic buying, adding tremendous pressure on shop assistants as one article reports:

According to [Tomáš Prouza, head of the Union of commerce and tourism], there is an acute lack of staff, because part of shop assistants have to be home to take care of their children and part of them went back home outside of the Czech Republic, mostly to Ukraine. We are missing about 20 thousand people.

The Czech Republic has a large community of Ukrainian migrant workers employed mostly in the restaurant, retail and construction industries.

PM Babiš is a controversial politician who is also under investigation for possible abuse of European Union (EU) subsidies and is known for populist stances. 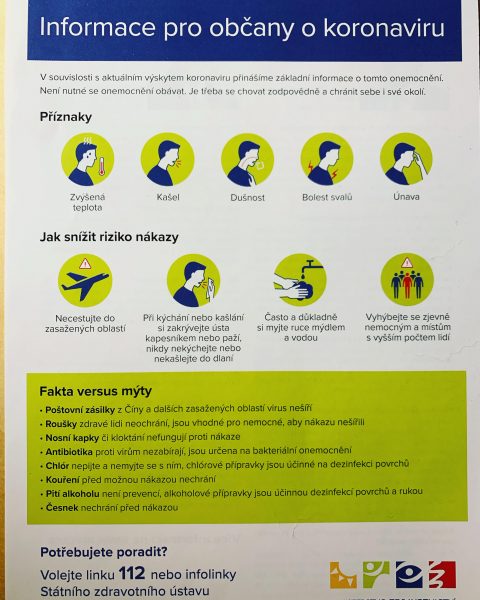 Leaflet distributed by the Czech Ministry of Health in mailboxes providing information and instructions about COVID-19. Photo by Filip Noubel, used with permission.

Czech Health Minister Adam Vojtěch admitted that the medical sector is facing a mask shortage of the order of hundreds of thousands, if not one million, according to daily newspaper iDnes. Dagmar Žitníková, head of the Alliance of Medical Trade Unions, told the publication:

We have informed the Prime Minister that they can take whatever quarantine measures, but if medical staff in the field have no masks, then it is useless.

The government claims that the distribution of masks is ongoing, but journalists are questioning whether that's true, such as in this article:

The contract for 5 million masks that were supposed to reach the Czech Republic on Monday [March 16], has been violated, according to Babiš. A Czech company ordered them in China, and paid for it, but was cheated, according to the Prime Minister.

The Czech government has forcibly purchased the entire production of local manufacturers of face masks, even though they had been pre-sold to other buyers. Now the former clients claim the government has been slow to distribute the masks. This article in Seznam Zprávy, an online daily, reports:

The state has cut off private hospitals, doctor offices or non-governmental organizations. Even though they have ordered our goods, and paid in late January, we are not allowed to deliver the goods, said Jiří Kůs, head of the Association of nanotechnology industry in the Czech Republic.

One of the most outspoken critics of the central government's failure to ensure access to masks is Prague's mayor Zdeněk Hřib, from the opposition Pirate Party, who is also a doctor. He tweeted on March 14:

I am disappointed to see that the government pretends in the media that Prague [administration] already received medical supplies yesterday. In fact, the reality is quite different. Besides 50 masks provided to the Prague emergency services, we did not receive anything.

On top of all that, on a leaflet distributed by the Ministry of Health during the week of March 9 to 15, a section titled “facts against myths” included a recommendation that was perceived as vague:

WHO recommends that healthy people wear masks if they are taking care of a sick person.

Meanwhile, a new movement encouraging people to produce their own masks and wear them has spread through several hashtags, such as #chranimnejslabsi (“we protect the weaker”), and #rouskanenitrapna (“wearing masks is not embarrassing”) and #chranimtebechranimsebe (“I protect you so I protect myself”).

According to news site Aktualne.cz, social media influencers are also promoting the use of masks:

Author Peter Ludwig announced on his Instagram account, where he has a following of 16,000 people, that he wants to become a “mask influencer” and spread awareness. He already created the hashtag #rouškyvšem [#masksforall] and young people are already joining his initiative.