Cooped up? Trinidad & Tobago's Bocas LitFest has released its 2020 longlist

There's something for everyone — poetry, fiction, and literary nonfiction

Covers for three of the nine books longlisted for the 2020 Bocas Prize, sponsored by One Caribbean Media. Image courtesy Bocas LitFest, used with permission.

With Trinidad and Tobago closing its borders, Jamaica being declared a disaster zone, and new Caribbean territories declaring their own index cases of COVID-19, the outbreak is re-shaping life in the region, with people practising social distancing and in many cases, self-quarantining.

Humans are social creatures, though, so restrictions on social gatherings can be tough, particularly for Caribbean people, who love socialising so much they've even got a special word for it: liming. Let's face it, there's only so much Netflix you can watch, so many hours you can spend scrolling through social media feeds. Luckily, Trinidad and Tobago's beloved literary festival, Bocas, which is celebrating its tenth anniversary, has released its longlist of “nine books by writers with roots in seven Caribbean territories” for the 2020 OCM Bocas Prize for Caribbean Literature.

The prize recognises books in three different genres — poetry, fiction, and literary non-fiction — published by Caribbean authors in the preceding year. The winner of the prize, worth $10,000 United States dollars, will be announced in May 2020. The festival itself was meant to take place from May 1-3, but given the effects of the COVID-19 pandemic, it was announced today that there will be a postponement to September 18-20, 2020.

The 2020 longlist boasts seven women writers and a range of titles that are sure to keep you riveted during your COVID-19 quarantine. 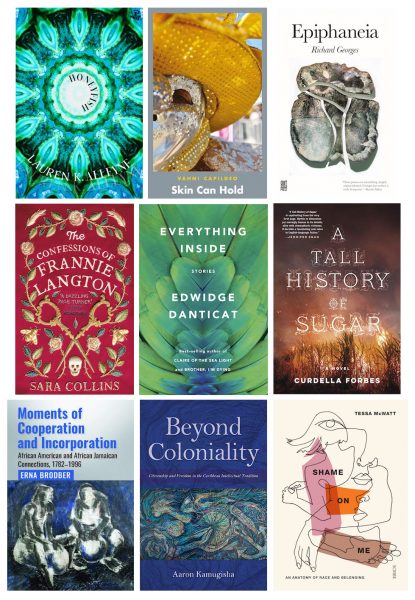 Compilation image of book covers for the nine books longlisted for the 2020 Bocas Prize, sponsored by One Caribbean Media. Image courtesy Bocas LitFest, used with permission.

According to the judging panel, chaired this year by author Earl Lovelace, Trinidad-born, United States-based writer Lauren K. Alleyne's “Honeyfish” was chosen for “the refusal of silence [it] issues with its references to the dangers faced by the Black body in ‘America.’” Her poems speak to themes of legacy, inheritance, and survival.

“Skin Can Hold,” by acclaimed Trinidadian-Scottish poet, Vahni Capildeo, creates a “compelling, dazzling” world in which speakers react to writers and thinkers ranging from Martin Carter to Shakespeare. A refreshingly original piece of work, the judges suggested that the collection's “inherent hybridity […] raises the bar for what poetry can formally achieve.”

From the British Virgin Islands comes Richard Georges’ “Epiphaneia,” set in the aftermath of Hurricane Irma. Particularly relevant for citizens of small island developing states (SIDS) like the Caribbean, as the climate crisis unfolds, these are poems that speak to resilience, something the world needs more than ever right now. In the words of the judges, the poems allow us to “comprehend disaster with an alertness to a complexity that carries us beyond the usual triad of narrative, lamentation, and outrage.”

Women writers own this category, and perhaps the best known of these is Haitian-American writer Edwidge Danticat. Her collection of eight short stories, “Everything Inside,” masterfully captures the broader repercussions of her characters’ situations and how their choices personally affect them — subtle and spellbinding at the same time.

“The Confessions of Frannie Langton” is the first novel by United Kingdom-based Caymanian writer Sara Collins. Part Caribbean Gothic, part psychological thriller, the judges describe it as “a doomed love drama that inescapably shocks its early nineteenth-century audience in the Old Bailey.”

Spanning a time frame that runs from pre-Independence in Jamaica to Donald Trump's America, Curdella Forbes’ “A Tall History of Sugar” tells the tale of a man “born without skin” and his soul mate who shields him from the inevitable fallout over his appearance. The Bocas judges praised the author's innovation, “vivid language” and “expert construction of fragile and robust characters”.

The well-researched, strong literary style of “Moments of Cooperation and Incorporation” by Jamaican Erna Brodber — a compilation of six essays that examine the connections between African-Americans and Jamaica between 1782 and 1996 —captivated the judges by making history come alive.

Barbadian Aaron Kamigusha’s “Beyond Coloniality” looks at the Caribbean's radical intellectual tradition, with particular focus on C.L.R. James and Sylvia Wynter. The judging panel described the book as “an erudite work which combines compelling and deeply researched academic analysis with creative and sophisticated literary criticism … often underscored with a thoughtful and poetic tone.”

Finally, “Shame on Me,” by Guyanese-Canadian Tessa McWatt, examines the concept of identity by embarking on a journey that explores family, race, belonging, and migration, lauded by the judges as “a beautifully written, profoundly moving, and deeply reflective book.”