"Public behaviour will change the landscape." 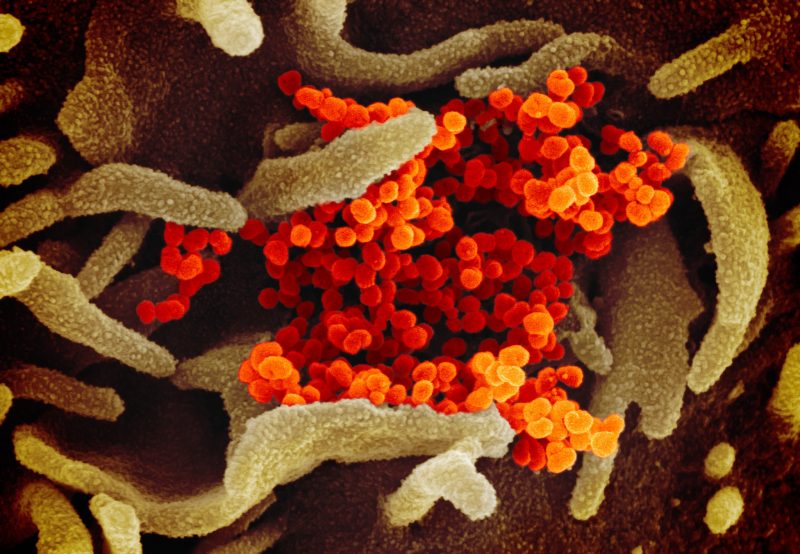 This scanning electron microscope image shows SARS-CoV-2 (orange)—also known as 2019-nCoV, the virus that causes COVID-19—isolated from a patient in the U.S., emerging from the surface of green cells cultured in the lab. Photo credit: NIAID-RML, CC BY 2.0.

Having recently confirmed the country's second COVID-19 case, Trinidad and Tobago's Ministry of Health held a press conference on the afternoon of March 14, 2020, to update citizens on the current situation and the mitigation measures being used.

Minister of Health Terrence Deyalsingh described the government's response to the COVID-19 situation as “forceful” and “decisive”, ever since it instituted its first travel restriction on January 30, adding that the two main hospitals designated to treat cases of the disease were Caura (reputed for its specialisation in treating respiratory conditions) and Couva, located in central Trinidad. Should case numbers surge, he added, the Arima hospital in the northern part of the country would provide additional capacity.

The thoracic medical director at Caura Hospital, Dr. Michelle Trotman, reported that the country's initial COVID-19 case, a 52-year-old man, was improving; doctors expect him to achieve a full recovery. Though the prognosis of the second patient, a 66-year-old man, is more serious, he too is reportedly improving.

Explaining that the virus spreads via access to the mucosa lining found in the eyes, nose and mouth, Trotman reinforced the need for people to be vigilant about hand washing and social distancing, saying, “If it can't get in, it can't be a disease.” This, she said, would require a change in culture, as Trinbagonians tend to be “touchy/feely”.

While most people who may contract COVID-19 will experience mild, flu-like symptoms, Trotman warned that seniors and immune-compromised people must be wary. She also advised that the ministry has developed a questionnaire aimed at helping to screen suspected cases, and that the public should feel confident in the preparedness and capacity of the public health system. As it stands, suspected cases are being tested via nasopharyngeal swabs.

The Accident and Emergency (A&E) departments of most major hospitals now have triage setups aimed at treating patients with flu-like symptoms. The Port of Spain General Hospital, situated in the capital, will have a separate triage area for potential COVID-19 sufferers starting from March 15, and the ministry is paying extra attention to the health and safety of medical personnel, who are in the front line of this battle.

Visiting hours at state hospitals have been restricted; when visitors are allowed, it will typically be one at a time. Meanwhile, only a parent or legal guardian can stay with paediatric patients on the ward.

Making it clear that people should not take actions that present risks to others, Minister of National Security Stuart Young, who also spoke at the press conference, said that “personal and social responsibility” are important factors when it comes to combating COVID-19.

Given that both cases of the disease in Trinidad and Tobago were imported, he said that government-related travel has come to a halt and noted that any trips made by nationals should be “essential” or “emergency” travel. Those who must travel, he said, should immediately self-quarantine for 14 days upon returning home. This is what the 13-member crew of Caribbean Airlines (CAL) flight did once it was established that a passenger — who later died — had tested positive for COVID-19.

It was not clear from the media briefing how exactly the self-quarantine guideline was going to be enforced, but County Medical Officer Dr. Roshan Parasram, who is the country's quarantine authority, noted that the Quarantine Act allows for police officers to ensure compliance through force if necessary. The Act also gives police the right to enter premises, ships or aircraft without a warrant, and to arrest (again without a warrant) anyone they believe has committed an offence against the legislation. As it stands, anyone “obstructing the execution” of the Quarantine Act is liable on conviction to a fine of 6,000 Trinidad and Tobago dollars (approximately 886 United States dollars) and to six months’ imprisonment.

Caribbean Airlines has put an emergency response team in place, furnished staff with safety kits, protective personal equipment (PPE) and sanitation supplies and protocols, and started a 24-hour hotline for employees requiring information or assistance regarding COVID-19 — but in light of the Minister Young's revelation that airports are among the riskiest places to be, the press conference did not address how far precautionary measures for the regional carrier may eventually extend. When CAL flies to New York, for instance, its crew stays in Nassau County, which recently declared a state of emergency as the number of coronavirus cases in Long Island continues to climb.

Minister Deyalsingh, in urging citizens to be responsible, said the “first sensible decision” people should make is to ignore social media, which is “causing more damage than coronavirus right now”.

Minister Young echoed this sentiment, accusing people of using social media channels to make mischief, fearmonger and spread misinformation “for political purposes”. Trinidad and Tobago's next general election is due in September 2020. There are only two “official sources” for information pertaining to COVID-19, Young stressed, “the Ministry of Health and the Ministry of Communications.”

The Trinidad and Tobago Police Service has since warned that under the Summary Offences Act, citizens can be fined or imprisoned for sharing misinformation.

Adding that social media has been turning a pandemic into a “panic-endemic”, Dr. Trotman urged netizens to use social networking platforms to convey proper information about COVID-19 and help the health authorities “fight and beat” the virus, saying, “Public behaviour will change the landscape.”