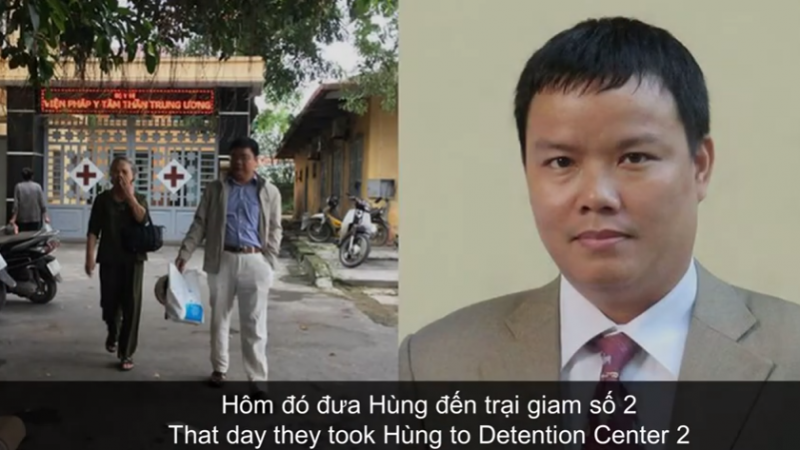 Vietnamese blogger Le Anh Hung was arrested for “abusing democratic freedoms to infringe upon the interests of organizations and individuals.” Screenshot of YouTube video.

This article is from The 88 Project, an independent news site covering Vietnam, and is republished on Global Voices as part of a content-sharing agreement.

One form of psychological abuse in Vietnamese prisons is sending political prisoners to mental institutions against their will, even though they have no history of mental illness. Le Anh Hung's case is one such example. Hung, a blogger and reporter, who often wrote articles sharply criticizing the Vietnamese government, was detained in a mental health facility in 2013 for ten days after police arrested him at his workplace.

Hung was arrested again on July 8, 2018, under Article 331 of the 2015 Criminal Code, for “abusing democratic freedoms to infringe upon the interests of organizations and individuals”. He has been in pre-trial detention ever since.

On April 1, 2019, the investigation agency of the Hanoi public security suddenly transferred Hung to the Central Mental Hospital. On April 24, after the facility had conducted its mental health evaluation, the authorities transferred Hung back to prison, but by May, he was again sent to a mental health hospital. The reason for constantly moving him back and forth remains unclear.

According to his family, throughout the process, Hung appeared exhausted, thin, and generally unhealthy, but urged people to protest on his behalf and request that the authorities stop his forced mental health treatment.

In June 2019, Hung’s mother sent an application to authorities asking for his release so that she could care for him at the family’s home. She said her son's good health degenerated and his spirits were low after being subjected to forced mental health treatments while in detention. Prior to his imprisonment, she confirmed that Hung was healthy and strong, both physically and mentally. It is unclear how the authorities reacted to the petition but Hung remains in detention.

The 88 Project recently interviewed Hung’s mother, Ms. Tran Thi Niem, about his current condition and her desire to care for her son at home. She called on the international community to advocate for Hung’s release. Watch the interview below:

The week of March 8, 2020, fellow activists revealed that Le Anh Hung had called his mother to let her know the authorities had once again increased his anti-psychotic medication, which he is being forced to take against his will. Hung reportedly told his mother the meds made him feel very sick, but he has no choice but to take them, and pleaded with her to call on the international community to raise awareness about his situation.