New COVID-19 disaster area order places a Jamaican community under quarantine, but ‘not under curfew’

"We are using law to create order..." 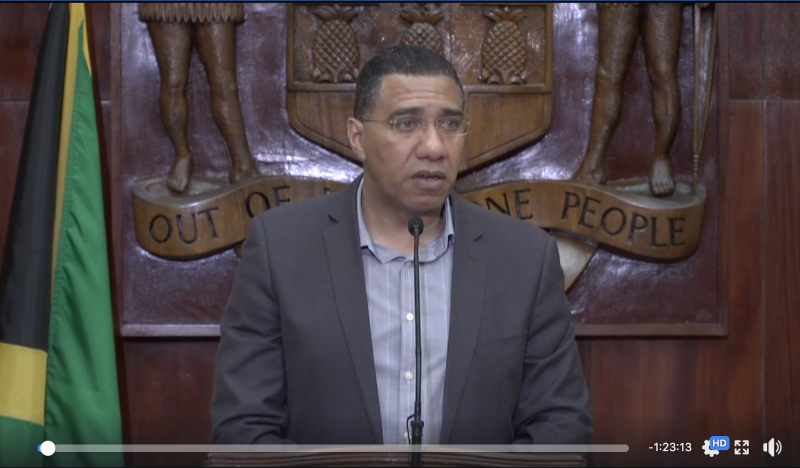 Screenshot of the livestream of Jamaica's Prime Minister Andrew Holness’ most recent press briefing related to COVID-19, which took place at his office, Jamaica House, on the evening of March 13, 2020

“The whole of Jamaica is hereby declared to be a disaster area.” So said Jamaica's solemn-faced prime minister, Andrew Holness, at an evening press briefing at Jamaica House on March 13, 2020. The event was livestreamed on Minister of Health and Wellness Christopher Tufton’s Facebook page.

After six new confirmed cases of COVID-19 were announced earlier that day, bringing Jamaica's current total to eight, Holness cited the move under the Disaster Risk Management Declaration of Disaster Area Order 2020. The legislation, found under Section 26/2 of Jamaica's Disaster Risk Management Act 2015, was triggered by a notice from Desmond McKenzie, the minister responsible for disaster management, because of the COVID-19 threat.

The government has activated the 2015 Disaster Risk Management Act, the Emergency Powers Act and the Public Health Act. This means we can do whatever is required to control the spread of this disease. #COVID #COVID19JAMAICA #covid19containment

The government now has additional legal powers at its disposal to help control and contain the virus, including the ability to quarantine entire communities. Even before Prime Minister Holness’ briefing, the towns of Seven Miles and Eight Miles in Bull Bay, St. Andrew, a few miles to the east of Jamaica's capital Kingston, had already been placed under a 14-day quarantine, as the first confirmed case of COVID-19 had been located in the area. These semi-rural communities comprising around 6,000 homes and businesses, lie along the main coastal road.

“Patient Zero”, a woman who had travelled to Jamaica from the United Kingdom on March 4 to attend a family funeral, was hospitalised several days later. Minister Tufton said that health officials had been tracing contacts for this first COVID-19 case as well as the second, and conducting risk assessments. Two of the island's six new cases were contacts of “Patient Zero”, including her father.

According to Chief Medical Officer Jacqueline Bisasor-McKenzie, the tracing also revealed that more than 30 residents of Bull Bay had contact with the woman, eight of whom were already symptomatic. The Ministry of Health is therefore trying to raise awareness of the illness within the community and educate people, especially the elderly and those with chronic illnesses, about prevention measures.

Residents in the quarantined area will have their movements restricted over the next two weeks, overseen by the country's protective services. The prime minister stressed that the measure did not constitute a curfew, a situation with which many deprived communities are all too familiar — despite its popular public beaches and surf spots, the community suffered a violent crime wave in 2019, due in part to high unemployment rates. The head of the Jamaica Defence Force announced, however, that manned checkpoints were in place, not unlike those used in states of emergency and zones of special operations usually imposed to curb criminal activity in specific areas. The Commissioner of Police urged residents to cooperate, insisting that the measures are in place “to protect” residents and slow the disease’s spread.

Countering concerns about the authorities’ newly expanded powers, Attorney General (AG) Marlene Malahoo Forte noted that Section 20 of the country's Constitution, which empowers the Governor General (Jamaica’s Head of State) to declare a state of disaster, had not been activated. Under the Emergency Powers Act and Public Health Act, she said, the minister of health had “broad investigative powers” and could “do whatever is necessary” to prevent the disease from spreading.

Jamaica's Public Health Act gives officials the right of entry to private premises without residents’ permission or a search warrant. Under “additional regulations” that are being drafted, authorities also have the right to disinfect or even destroy buildings. Food handlers, barbers and hairdressers must be disease-free and submit to medical examination if necessary.

“The powers are very large. Essentially the Minister can do whatever is required to contain the disease,” said the attorney general, adding that residents must answer questions, report illness and refrain from “public mischief.” Under Section 12 of the Quarantine Act, even force can be used if necessary.

While some approved of the strong tone of the AG's presentation, one young human rights activist observed:

The authorities can now enter your private dwelling without warrant, use force if necessary and mash up any facility if they reasonably determine a situation to be a risk to public health. Things getting serious bruh.

It was also announced that the United Kingdom would be added to Jamaica's list of countries on which travel restrictions:

The prime minister has invited retired nurses to assist with the crisis and the country and 21 nurses from Cuba will soon join the cadre of Cuban health professionals already working at medical facilities in Jamaica. The government is reportedly seeking to bring in as many as 100 more, news that was largely welcomed.

Meanwhile, most Jamaicans are concerned about basic necessities such as water, which will be trucked to areas currently receiving none, and electricity. Generally, however, the mood seems to be “so far, so good.” One business leader urged:

Government is so organized rn

People please, save your energy to support the efforts to ensure we have quality life after #COVID19JAMAICA

In a similar vein, the prime minister concluded the press briefing by saying:

“We are using law to create order by ensuring that the state functions […] We are well aware of the legal framework in which we are operating…because there will be life after COVID.”

Meanwhile, Jamaicans, including the residents of Bull Bay, are hunkering down for life under COVID-19, in a country that has been officially declared a disaster area.