COVID-19 in Africa: ‘Unprecedented levels of mobilization’ as nations brace for pandemic 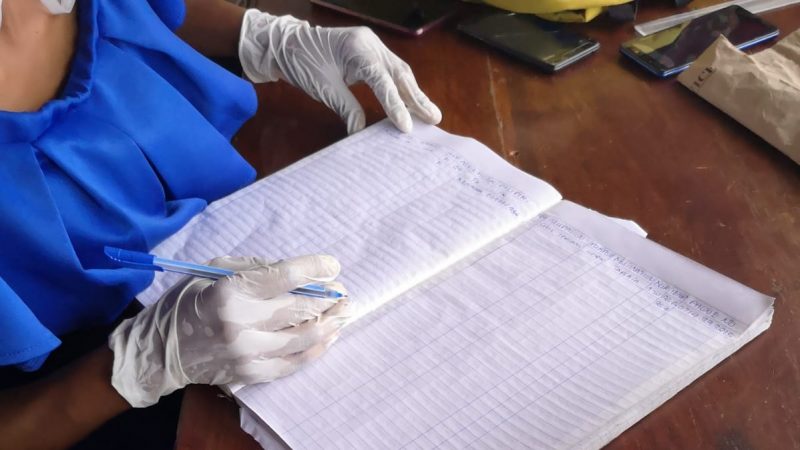 At Kigoma airport, in Tanzania, a health official registers details of passengers coming and going, March 14, 2020. Photo by Pernille Bærendtsen, used with permission.

COVID-19, a previously unknown disease caused by the potentially deadly coronavirus, was declared a pandemic by the World Health Organization (WHO) on March 11. It has claimed the lives of 4,955 people globally as of March 13, 2020, according to WHO.

As of March 14, WHO reports 215 total cases across Africa and five reported deaths.

Nearly every single case of the virus in Africa can be traced back to travel through Europe, which has now become the epicenter of the pandemic. This has prompted several African nations to make the historic decision to place travel restrictions on travelers coming from nations with high numbers of COVID-19 cases.

Read more: An Italian national is the index case of COVID-19 disease in Nigeria

For example, Uganda took the unprecedented measure to restrict travel from 16 countries with high numbers of cases of COVID-19, including China, France, Germany, Italy, Iran, South Korea, Spain, the United Kingdom, and the United States.

Meanwhile, the semi-autonomous island of Zanzibar, part of the United Republic of Tanzania, reportedly announced that it would restrict charter flights from Italy, where COVID-19 cases are soaring. But these restrictions did not apply to China, a country that does major trade and business with Tanzania. Kenya has also halted direct flights from Italy to coastal resorts in Mombasa.

Nigeria has not imposed any travel restrictions but strongly advised against trips to countries with high levels of COVID-19 transmission such as  China, Iran, Italy, Japan, and South Korea. In addition, the West African country has suggested a 14-day self-isolation measure for travelers from these countries.

Liberia, with no known COVID-19 cases but with extensive experience with the highly infectious Ebola disease, has imposed a compulsory 14-day quarantine in an observation center for anyone coming from Germany, where COVID-19 cases are rapidly on the rise. Similarly, Democratic Republic of Congo is implementing a 14-day self-quarantine regimen for anyone flying in from France, Germany, Italy and China.

“The Ebola epidemic in 2014 led to flight shutdowns, visa bans and quarantine regimes that affected thousands of travelers from the three West African countries at the heart of the outbreak,” according to The Globe and Mail.

One netizen called this moment — when African governments are now in the position to ban travelers from Europe, the United States and the United Kingdom — “a turning point in history”:

The turning point of history has arrived pic.twitter.com/lrZ5vepP8U

As the coronavirus continues to spread throughout Africa, citizens and governments alike have debated African nations’ abilities to handle the crisis in terms of health care, disaster preparedness, communication, and response.

But “many African health officials bristle at the suggestion that they are not adequately addressing the crisis, saying there has been an unprecedented level of mobilization for COVID-19, as well as a growing reserve of experience to draw on,” according to the BBC.

Once the first cases were reported in Ethiopia and Kenya, both of which have capital cities that serve as major transport hubs, these nations immediately banned large gatherings and urged citizens to practice “social distancing” — a term used to describe minimizing contact with other people and maintaining a distance of at least six feet if you must interact — to slow the spread of the virus.

When Nigeria alerted the world to the existence of its index COVID-19 case, WHO's director-general, Dr. Tedros Ghebreyesus, praised the Nigeria Center for Disease Control (NCDC) for its transparency and swiftness in sharing the information:

Thank you @NCDCgov & the Government of #Nigeria for the swift & transparent way you have shared the #COVID19 sequence from the country's first case. This a true act of solidarity and an important step in stopping the #coronavirus from spreading further. https://t.co/6fv15oMDTm

In Tanzania, also with no reported cases as of March 14, President John Magufuli still made it a point to encourage social distancing — a major challenge in a region known for its social norms of close, communal contact.

When President Magufuli met with longtime opposition leader Malim Seif Sharif, they set the example by acknowledging each other with a “toe-tap” — a new salutation in a country accustomed to strong, firm handshakes:

Tz President Magufuli (R) exchanges foot greeting with opposition pol Seif Sharif Hamad to promote “no handshake” in these #Coronavirus times. A critic says “anti-democratic Magufuli must have thanked COVID-19, ‘cos it gives him the perfect excuse NOT to shake Opposition hands” pic.twitter.com/0qLsNIgXlB 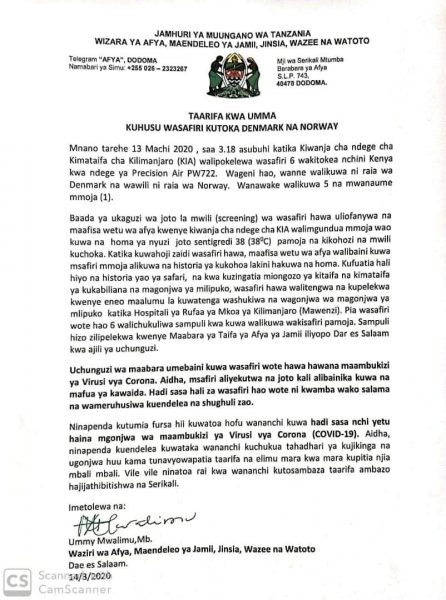 Announcement from Ummy Mwalimu, from the Tanzanian Ministry of Health, Development, Gender, Elderly and Youth.

It is also being reported that Tanzania has preemptively identified three “isolation centers” in the north, east and west regions, in case of a COVID-19 outbreak. “Thermometers have been stockpiled and more than 2,000 health workers trained,” according to the BBC. However, it remains unclear exactly where the centers are located.

Tanzanian health minister Ummy Mwalimu sent out an official statement on March 14 that six travelers from Denmark and Norway en route from Kenya to Tanzania were screened at the Kilimanjaro airport in Arusha, Tanzania. One had a high fever, cough, and exhaustion — all symptoms of COVID-19. Authorities decided to move the group of six into isolation and then they were taken to Rufaa Hospital for testing as a group. All tested negative for COVID-19 and were free to carry on with their activities.

There is some speculation that COVID-19 numbers are low in Africa (as well as in some other parts of the world) because there is not yet adequate testing available.

However, 33 of 47 sub-Saharan African countries currently have testing facilities — a dramatic increase from January 2020, when only South Africa and Senegal had testing capabilities.

Senegal, with just one reported case so far, is reportedly able to test citizens in less than four hours, whereas in some countries, like the United States, it can reportedly take up to a week to get results.

Nigeria's NCDC is publishing daily reports with COVID-19 contact-tracing updates, and also has a free landline and WhatsApp number for citizens to ask COVID-19 related questions.

The Southern African Development Community also held an “extraordinary” session on March 9 in Dar es Salaam, Tanzania, to discuss COVID-19 preparedness and response, urging members to be prepared to put their national emergency plans into action.

Despite such measures, many African nations struggle with adequate health care for all.

Everjoice Win of Zimbabwe tweeted some serious questions about those who may get left behind in this crisis:

How do you self-quarantine in an informal-settlement? Or in a household full of people? How do you ‘stock-up’, when you live from hand to mouth? What will business closures mean for daily/hourly waged workers? Asking for a continent.

In Tanzania, for instance, 25 million people still lack access to clean water — essential for hand-washing, in order to slow the spread of COVID-19.

Yet, the various, coordinated responses in instances where COVID-19 has appeared across the continent, proves that experience and determination go hand in hand.