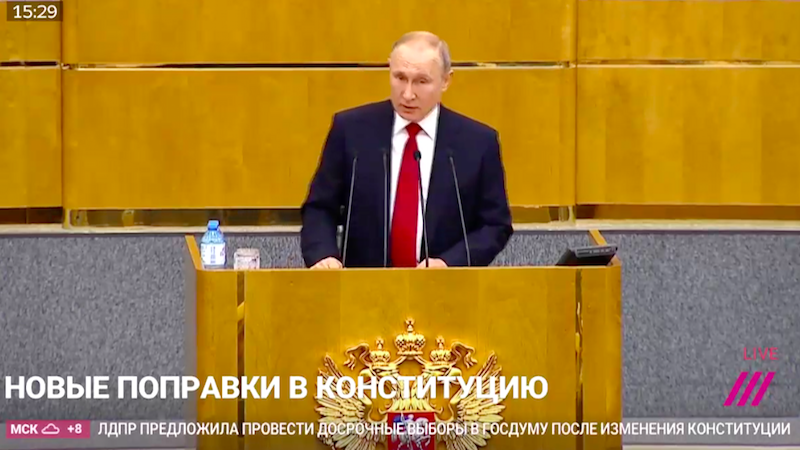 For Vladimir Putin's ambitions, the stars truly are the limit.

On Tuesday, one of the longest standing questions in Russian politics — how long Putin will stay in office — seemed to be answered when amendments were proposed in parliament allowing him to serve as president for a further 16 years. During the second reading of a package of constitutional amendments by the State Duma, Valentina Tereshkova, a lawmaker from the ruling United Russia party better known for being the first woman in space, proposed “resetting” the count of Russia's presidential terms.

At present a Russian president can only serve to two consecutive terms, obliging Putin to leave office in 2024. If Putin does end up staying in office until 2036, he will be the longest serving Russian ruler since Peter the Great.

After Tereshkova's proposal, the Duma adjourned “for consultations with the president.” Putin then made a rare address before the legislature in which he accepted the proposals on one condition: that they are endorsed by Russia's Constitutional Court. Putin also suggested that these changes be voted on by the public in a referendum on April 24, along with a package of other reforms.

Many observers describe these moves as choreographed, and certainly expect no surprises from the referendum. But the “zeroing” (from the Russian word “обнуление”) of presidential terms was by no means foretold. This is because the major preoccupation in Russian politics of late has been the identity of Putin's eventual successor. The new constitutional changes, designed to significantly empower the parliament, were often understood by analysts as an elaborate attempt to prepare for that transition, allowing Putin to retain an informal hold over the levers of power while overseeing his successor's rule from day one.

There have been good grounds for that interpretation. In past years, Putin has made numerous vague statements about change and continuity. In January, he voiced concern about a repeat of the late Soviet period when leaders “stayed in power for decades,” a statement which he “corrected” on Tuesday by declaring that the situation in modern Russia was completely different as leaders were selected in elections, and not by “agreements inside the party.”

Resetting the counter on presidential terms was seen as a wildly unlikely scenario. On February 11, the co-chair of the working group on the amendments Andrey Klishas dismissed all talk [3] of doing so as “conspiracy theories.” But the option had been raised by Vladislav Surkov in an interview [4] given in February upon leaving his post as a presidential advisor. It may have been considered in government circles even earlier; last December, political scientist Tatyana Stanovaya recalled [5] that in 2012, Putin supported an initiative by the Communist Party to remove the words “consecutively” from the constitutional provision limiting presidential terms. Importantly, at the time he suggested that this would “not have a retroactive effect,” thereby allowing him to start the counter anew.

Predictably, Russia's opposition is incensed. Activists of the PutinIsForever.One [6] website have simply posted the Russian constitution and replaced every mention of the word “President” with the name “Vladimir Putin.” Some RuNet users are using graphic design tools to depict a geriatric Putin at the end of his final term in 2036.

Russian graphic designer Yevgeny Tonkonogy writes that he drew the following image ten years ago, “but it hasn't lost its relevance”:

Putin and the “reset” constitution is like a new season of Doctor Who. The character was given a limited lifecycle of 13 regenerations, but now the problem has been solved and the series can be shown eternally.

This user sarcastically drew on the rising threat of the coronavirus:

Due to quarantine, they're forbidding Putin from leaving the presidential post

While Tereshkova bears the brunt of much of their ire:

Valentina Tereshkova is the first woman to boldly venture into the cold darkness of space, and then brought the whole country along with her

But behind this black humour is concern among many commentators that this represents an even more worrying precedent for undermining constitutional rule. If similar worries were raised [12] over the package of constitutional amendments, they are even stronger now.

Political scientist Maria Snegovaya sees this as a formalisation of dictatorship:

In principle, as far as I remember the literature, simply removing limits on the number of terms (or “zeroing” them as in this case) is dictators’ favourite option for remaining in power. Here, apparently, several factors play a role:

- It's simpler, it works by inertia. There's no need to change the distribution of powers or system of governance – that's already set up.
– Complete deinstitutionalisation. There's no threat from other branches of government.
– Well, and apparently Russians don't present any serious electoral risk. They'll vote, somehow.

Yan Shenkman, a correspondent for Novaya Gazeta, wrote on Facebook that political freedom would remain in the doldrums, referring to the young men imprisoned earlier this year at protests and defendants in the controversial “Network Case.” [15]

I'm all for “resetting” Putin's [presidential] terms, I don't mind. But just let them “reset” the sentences of [Konstantin] Kotov, [Dmitry] Pchelintsev, [Daniil] Beglets, and other political prisoners.

Search for a strategy

After years of tightening the screws, this is another blow to Russia's tough opposition. On her Telegram channel, Stanovaya compared the mood [18] to that of September 2011, when Dmitry Medvedev proposed that Russia's ruling party nominate Putin as his successor.

Various opposition groups have announced protests in the run-up to the April 24 “national consultation” on the constitutional changes. Once again, wrote [19] columnist Alexander Pluschev for the Russian service of Deutsche Welle on March 11, the opposition are faced with a dilemma: do they boycott the vote, or make a stand and say no at the polls?

Although elections have a habit of turnout out favourably for them, turnout still matters to the Russian authorities. A healthy turnout confers legitimacy. In Denis Volkov's article [20] about Putin's declining approval ratings for Riddle, a website about Russian politics, he suggested that the authorities had hoped to sugar coat the new constitutional changes by focusing on greater social welfare. After these developments, it is highly likely that the referendum will be “personalised” around Putin. Will that help the opposition mobilise against it?

Whatever they do, perhaps the Kremlin has run circles around its critics. This is the grudging conclusion of Stanovaya's widely read March 11 column [21] for the Carnegie Moscow Centre. Initially, she writes, the constitutional reform was portrayed as Putin's attempt to solidify his legacy before leaving office. That impression, while distasteful to the opposition, may not have been enough to gain crucial momentum against the changes:

We have just witnessed one of the most sophisticated acts of chicanery, one of the most impressive special operations of the entirety of Putin's rule. In the first stage, Putin achieved maximum legitimacy for constitutional reform, discussion of which was to be held about anything whatsoever: about God, sovereignty, children, pensions, the State Council, just not about redrafting the basic law to his personal advantage. […] Putin's half-truth took the initiative away from the opposition, which simply wasn't able to bring the people out onto the streets against a socially-oriented constitution. If Putin had mentioned “zeroing” the constitution in his yearly speech on February 15, it would have devalued all discussions about social benefits for the public then and there, providing the most powerful impulse for a protest mobilisation, without even mentioning the extra time they would have had to prepare to disrupt the referendum. Now this time has been cut to a minimum.

However, the sociologist Konstantin Gaaze, in a March 12 column for Vedomosti [22], argues that Putin's move was not a cunning gambit at all. Russia's ruling elite, he argues, have simply decided to stick with what they know:

In January, Putin did not rely on a special operation, but simply on what he knew about those whom he rules every day. For all their vices and fears, the one percent who own everything in the country at the same time govern it through instruments of state power. Therefore, fearing the unknown, they came to the president in tears to ask him to reset the counter and extend his rule. And he granted their request. And so this new constitution has many prizes for the elite. [Putin] is ready to add a few more rungs to the power vertical, and to give a few handouts to those who want more privileges in the here and now. The new constitution, having made the prime minister, judges, and cabinet ministers de facto employees of the Kremlin, makes their appointment or reappointment extraordinarily easy, at a personal whim.

Meanwhile, the fabled cosmonaut Tereshkova insists [23] that “ordinary people,” not politicians, asked her to make her historic proposal. And as the “zeroing” of Putin's term limits is unlikely to meet resistance from the country's politicised constitutional court [24], any change may now depend on those same “ordinary people,” and them alone.