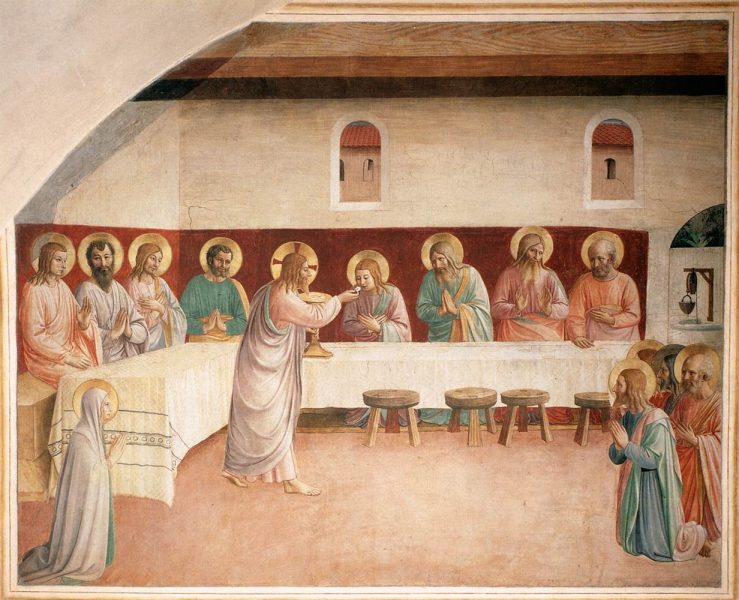 “Institution of the Eucharist,” a 1442 painting by Fra Angelico. Public Domain photo via Wikipedia.

While the number of people with COVID-19 steadily increases in the Balkans, a few Christian churches have refused to change liturgical practices that can contribute to the spread of the coronavirus.

The ritual known as the Holy Communion or Eucharist has Orthodox Christian worshipers drinking consecrated wine by a shared spoon, while Catholics eat thin slices of bread directly from the hand of the priest.

The World Health Organization (WHO) recommends avoiding large gatherings and increased levels of personal hygiene and sanitation in order to minimize the spread of the virus by touch, exchange of bodily fluids, and through the air.

In an official statement dated March 9, the Greek Orthodox Church said it will not be modifying the ritual to comply with safety measures. It also added that the “coronavirus is not transmitted via Holy Communion, and the faithful should pray against the spread of the deadly virus.”

GOC bishop Klimis, the Metropolitan of Peristeri, a suburban municipality near Athens, said that those who believe the virus could spread via religious rituals are blasphemers:

There have been 89 confirmed cases of COVID-19 in Greece, with no deaths so far.

Greek authorities, who have recently closed schools and prohibited gatherings in efforts to prevent transmission, urged the Church to reconsider.

But state officials themselves seem to be ignoring those concerns. On a major religious holiday last Sunday, the president and some government ministers attended a public mass.

In neighboring North Macedonia, the Macedonian Orthodox Church – Ohrid  Archbishopric seems to be following a similar path. Although the church has not yet issued any official statement about the outbreak, it has continued to conduct the Holy Communion normally.

Alarms were raised when the official website of the Prespa-Pelagonia Diocese published a translated article by Russian website Pravoslavie.ru (meaning “Orthodox Christianity”) claiming it's “impossible for believers to be infected during church rituals.”

The text is signed by Russian priest Sergey Adonin, who claims to have knowledge of microbiology and experience working in hospitals. He stressed in the article that the rule of using the same spoon instituted in the 7th century Bizantium has so far done no harm, because “faith in God protects both the parishioners and the priests.”

Also in North Macedonia, right-wing propagandists expressed support to the church. For instance, one conservative TV host — who in the past promoted anti-vax activists — boasted on Twitter to have participated in risky religious rituals:

Sladjana Velkov, an anti-vax celebrity operating in Serbia and North Macedonia, recently declared that the situation is “not serious” and that the new virus is “just a common cold which, like the other common colds, affects only older people or people with compromised immunity.”

Meanwhile from Italy, where over 631 people have died from the infection and more than 10,000 are affected, this user tweeted:

Please, please guys. Here in northern #Italy we made one big mistake. Everybody kept saying “It's just flu” and now our intensive care units are collapsing. Everybody kept going outside like nothing happened and now our grandparents and parents are dying.#coronavirus is not #flu

So far there have been seven confirmed cases of COVID-19 in North Macedonia; 25 in Slovenia; 13 in Croatia; six in Albania; five in Serbia; five in Bosnia; and zero in Montenegro.

There have been 28 cases in Romania and six in Bulgaria.

The world has already witnessed how the novel coronavirus can spread through religious congregations.

Last month, a majority of 7,400 confirmed cases of COVID-19 in South Korea — a country that until then seemed to have the outbreak under control — were traced to the group Shincheonji Church of Jesus.

Criminal charges were filed against the sect — often called a cult — and its 88-year-old leader publicly apologized.

Meanwhile, the Orthodox Diocese of Korea announced changes in its liturgical practices in accordance with the recommendations of the Ministry of Health:

1. During the Divine Liturgy all believers will wear masks.

2. Before entering the Church, they will disinfect their hands with a disinfectant present at the entrance of the Church.

3. They will not shake hands with anyone.

4. They will not kiss the hand of the Clergy.

5. They will not kiss the Icons, but they will bow before them.

6. They will not use the liturgical books at the time of prayer.

7. They will not receive the Antidoron from the Clergy, but on their own as they leave the church.

8. The Agape Meal will not be served following the Sunday Liturgy.

9. The various group meetings of the Faithful as well as the Catechumens will not take place.

Some churches in Europe have adopted similar measures, such as the Catholic church in Italy.

The diocese in Croatia have also enacted restrictive rules and, in France, a pilgrimage site in the city of Lourdes has been shut down.

The Orthodox Church of Romania issued a decree announcing “exceptional measures taken only because of the threat of an epidemic:”

Believers who are afraid of virus transmission may temporarily refrain from kissing the holy icons in the churches. They can exceptionally ask the priest to use their own spoon for the Holy Communion.

After Italy enacted a complete lockdown on national territory, other European states, like the Czech Republic also took more drastic measures on March 10, such as the closure of schools.

The Government of North Macedonia declared a state of emergency and also shut down kindergardens, schools, and universities for two weeks.