In photos: #8M throughout Latin America

Women from the Global Voices community share their photos 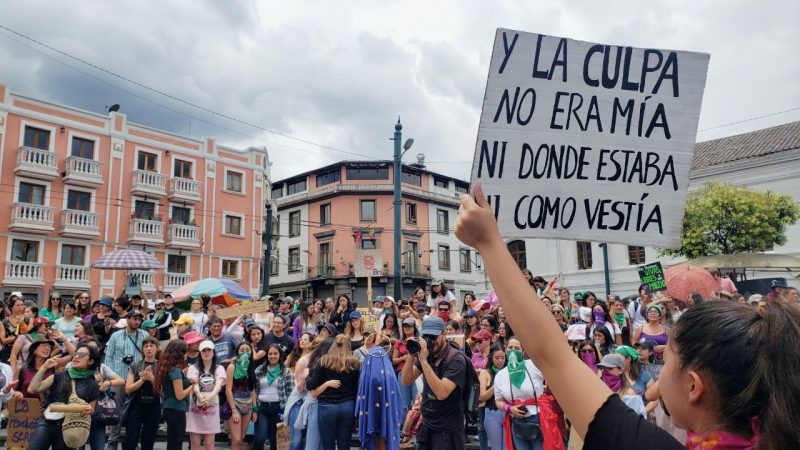 “And the fault was not mine, nor where I was, nor how I was dressed,” on a sign during #8M in Quito, Ecuador, March 8, 2020. Photo by Belén Febres, used with permission.

On 2020's International Women's Day, women around the globe protested for their lives and their rights. World headlines focused on the marches in Latin America, which gathered hundreds of thousands of women—while some estimates point to one million protestors in Santiago, Chile, alone. Women marched against femicide, gender violence, inequality, and voiced their support for abortion rights.

The photos below were taken by members of the Global Voices community.

In Quito, Ecuador, protestors demanded first and foremost an end to violence committed against women. According to Belén Febres, our contributor from Quito, women also marched for more labor rights and wanted people to recognize the variety of feminist currents. They also demanded better environmental protection and thereby protested against extractivist businesses. 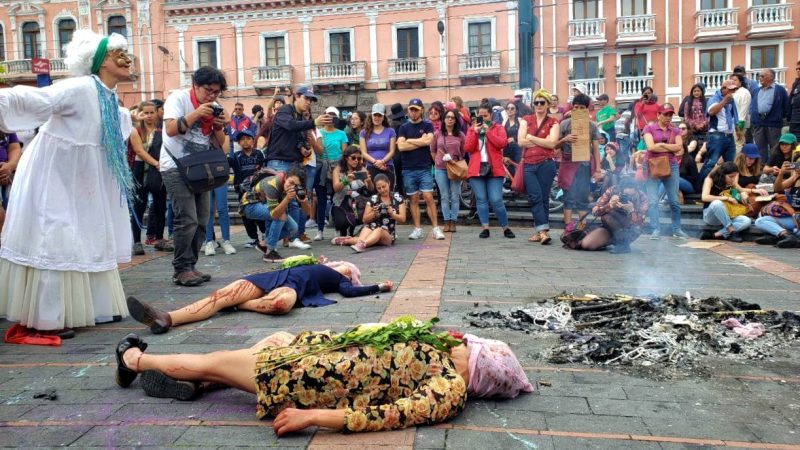 Women in Brazil focused on the country's high femicide rate, abortion rights, transwomen's rights, sexual harassment and, of course—against president Jair Bolsonaro. In the lead up to his election in 2018, women protested under the slogan “not him” (“ele não,” in Portuguese). Recently, Bolsonaro made a sexist remark against an award-winning female journalist as she was facing a smear campaign led by his supporters.

Protesters at 8M also took aim at recent defunding of public policies that aid victims of gender violence, and many paid tribute to Marielle Franco—a black woman, activist and politician who was killed in 2018. To this day authorities haven't resolved her case. 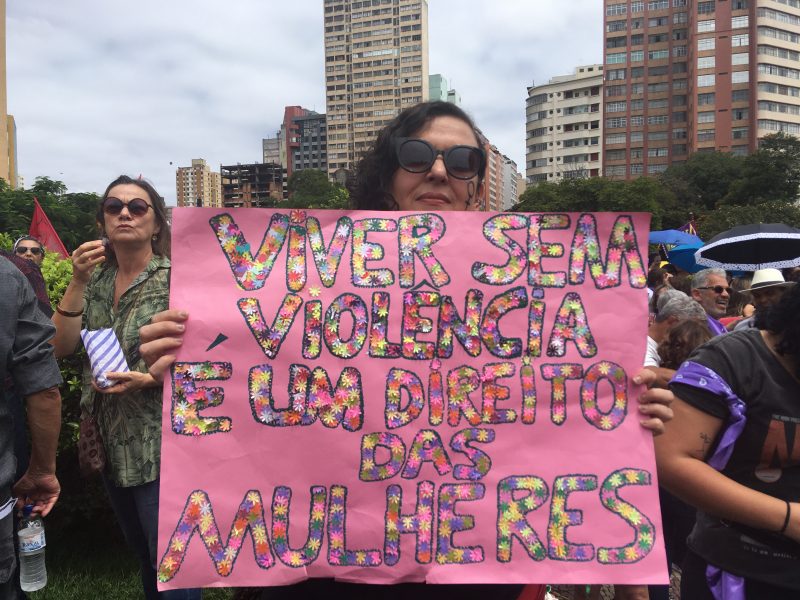 #8M in Belo Horizonte, Brazil. The sign says: “to live without violence is a women's right.” Photo by Fernanda Canofre, used with permission. 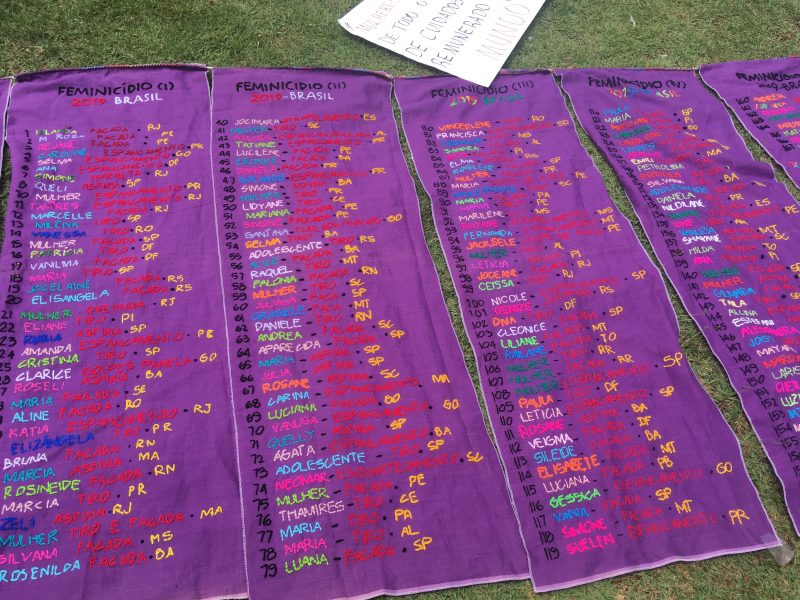 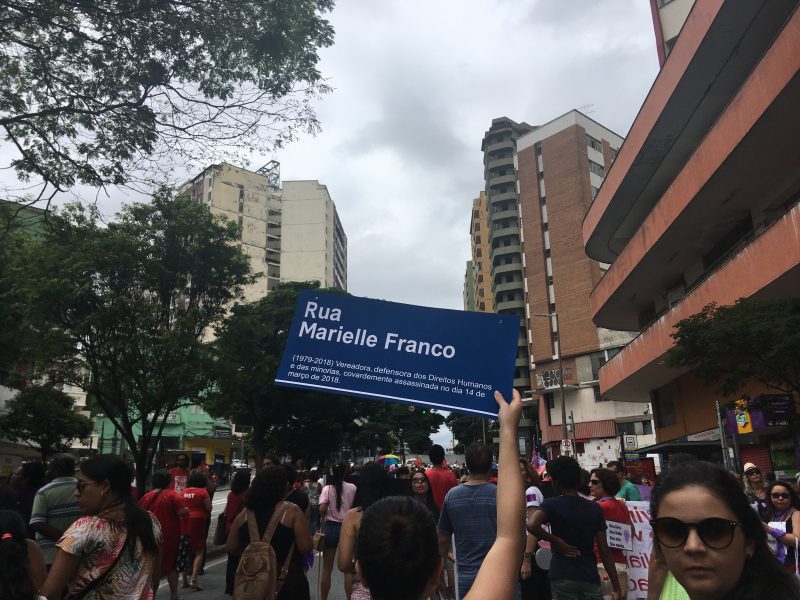 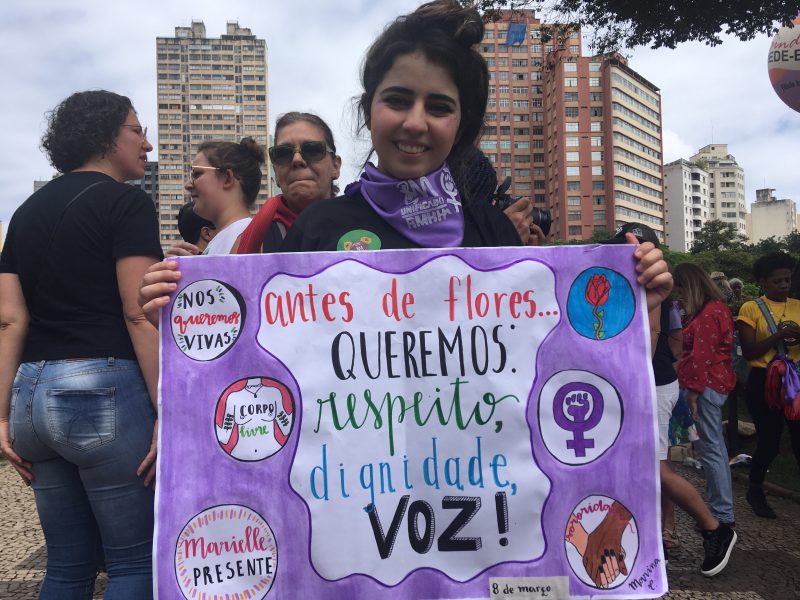 #8M in Belo Horizonte, Brasil. The sign says: “instead of flowers, we want: respect, dignity, voice!” Photo by Fernanda Canofre, used with permission.

In Chile's capital Santiago, over one million women marched the streets on March 8. According to our contributor in Chile, Gabriela Mesones Rojo, women chanted:

We are not afraid anymore, we, women, are a fundamental part of Chile and now they know that we are strong and that we have a voice.

Women also protested for reproductive rights, sexual education in schools, the end of gender violence and impunity, and new constitutional laws that protect women. On April 26 2020, Chile will partake a referendum to decide whether Chile needs a new constitution.

In some areas of the capital, police repressed the march, according to the photographer who took this photo. She said that police shot tear gas and water cannons shortly after this photo was taken near the University of Chile. 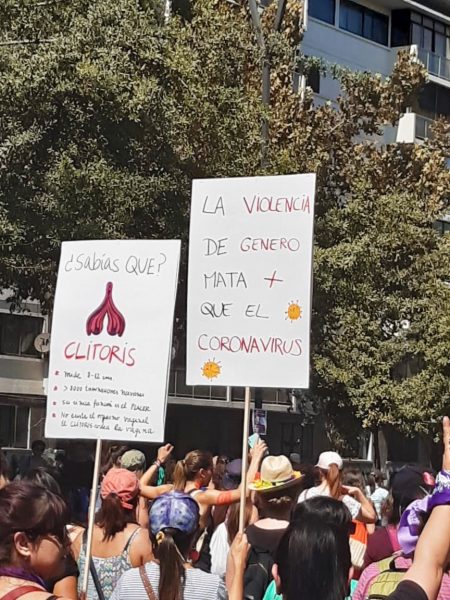 “Gender violence kills more than coronavirus,” #8M in Santiago, Chile, March 8, 2020. Photo submitted by a contributor who wished not to be identified, used with permission. 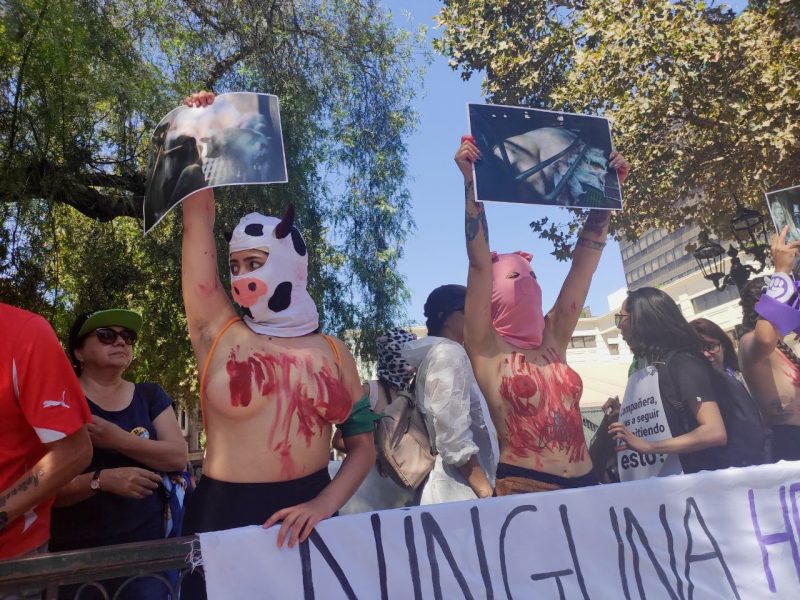 In Guatemala, too, women marched the streets. According to our contributor from Guatemala, who preferred to remain anonymous for safety reasons, women denounced abuses committed by “white and mestizo public figures, but also by indigenous community leaders.” She added that students also denounced abuses committed by staff in universities. She continued:

There is also violence within our social movements, there is also oppression within the fight for human rights. Maya women's bodies are also violated in these activist networks. But we also want to show that we are not alone anymore, that we are organizing ourselves and will continue to denounce abuses.

Protesters also demanded justice for the 56 girls who were burnt to death in the Virgen de la Asuncion Safe House in 2017, where many reports point to the authorities’ negligence.

The sign below reads: “How I wish I was a wall so you would be outraged when they touch me without permission”. 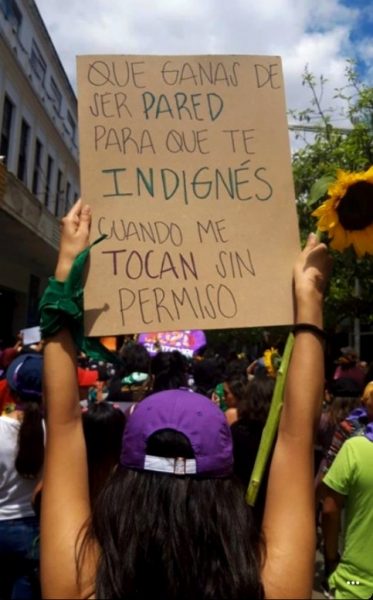 #8M in Guatemala City, Guatemala, March 8 2020. Photo submitted by a contributor who wished not to be identified, used with permission.

In Colombia, many women focused on reproductive rights.

Estella Porras, our contributor from Colombia, says “that the total decriminalization of abortion has been a central demand of the protestors, especially since the issue was on the Court's agenda this past week but did not pass.”

One of the slogans of the #8M march was:

It's not the Church's,
Not the State's
Not the husband's
Not the boss's,
My body is mine, only mine,
My decision is only mine to take. 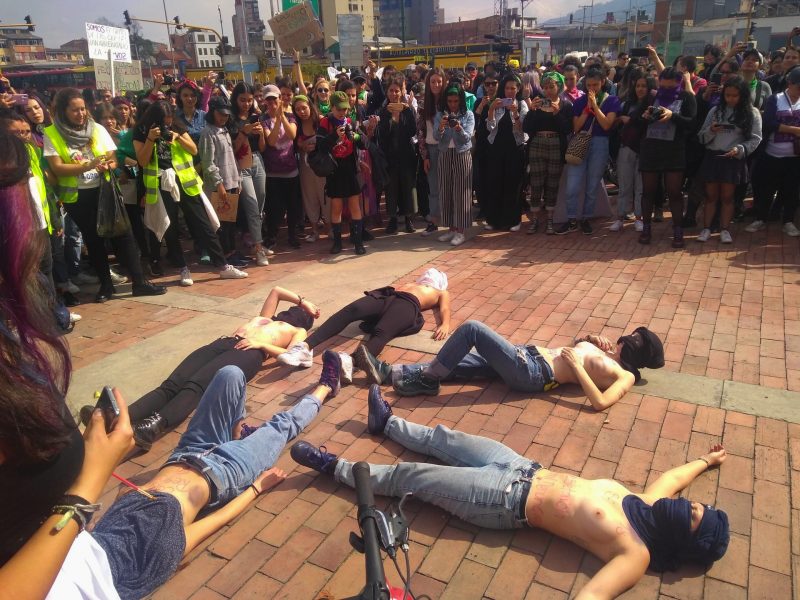 Protestors also marched against the link between gender violence and violence directed at local leaders. Women in general already face a high rate of femicides, and women who are human rights defenders and journalists have compounded risks related to their work.

Women in Mexico protested the country's high rate of femicide and the alleged inaction of the state.

“Tens of thousands of women went to the streets of Mexico to demand justice for the victims of femicide and gender violence, and demand real answers from the government to deal with the urgent situation and danger that women go through in the country,” Giovanna Salazar, our contributor, said.

Official figures point to more than 80,000 women who marched in Mexico City alone. 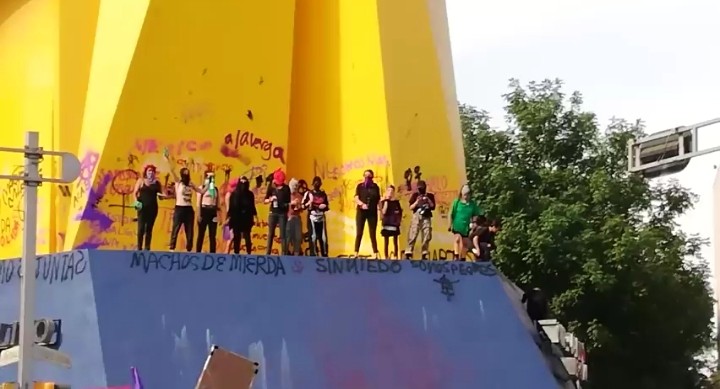 For Anette Eklund, our other contributor from Mexico, some of the biggest refrains were: “Existo porque resisto” (“I exist because I resist”) and “Si no nos mataran seríamos más” (“If they wouldn't be killing us, we would be more”). Indigenous women in Mexico also protested against violence, such as the Otomi women. 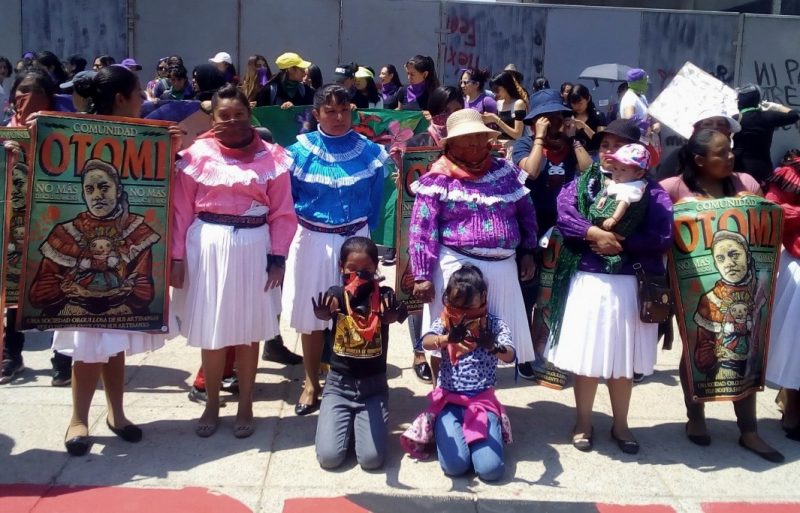 Women in Santa Cruz de la Sierra, Bolivia, met on March 7. The sign in the back reads: “Congratulations Bolivia, we are first in gender violence because of machismo.”

According to Fabiola Gútierrez, our contributor from Bolivia, the largest demands from Bolivian feminists were the legalization of abortion, faster and more efficient judicial procedures in cases of gender violence, sexual education in schools, and non-discrimination of LGBTQ people. 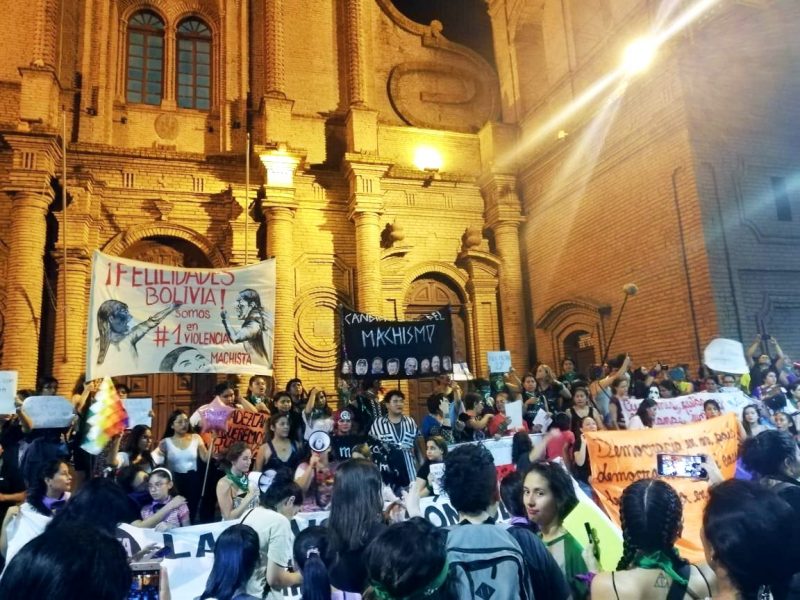 In Brussels, Belgium, Latin American women also showed their support. The sign on the back reads: “In support to the national strike from Brussels #onedaywithoutus.” On March 9, women from Mexico also striked. The sign on the right reads: “A woman who fights. The future of all women is changing.” 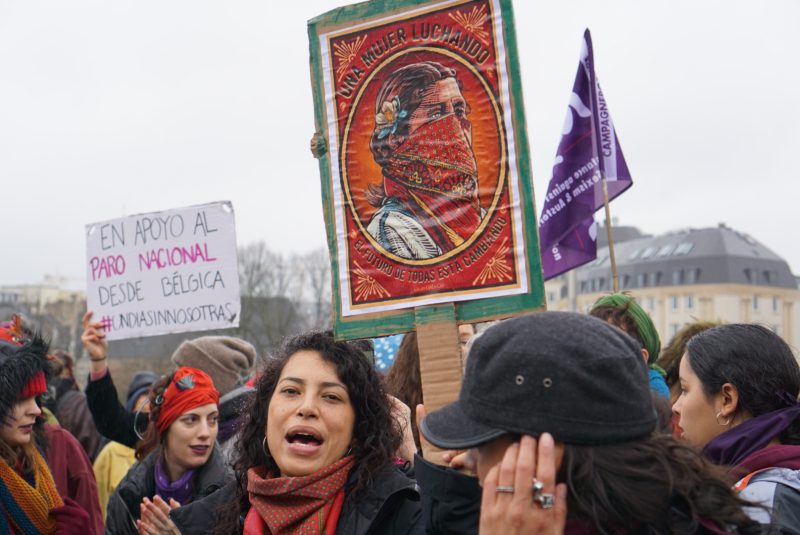 Update: This story was updated on March 10 2020, to add our contributors’ quotes on local demands.