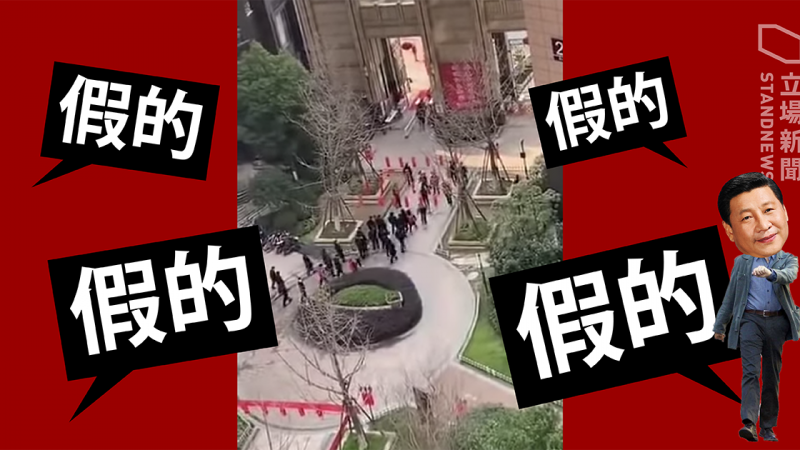 A satirical image from Stand News about how the visit of Chinese Vice Premier Sun Chunlan in a residential district in Wuhan to showcase the success of the government in handling COVID-19 turned out differently after residents shouted “fake, it is all fake” and “it is all [performance]” from their apartment windows.

After telling the rest of the world to recognize China's enormous sacrifice and effort to fight COVID-19, the Chinese Communist Party (CCP) has launched a propaganda campaign urging the Chinese people to thank the leadership of the party.

But instead of showing gratitude, many people expressed anger on social media resulting in the complete removal of all news and comments related to the campaign named “thank-CCP education”.

As official figures on newly infected COVID-19 cases in China continue to drop in the past two weeks, it seems that propaganda authorities could not wait but demonstrate the supposed success of the CCP in leading the fight against the epidemic. However, the political propaganda effort has been questioned by angry citizens who were either quarantined for weeks or witnessed the sudden deaths of their family members, neighbors, and acquaintances.

An example of the propaganda blitz took place on March 5, 2020 when Chinese Vice Premier Sun Chunlan visited a residential district in Wuhan. The visit was organized to showcase the success in the management of a quarantined area. Resident representatives were invited to guide the tour. But during the visit, a number of residents shouted “fake, everything is fake!” and “it is all [performance]” from their apartment windows.

The video soon went viral on social media and even state-affiliated media outlets like People’s Daily and Global Times published the video on their overseas social media accounts such as Facebook and Twitter.

In response to the incident the following day, the city’s new CCP secretary Wang Zhonglin stressed the need to educate citizens on how to be thankful to the party. His briefing in front of city officials was widely reported by local media outlets:

It is necessary to educate people to express their gratitude, they should thank the Party’s General Secretary [Xi Jinping], the CCP, they should obey the Party and follow the Party, they should become a strong positive energy… People in Wuhan are heroic, and they are people who know how to express gratitude.

His talk immediately caused an online uproar. Hong Kong Citizen News picked up a number of typical responses from Webio:

We don’t need to be educated to express gratitude. Such saying is a reflection of your nature of being a slave which was common among officials back in the feudal era.

Wang Zhonglin, you want to say thank to your leader, no one would stop you. But don’t bring residents in Wuhan with you. They are still suffering from the plague and [many] don’t have the mood to kneel down and say long live the emperor with you.

According to a media report quoting from unverified minutes of a meeting organized by the State Council Information Office on March 7, authorities called for the removal of all news stories and commentaries about the “thank CCP education”. In the meeting, Huang Kunming (黄坤明) of the Central Propaganda Department stressed the need for all news units to alleviate people's concerns and be “strategically aligned in their [people's] consciousness”.

Among the censored posts, veteran Chinese journalist Chu Chaoxin’s article was the most popular:

2349 lives and 2349 proclamations of death. Their family, friends, and colleagues are still grieving; their family, friends and they themselves could still be in hospitals suffering from the disease. They don’t even have the strength to properly grieve and now somebody is telling them to learn how to say thank you. This is against humanity.

Wang Zhonglin’s talk is the latest example of the propaganda authority’s narrative to turn the health crisis into a ‘heroic battle’ of the Chinese people under the CCP leadership.

A similar attempt can be seen in the publication of ‘A Battle Against Epidemic: China Combatting Covid-19 in 2020′, a book that highlights “General Secretary Xi Jinping’s commitment to the people, his sense of mission, his far-reaching strategic vision and outstanding leadership as the leader of a major power.”

The book was launched on March 2 soon after the World Health Organization concluded its expert tour and praised China for taking aggressive measures to contain the spread of COVID-19.

On March 4, China state-owned Xinhua News Agency published an opinion piece titled “With Reason on Our Side: the World Should Thank China” (理直气壮，世界应该感谢中国). Below is a major argument of the post (translated by Human Rights in China):

We should now say, with reason on our side, that the United States owes China an apology, and the world owes China a thank you; without the enormous sacrifices and efforts made by China, the world could not have gained a precious window of time to combat the novel coronavirus epidemic; one can say that China has, by its own strength alone, staunchly held off the novel coronavirus epidemic for a very long time. It’s truly earth-shattering, and the gods themselves would be moved!

But such argument has been undermined by the CCP's latest propaganda campaign which has unsuccessfully tried to convince local citizens to show gratitude to the party and the national leadership in handling the COVID-19 crisis.