Both sides declare victory with the final result still pending

A no-confidence motion against Guyana's governing coalition, A Partnership for National Unity/Alliance for Change (APNU+AFC), by the opposition People's Progressive Party (PPP), filed in the country's parliament on December 21, 2018, finally resulted in a general election that took place on March 2, 2020, a year after it was constitutionally due.

Just as controversy plagued the vote of no-confidence, so too has it afflicted the way the results of the election are being handled. Nearly a week after the vote, a clear winner has not emerged, with a March 6 editorial in the Stabroek News, widely considered the country's paper of record, accusing the Guyana Elections Commission (GECOM) of “working in the interest” of the current government and “rigging the 2020 general elections right before our eyes”.

The battle was always going to be fierce because there's a lot at stake. Guyana's recently discovered reserves of oil and gas will effectively be controlled by whichever political party emerges victorious in the election, and the influx of foreign investment from the country's fledgling energy sector stands to transform its economic potential. The International Monetary Fund has projected that the Guyanese economy will grow by 85% this year, with The Economist reporting that by 2024, the country's new-found wealth “could lift income per person from $5,000 to $19,000, nearly the same as in Poland.”

The opposition PPP, reportedly eager to get back into office, has a predominantly East Indian support base comprising about 44 percent of the population; Afro-Guyanese, who mainly vote for the incumbent, number about 30 percent. There was also mounting public dissatisfaction with APNU leader David Granger's administration going into the election and disagreement among the coalition partners that the APNU could ill afford, since the party only holds only a slight parliamentary majority.

Guyana subscribes to a proportional representation system, with the 65 seats in its National Assembly allocated using the Hare quota formula.

After the polls closed at 6 p.m. on Monday, March 2, election observers urged GECOM to announce results in a timely fashion. But in an relatively vast country where votes are still counted manually, the process can be slow; partial results were not expected until Wednesday at the earliest.

By Thursday, March 5, nine of Guyana's ten regions had declared their results: the PPP was in the lead by more than 50,000 votes. The only area left to declare its results was the APNU stronghold of Region 4, which includes the capital, Georgetown, continuing southward to Timehri, along the east bank of the Demerara river, and including the country's second largest town, Linden. 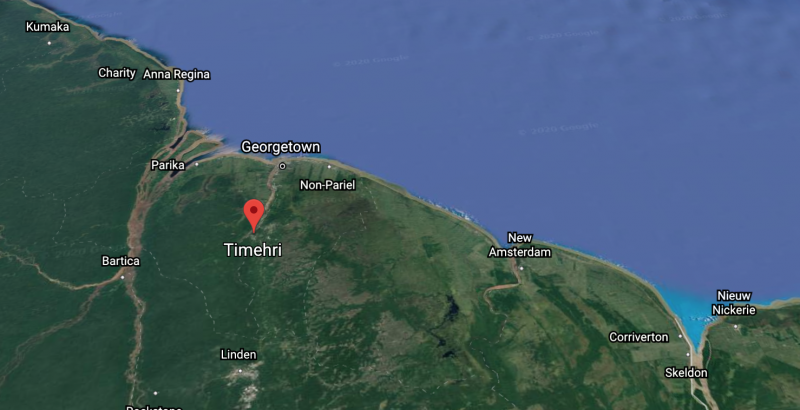 A screenshot from Google Earth showing some of the areas included in the contentious Region 4.

On the heels of reported problems with a spreadsheet (by law, results must be verified according to the official Statements of Poll) and a data entry clerk being found with an unauthorised laptop and flash drive, the PPP was granted a court injunction barring Region 4's returning officer from declaring the results until they could be properly verified.

That same day, the US Ambassador, along with the British and Canadian High Commissioners and the Ambassador of the European Union to the country, released a joint statement questioning the credibility of the Region 4 results that GECOM published, and urging that a proper count be conducted based on the Statement of Polls.

The well-respected Carter Center, which has a long history in Guyana, also said it was “deeply concerned about the events that took place […] at the Office of the Returning Officer for Region 4 and the decision to announce results that had not been verified”. In a preliminary statement about the elections, the Carter Center noted that “the result of the electoral system is a complicated ballot”, and urged the country's political leaders “to commit to reform the ‘winner-takes-all’ election system currently in use”.

Meanwhile, despite international scrutiny and a formal legal challenge of the Region 4 results, both parties have claimed victory.

There are also reports that, contrary to the usual protocol, GECOM had barred local journalists from its command centre from March 5, when the Region 4 debacle began. Since then, protests have broken out over the election results, fuelling rumours and fears of post-election violence in a country with a history of political rivalries rooted in race.

On March 8, a judge will rule on whether or not the High Court has the jurisdiction to hear an application asking that Region 4's votes be tabulated according to the law, prior to the declaration of a final result.

Update, March 8, 2020: Guyana's Acting Chief Justice Roxane George-Wiltshire has ruled that the court does have jurisdiction to hear the Region 4 verification suit. Arguments are scheduled to be heard at 3 p.m. Guyana time (GMT/UTC – 4h) on March 10, 2020.