"We will all forget, but we are all responsible." 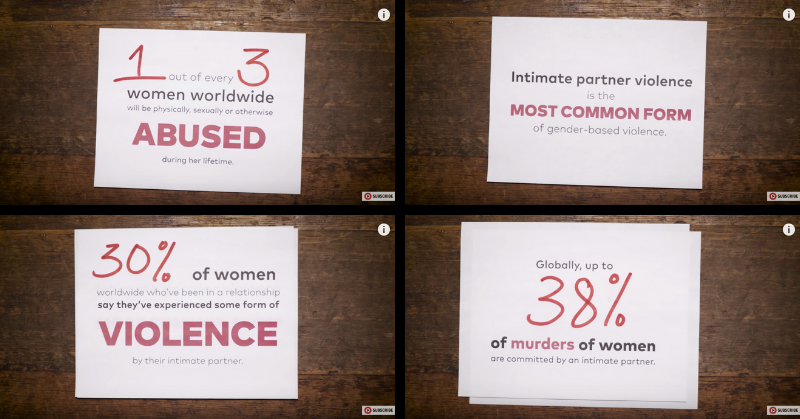 A series of screenshots taken from a YouTube video titled “Gender Based Violence: A Guide To Global Issues”, posted by Global Citizen.

Trinidad and Tobago has long struggled with gender-based violence (GBV). In December 2016, after the body of 20-year-old bank employee Shannon Banfield was found in the warehouse of a variety store in Port of Spain, citizens declared that they had had enough. Yet, the country's first murder for 2017 was that of 16-year-old schoolgirl Rachael Ramkissoon.

Although protests, anti-street harassment campaigns and public remembrances have raised national awareness about gender-based violence(GBV), it continues to happen — with disturbing ripple effects that impact children and youth.

One of the country's most recent cases of GBV involved 31-year-old Naiee Singh, whose estranged husband followed her to work and shot her dead in the parking lot before turning the gun on himself. When his relatives, in a newspaper interview, claimed he had been “pushed over the edge,” social media understandably lashed out against victim-blaming.

However, nearly two weeks later, when it was reported that eight-year-old Mukeisha Maynard — who was initially thought to have autism — was beaten to death by her father Michael who later hanged himself, the initial response was very different.

In a public Facebook post, Zahir Ali, president of the Glimmer of Hope Foundation, who says he had met the little girl, ostensibly as part of his charitable outreach, said:

Autism is something that can lead you into Great Depression. […] Only God knows what parents of autistic children are going through, especially [in this country where] there is absolutely nothing put in place to help the less fortunate parents who can’t afford to pay for the occupational and speech therapy services.

The online narrative soon turned from the violence of the murder/suicide to one in which the focus was the child's disability. It was later reported that Maynard was not autistic, but rather, had speech apraxia, allegedly brought on by injuries sustained during an assault from her father when she was less than a week old. Her mother, Mayso­nia Thomas, was also beaten.

To explore the connection between intimate partner violence and violence against minors — and understand why the response to two equally heinous crimes was so disparate — I contacted Dr. Gabrielle Hosein, head of the Institute for Gender and Development Studies at The University of the West Indies’ St. Augustine campus, who has been actively involved in building region-wide feminist movements and advocating against gender-based violence, for an analysis.

Hosein began our telephone conversation by suggesting that people may have reacted differently to the two murder/suicides because the Singh case was pre-meditated. Despite the restraining order against Singh's ex-husband, he had acquired a handgun and waited at her office with the intention of killing her. The Maynard case, on the other hand, did not seem as calculated.

Hosein agrees, however, that there was a concerning connection between the crimes, and that the link is global, cross-cultural, and cross-racial:

While cultural triggers may be unique to different countries, the roots appear to be fundamentally the same. Data shows that women are often at an increased risk of intimate partner violence when they are pregnant, so according to Hosein, abuse can begin in the womb. “Kids are not incidental to the violence and these are not isolated cases,” she explained. “In fact, children are often physically harmed as part of the demonstration of control. This idea of men ‘owning’ their families is something we need to challenge.”

Since its establishment in 2015, the Children's Authority, charged with the protection of minors in Trinidad and Tobago, has reported investigations of more than 20,000 cases of child abuse. Two days after Maynard's death, chairman of the Children's Authority, Hanif Benjamin, commented that society as a whole had failed her, saying, “Everyone has a part to play in protecting children.”

Given a separate 2011 incident in which Michael May­nard was ar­rest­ed and charged with as­sault­ing Mukeisha (then eight months old) along with her mother, Hosein noted that social services have a critical role to play.

Tracy Hutchinson-Wallace, co-founder of the nongovernmental organisation Autism Spirit, agrees that both social services and wider society failed Mukeisha Maynard. In a telephone interview with Global Voices, she called for both the public and private sectors to do their part to support parents, asking, “Why is it that services that are critical to responsible parenting — health centres, school meetings, therapy sessions — are only available during working hours?”

The other aspect of the narrative that bothers Hutchinson-Wallace is the suggestion that disability is a tragedy: “If an able-bodied child is killed, the perpetrator is a monster. But if the child has a disability? Poor thing, he snapped.” In the Maynard case, she said, “The father showed full remorse. He recognised what he did. His last act was caring for the girl [On realising his daughter was dead, Maynard reportedly dressed her, combed her hair and placed her on a bed before killing himself]. His recompense was that he took his own life. The child did not deserve it. There are so many victims here.”

Hosein believes that the Maynard case is an important one to track to analyse the wider situation and see where social interventions and protocols failed. The father, for instance, had a history of violence, his threats extended beyond the core family unit, and he and his two children lived in poverty, all of which should have been red flags to social service agencies.

Hutchinson-Wallace agrees that finding solutions begins with admitting where processes have failed:

The first step should have been to remove the child from the situation. Authorities need to instill families’ trust regarding how they deal with these issues. Even amidst violence and threats, there is no assurance that something will be done — and this has been the case with successive governments.

She believes that in the short term, more resources need to be put in place for early intervention, and that wider society needs to act more like the proverbial village when it comes to looking out for children.

“Don’t lose sight of the fact [cases like Singh's and Maynard's] will repeat,” Hutchinson-Wallace said:

We will all forget, but we are all responsible. We need to keep speaking out until something is done. It’s a privilege to be a citizen of this country. To deserve that privilege, we are obliged to give back every single day. If you benefitted from something — a good education, a solid family life, strong community support — you have work to do to help others.”

In celebration of International Women’s Day 2020, marked globally on March 8 every year, The University of the West Indies’ Institute for Gender and Development Studies, along with NGOs and corporate sponsors, will host the fourth annual Women’s Rights Rally and March in Port of Spain on March 7, in a continued effort to raise awareness of the plight of women.

In Trinidad and Tobago, there are several services in place to combat violence against women and children. 800-SAVE is a hotline that deals with cases of domestic violence, and the Trinidad and Tobago Police Service have both a Gender-Based Violence Unit and a Child Protection Unit. The Children's Authority registry also has a list of other support organisations. As far as disabilities go, anyone requiring support can reach out to The Immortelle Centre, which will refer the request to the disability organisation most suited to address the need.
Check out Global Voices’ special coverage of gender violence in Latin America.