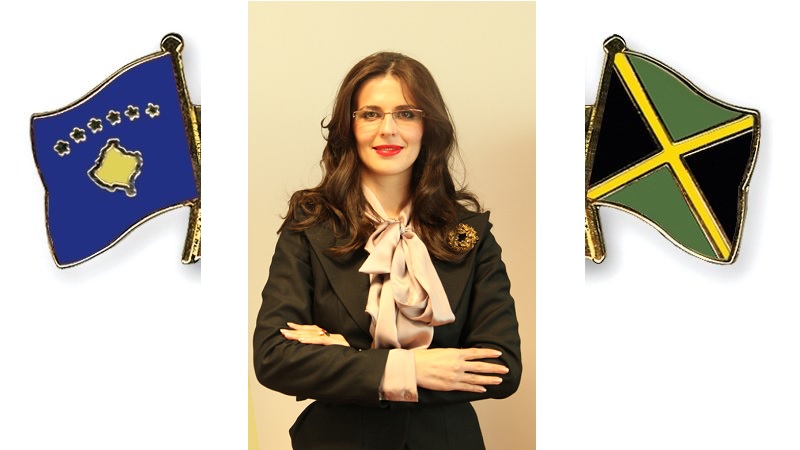 Collage made of image of flags of Kosovo and Jamaica and Wikipedia photo of Kosovo's Ambassador to the United States Vlora Çitaku, who was blamed for the mishap.

This story by Milica Radovanović originally appeared on Meta.mk News Agency, a project of Metamorphosis Foundation. An updated version is published below as part of a content-sharing agreement.

“Jamaica has recognized the independence of Kosovo” – the story echoed widely in the small Balkan nation and the wider region on February 20. After high-profile Kosovar officials, including President Hashim Thaçi, enthusiastically announced the news, the media promptly picked it up. To this day, only about half of the world's countries recognize Kosovo as a sovereign state.

Except that none of it was true. Nine hours after the alleged recognition was reported, Jamaica's Foreign Minister Kamina Johnson-Smith denied it.

To date, Jamaica has not recognized Kosovo as an independent state. https://t.co/HLNtJaOWLh

Kosovo's presidential office pointed fingers at the country's ambassador to the United States, Vlora Çitaku, who allegedly notified officials at home about a Jamaican resolution on February 19. Foreign Minister Glauk Konjufca endorsed this account via his social networks, adding that Çitaku had sent this information by email.

On March 4, Konjufca requested the president of Kosovo to call back seven ambassadors, including Çitaku, for reasons allegedly unrelated to the scandal.

Çitaku tweeted about her dismissal from the U.S. mission, but hasn't yet publicly commented on the Jamaica issue.

The number of countries that recognize the independence of Kosovo is a contentious issue. Pristina claims it is 116 countries, while Belgrade says the figure is lower. In recent years, Belgrade has actively lobbied to dissuade countries from recognizing Kosovo as a sovereign state. Some countries that had done it in the past have recently retreated, such as Ghana and Sierra Leone.

While analysts such as Shpetim Gashi blamed the Jamaica gaffe on Kosovo's “immature foreign policy,” others are asking whether the media was also responsible.

Speaking with Metamorphosis, Maja Zivanovic, a journalist with the Balkan Investigative Reporting Network (BIRN), argues that journalists should have verified Thaçi’s allegations before reporting them — such as by asking the government for an official document or checking with Jamaica's authorities.

She adds that while there's a lot of discussion about fake news in the Balkans, they rarely address the problem that, at times, the sources of misinformation are the authorities themselves. She says:

Any announcement of a politician on social networks, precisely because of that culture to make statements and claims without any restraints, should be published with certain reservations, [for example] by clearly stating who stands behind the claim in question. It should also, whenever possible, to fact-check the information, especially when it comes to claims that were previously subject of dispute or disagreements, but also to information of great public importance, such as this one.

In addition, she says, it is essential for journalists to be able to recognize fake profiles on social media, as some of which are created with the specific purpose of spreading misinformation.

She recalled the recent case of the alleged death of convicted war criminal Ratko Mladić, who is currently serving a life sentence for war crimes committed by Bosnian-Serb forces under his command during the Bosnian War. An Italian journalist deliberately shared the fabricated news on Twitter through a profile impersonating a Bosnian politician, and Balkan media massively reported it as if it were true.

Just spoke to the press officer at the MICT (transition body for Yugoslav Tribunal). Can confirm Bosnian-Serb war criminal Ratko Mladić is definitely NOT dead (a background if you’re not familiar with his name https://t.co/b88RK36YFb) #Mladic

It took fact-checkers around 30 minutes to debunk the fake claim about Mladić's death. Ms Zivanovic continues:

Basically, what needs to be done is to review the source's previous posts to determine whether they're credible. Usually at this point you're able to sniff a potential trap. BIRN’s journalists often try to contact the owner of the profile through private messages and at the same time to contact all the persons to whom the information applies as well as to try to get confirmation from other parties.

Most Kosovo officials haven't deleted their erroneous statements about Jamaica's recognition — except for former Foreign Minister Behgjet Pacolli, who deleted it and then tweeted: “In any case, thank you.”

Thank you Jamaica in any case, thank you Minister @kaminajsmith , thank you USA,@RepEliotEngel
Kosovo and Kosovars will remain forever trusted friends of the government and people of Jamaica pic.twitter.com/GEJdc2hFUi