An interview with sociologist Petru Negură on Moldova's demographic decline 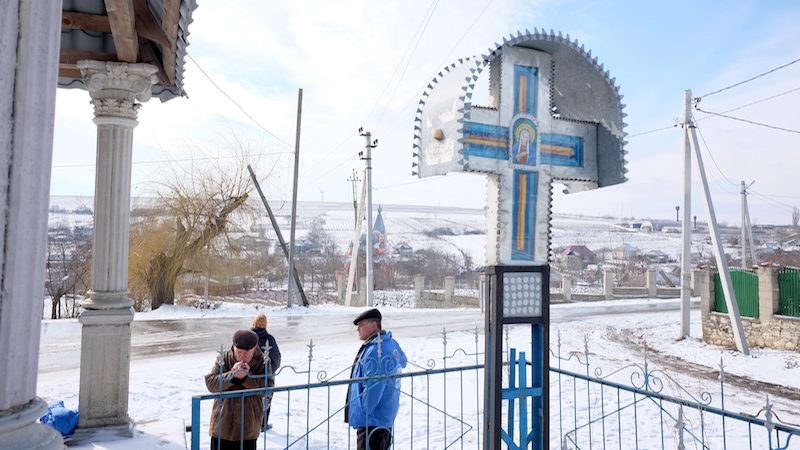 “Officially, around five hundred people live here,” said the Președinte of the electoral commission in Orac, a small village in northern Moldova during parliamentary elections on a frosty morning in February 2019. “But even with a 100 percent turnout, we wouldn't see more than 300 of them today.”

Half an hour later, a funeral procession passed by.

Such scenes are commonplace in rural Moldova. Emptied villages now feature in almost every depiction of the country; in 2019, the country's plummeting population decline even made the front page of the New York Times. The latest census, taken in 2014, recorded a population of 2,998,235 — a decline of 11 per cent compared to the previous census in 2004. International and local researchers have made dispiriting predictions: according to UN projections from 2018, Moldova has the third fastest shrinking population on the planet. Moldovan demographers such as Olga Gagauz concur, and predict a 19 percent decline in the population by 2035.

These outcomes are driven in part by endemic poverty and corruption which push the country's youth abroad, primarily to the European Union which lies on Moldova's doorstep. Like many of its neighbours in eastern Europe, Moldova's ageing population is also blighted by a high mortality rate and poor living standards, particularly outside major cities. The social and political repercussions are many, and they are potentially quite severe. With prolonged brain drain, how can a state staff its ministries or run its schools, hospitals, and social services? When more families depend on remittances from abroad, how vulnerable does a country become to shocks in overseas labour markets? And last but not least, what does mass emigration do to the social contract and citizens’ trust that their state can ever offer a better future?

During a recent visit to the Moldovan capital Chișinău, I spoke to Petru Negură, a sociologist and professor at the International University of Moldova, about the consequences of the country's demographic crisis.

Maxim Edwards: Where do Moldovans go to seek a better life? And how do they choose their destination?

Petru Negură: Depopulation can be stratified in many different ways. There is the migration of poor people from the most rural areas, mostly to Eurasia: Russia, Ukraine, and so on. Those who are a bit better endowed economically and with other forms of capital would rather go to Europe: to France, Spain, and Germany. It's important to note that there is more male emigration to Moscow and other Russian cities, working on construction sites and so on, whereas there are more women than men in Italy and other EU countries, where they perform domestic labour.

I would say that those who opt for this survival strategy are not the poorest: in order to migrate and be capable of meeting the ordinary challenges related to migration, you have to have at least a small amount of money or assistance. Some people can't even afford to emigrate, and don't have a very big social support network such as relatives to can help them.

ME: These days, the global super-rich can easily obtain multiple citizenships. But in Moldova, that option is open to the poor: there are many overlapping nationalist claims on the country's complex history. Ordinary people can claim multiple citizenships based on place of residence or ethnicity. How is this tendency understood?

PN: In a way, some see it as a devaluing of Moldovan nationality. There is a discourse among the educated classes that Moldova is a failed state because so many people are trying to get foreign citizenship. But from a legal point of view, the many Moldovans who have Romanian passports can simply be counted as Romanians who are returning to their home country, rather than leaving Moldova behind. Moreover, most Moldovans who get Romanian citizenship do not target Romania as their destination, but countries further West like Italy, Spain, or Germany.

ME: How do Moldovans make sense of depopulation and mass emigration? How does that differ from foreigners’ depictions?

PN: I don't want to generalise too much, but Russian-speaking journalists and intellectuals tend to see the high number of Moldovans working in Russia as a reason for why the country should reorient itself towards Moscow. At the same time, pro-Romanian and pro-western intellectuals cite Moldovans’ emigration to western countries as proof that we are looking for our model of development in the West — even though, statistically speaking, more go to Russia than western countries.

For foreign media, depopulated villages are the most revealing image. They in particular are interpreted as a kind of social tragedy and political failure, even though medium-sized towns are depopulating, too. This discourse around emptying villages started a long time ago in Moldova, particularly during perestroika when there were worries about rural areas losing their “authentic” traditional lifestyle. Rural depopulation, after all, started with urbanisation during the Soviet period. And remember that Moldova has one of the highest percentages of rural population in this part of the world: around 55% of Moldovans live on the land. In Romania, one of the most rural countries in the EU, it's 45%. With such a strong urban-rural divide, ongoing urbanisation is understandable. But many people explain it with the collapse of the Soviet Union and death of collective farms, even though successful farms today wouldn't require as many people. In the Soviet era, Moldova was one of the most rural Soviet republics with the most intense urbanisation trend.

ME: How does this public debate impact the need for an accurate census? Are there any accurate statistics?

PN: The last census, from 2014, is known as the least accurate census in Moldovan history. The results were published three years after the census was conducted, with some quite visible errors. Against this background, many say that the census inflated the number of residents of Moldova. There is a need for a more accurate census, but there are also demographic surveys conducted with big sample groups which do allow us to estimate the number of residents. Those show a clear decline and allow us to make pessimistic predictions.

ME: Even Moldovans who emigrate for good don't seem apathetic towards politics back home. After all, the diaspora represents a lot of voters, and even has reserved seats in parliament. What does the rest of Moldovan society make of that? Is there resentment?

PN: Within the political elite there is resentment. Among the [former ruling] Democratic Party in particular, because they don't have very strong support from the diaspora. The western diaspora, or at least 90% of them, tend to support [ACUM opposition leader] Maia Sandu. In Russia they tended to support [PSRM politician and president Igor] Dodon. So usually when pro-Western intellectuals say that we have to give more rights to our diaspora and see Moldovans overseas as an asset, they usually only mean the western diaspora, not those in Russia and the former Soviet Union.

But yes, in general there is quite a prominent discourse in society which says to emigres: “You fled for a better life and abandoned your country, you don't have the legitimacy to criticise us or present any solutions to our crises. Come back first, then you can solve things.”

ME: When reporting on elections in Moldova, I have heard on several occasions that the issue of parliamentary representation and number of polling stations for the diaspora is highly politicised…

PN: Absolutely. But there is another side of the story, and I must be subjective here: the western diaspora tends to be much more politically and civically active than the Russian. This is also related to the social background of those who go to Russia compared to Moldovans in the West. But even then, Moldovan migrants doing domestic labour in Italy often had a higher education in Moldova — they were teachers or even doctors. So their emigration represents an obvious downwards social mobility as much as it does financial advantages. If you look at the profession people had in Moldova and that which they have abroad, whether in Russia or the EU, the dissonance is quite obvious. It's about status.

ME: In several eastern European states, conservative and far right “solutions” to demographic decline have been proposed. These range from state support for larger families to the banning of abortion or LGBT rights. Is anything similar underway in Moldova?

PN: I think most Moldovans blame the government, rather than any minority groups. And I'd stress that many of them blame the fall of the Soviet Union; they try to explain what's happened here, the poverty which followed the fall of the Soviet Union, with the fact that the union disappeared. They weren't completely wrong, in that a whole system ended and another one arose, or failed to arise. In the 1990s and 2000s, many blamed the nationalist intelligentsia and their demands, given that the collapse happened after the rise of perestroika.

But you're right, here in Moldova as well, there is nevertheless a conservative and ultra-conservative discourse that puts the blame on feminism and LGBT rights for the current demographic crisis, although the main demographic concern should be the emigration of the most active Moldovan people and not the “crisis of the traditional values.”

ME: Meanwhile, Moldova's high emigration is accompanied by very low immigration. Could immigration be a solution?

PN: Moldovans, like other eastern Europeans, are quite opposed to that. It has been used in electoral campaigning, for example in 2016 when supporters of Dodon suggested that Maia Sandu would let thousands of Syrian refugees settle the country. I've tried to discuss it with people, inviting them to explore all possible solutions. Even students, who have travelled more than other generations, are quite reluctant to consider it. They don't see it as an option.

Similarly, internal migration to repopulate emptying areas doesn't seem popular. I've spent a lot of time working on homelessness in Moldova, and once asked some homeless people in Chișinău why they didn't move to villages, where there are at least empty houses. And they asked me “what could I find there? I need to make a living, not just find a roof over my head.”

ME: Several Moldovan governments have tried to encourage emigres to return, with mixed success. Is return migration a false hope?

PN: Yes, but false hope for whom? You often hear stories about people who returned from abroad and weren't able to run a successful business here, because of obstacles in bureaucracy and so on. I studied France and I also had Canadian permanent residence, but I decided to come back. I feel that my vocation is to be here and try and do something. But it hasn't always been easy. I'm soon moving to Germany for a research fellowship, but still strongly feel that one can help his or her country from abroad.

So this is also part of the story: people return but don't find a place for themselves immediately. Or they need to carve out a place for themselves. People here in Moldova are often quite surprised when you come back, that things don't always work out abroad. In short, they don't expect people who leave to ever come back.