Young Moldovans may be emigrating en masse, but they're not apathetic 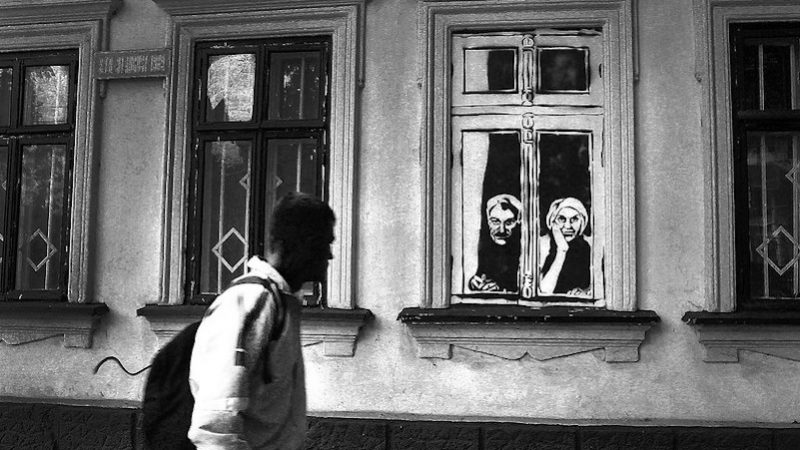 A man walks past a painting of anxiously waiting parents in Moldova's capital Chișinău, 2014. Photo: Misha_Tokyo / Flickr. CC BY 2.0

The Republic of Moldova is blessed with a mild climate, bucolic landscapes, popular wine, and empty villages. Moldovans are leaving en masse; their country now has one of the fastest shrinking populations in the world. Poverty, constant political upheaval, and deeply embedded corruption have convinced many to buy a one-way ticket. Some become seasonal economic migrants, returning for a few months every year. Others, many of them highly educated, prefer to leave for good. According to a UNFPA study from 2016, if no effective measures are taken by Moldova's government to improve the quality of life, in 15 years the country's population, estimated at just under three million, could decline by 24 per cent.

It's hard to establish the precise number of Moldovans living and working abroad. The National Bureau of Statistics estimates around 800,000 but the number could be as high as two million when counting those who left the country using another other passports. Moldova recognises multiple citizenships, and many Moldovan citizens can claim an EU passport from neighbouring Romania (both countries were united between 1918 and 1940.)

Almost 80% of those who emigrate are between 18 and 35 years old, increasing pressure on the local economy as the working-age population declines. According to the World Bank, 40% of those who migrate have a higher education, contributing to the country's “brain drain.” Much like the country's geopolitical situation, Moldovans’ migration preferences are divided between East and West; 80% of Moldovan migrants are concentrated in three states: the Russian Federation, Italy, and Portugal.

In light of recent political changes, now is a good time to consider the effects of this mass emigration on Moldova's domestic politics. Are young Moldovans abroad still committed to fighting for a better future in a country they have left behind? Was emigration for them a sign of resignation in hope of change at home? And does the emigration of the youth rob the country of its chances to push out a discredited elite and achieve lasting change? I spoke to several Moldovans living overseas to understand their perspectives.

“I am sometimes a bit jealous of these young people in the West who were never confronted with the idea of leaving their countries because they didn't have any future there… I guess it's difficult for them to understand us,” says Ana (pseudonym), a 33-year-old Moldovan citizen who has spent the last decade of her life in Greece.

Ever since losing her mother to cancer at the age of nine, Ana dreamed of becoming a doctor. Years of hard study paid off when she was admitted to the College of Medicine in Chișinău, the Moldovan capital. “I was used to hardship, so didn't expect this new stage to be easy,” recalls Ana, whose two younger siblings remained in her home village. “I still had to take care of them, as my Dad had left for Moscow to support us. I used to work as a nurse for a while, but with a salary of 2,000 Lei (about €100), it was impossible to save anything. So I decided to go abroad.”

Ana's decision to emigrate came several years before Moldova secured a visa-free regime with the EU in 2014. “Getting a work visa for a western country was a hassle, and there were fewer agencies dealing with this sort of issue compared to today. I considered myself extremely fortunate when I got a summer job in Greece. I wasn't doing anything related to my studies but I was paid much more than when I was a nurse in Moldova, so I decided to stay longer and save more. I knew I would become an illegal immigrant but, at that point, I couldn't see any chance of survival back home. Neither do I now, 13 years later,” concludes Ana with a sad smile.

This grim outlook, widely shared among Moldovan emigres, has repercussions for their country's electoral politics. According to Denis Cenusa, a political science researcher at the Justus-Liebig-Univerität in Giessen, Germany, “emigration is ageing both the labour force and the pool of voters. Consequently, the political choices and the electoral behaviour of the older voters shows more reluctance towards progressive views and politicians. Moreover, the growing emigration of the youth affects the political activism of the remaining young population, which concentrates its efforts to a search for opportunities abroad rather than improving the situation at home through higher civic or political activism or participation.”

Vadim Pistrinciuc, a public policy expert at the Chișinău-based Institute for Strategic Initiatives, agrees: “the fact that most young people migrate, and that the Moldovan diaspora is composed of active, working people, creates a deficit of votes for parties pledging European values, anti-corruption, and engaged economic policies. Thus newly emerged parties struggle much more to get their ideas taken by society. It would be much easier for young politicians and parties to get their ideas heard and voted for if more young people remained in the country… Left-wing, social populism is more easily sold to the ‘remaining’ ageing population,” explained Pistrinciuc, who until last year was also a parliamentarian from the Liberal Democratic Party.

Nevertheless, some young people have decided to remain, or even return, to fight for a Moldova with better prospects. Twenty-six-year old Dorin Frăsâneanu is one of them.

“When I left, I didn’t want to come back. But, in time, I learned to never say never,” begins Frăsâneanu, who first left Moldova ten years ago to study in the UK on an HMC scholarship, before studying in France and Russia. His travels put him in contact with members of Moldova's large diaspora, particularly in Russia and Israel. “I heard many horrible stories,” remembers Dorin, who decided in Christmas 2018 that he wanted to do something to change them. Frăsâneanu eventually briefly returned to Moldova to run as a candidate for the pro-European opposition bloc ACUM in the February 2019 parliamentary elections. Dorin run as a candidate in Constituency 51, representing citizens living in countries due East of Moldova (the country's parliament includes three such seats, reserved for the diaspora). He eventually took 27.15% of the vote, coming second after Gheorghii Para, candidate of the pro-Russian Socialist Party (PSRM).

Torn by the sense of letting his constituents down by not winning the election, Dorin does not regret fighting in their name. The experience simply made him more curious about returning to Moldova one day, in order to work in public service. He says he'd just be cautious about the circumstances.

The circumstances changed shortly after that election when the ACUM and PSRM parties unexpectedly voted together to kick out the unpopular ruling Democratic Party of Moldova (DPM). They formed a ruling coalition under Maia Sandu, who declared as prime minister that Moldova's biggest challenge was that “people don't believe in this country and leave.” Accordingly, Sandu's government attempted to attract members of the diaspora back to public service in Moldova. In November 2019, the pro-European government led by Maia Sandu was dismissed on a no-confidence motion initiated by the PSRM over a failure to implement judicial reform. The current government, formed mostly of former advisors to President Igor Dodon, is now gearing up for his bid for reelection in 2020. As he did in the 2016 presidential elections, Dodon will most likely face Maia Sandu who came second with 47.82% of the overall vote but with a distinct majority among the Moldovan diaspora, excluding Russia.

“The diaspora could provide the deciding votes in the 2020 presidential elections. This group of the electorate is more important to the opposition than to the ruling party, which uses public investments to persuade voters at home,” explains Cenusa. “For the 2020 presidential elections, the ruling party may try to stimulate political activity among Moldovan working migrants in Russia to counterbalance the votes supplied by the diaspora in the West.” he elaborates.

It remains to be seen whether these overtures to Moldovans overseas will pay off. What is certain is that they can only grow in importance if the country's trend of youth emigration continues.

Accordingly, Pistrinciuc stresses that the youth still play an important role in Moldovan politics, wherever they may be. “They are the door-knockers; they are very visible online, particularly on social media and new media outlets, where they make waves. They also send messages urging their parents and grandparents to vote, which was quite visible in recent elections when pro-European parties or candidates won important regions or localities which nobody expected… Today's parliament is much younger than the previous one, showing that voters want the youth to be part of the political process. They want something new,” he concludes.

“People have become tired of the political situation,” summarises Dorin. “The continuous postponement of reforms makes it very difficult for people to trust politicians. There was an optimistic moment [last year] when the government of the oligarch [Vlad] Plahotniuc was replaced, but then… what happened next was disappointing. I choose to remain optimistic. I think,” he adds with a cryptic smile.

In contrast, Ana is reluctant to speak much about politics. Even though she has never met Dorin and their life trajectories could not have been more different, she shares his concerns. “I follow the news but, to be honest, I care much less than before. [Politicians] do whatever they want over there. I would like to come back to Moldova one day; I am deeply homesick but I don't want my children to grow up in a corrupt country which doesn't care about its people,” she declares.