Caribbean tourism threatened by the region's first cases of COVID-19 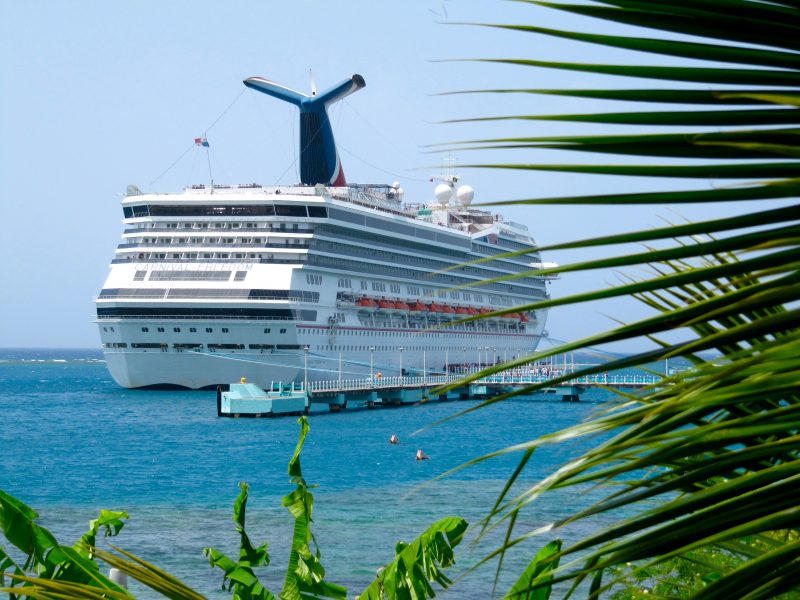 A Carnival cruise ship docked at the Jamaican resort town of Ocho Rios in 2018. Photo by Emma Lewis, used with permission.

As anxiety grows over the spread of COVID-19 outside China, the Caribbean region is becoming increasingly nervous. As of March 3, 2020, three cases of the coronavirus have been confirmed in St. Martin and St. Barthélémy, and another in the Dominican Republic — small nations that remain vigilant as authorities fine-tune already existing response measures.

There are concerns, however, that some island territories are ill-equipped to deal with an outbreak on the scale of COVID-19. As at the time of publishing, there were 95,079 known global cases, with 51,432 recoveries and 3,249 deaths, but the figures are constantly changing.

On Twitter, journalist Jacqueline Charles, who reports for the Miami Herald, wondered whether Haiti could cope with the fallout should the virus spread across the border from the Dominican Republic:

The arrival of the #coronavirus in the #DominicanRepublic — a Caribbean nation of 11 million that shares a border with #Haiti — opens up a new front in the fight to contain the virus. https://t.co/mp5MTDTxth

The effects of the COVID-19 pandemic are not limited to the health sector; despite the silver lining of massively reduced carbon emissions from China since the lockdown over the illness, there have also been negative repercussions for international trade, travel and the global economy.

On February 28, the Caribbean Public Health Agency (CARPHA) upgraded its coronavirus risk for the Caribbean from moderate to high, urging health authorities of CARPHA member states to shift their mindset from preparedness to readiness and rapid response and continue to do everything necessary to strengthen their capacity to respond to the possible importation of cases. Member states were also encouraged to increase their surveillance capacity and urgently adapt national pandemic preparedness plans to deal with COVID-19.

Meanwhile, the Caribbean Community (CARICOM), which represents 15 member states and five associate member states, had planned a special emergency meeting in Barbados to discuss a regional strategy, but since the confirmation of the three COVID-19 cases, a virtual meeting took place instead. During the session, which was streamed live on Facebook on March 1, CARICOM Chair and Prime Minister of Barbados Mia Mottley announced a regional protocol to handle the virus, following advice from two earlier meetings among regional health officials.

The Caribbean cruise industry experienced a boom year in 2019. In Jamaica, cruise ship passengers made up over 1.5 million of the 4.3 million visitors to the island, but now the industry is beginning to struggle with the fallout from COVID-19. Jamaica's Ministry of Tourism has reportedly downgraded its projected earnings.

Several cruise ships have either been delayed in ports or turned away altogether, because of concerns over passengers showing symptoms that could be associated with the virus. In other cases, passengers from “high-risk” countries have not been allowed to disembark.

On March 4, a cruise ship carrying hundreds of passengers who boarded in St. Martin (where at least one case has been confirmed) was allowed to dock at Port Royal — a port near Kingston, which received its first cruise ship with much fanfare back in January. News reports are hinting at some developing tension between the country's health and tourism ministries over the issue, with Minister of Health Christopher Tufton stressing in a radio interview that the government “will not take any unnecessary risks”.

There is so much at stake for the cruise line industry that representatives attended the March 1 CARICOM meeting to help ensure that the agreed protocols embraced security and health concerns, and that there would be structures in place to facilitate proper communication between regional governments and cruise operators.

Some cruise lines, however, are beginning to push back against the interim regulations imposed by Caribbean governments. MSC Cruises, which had a ship turned away from both Jamaica and the Cayman Islands, finally docked in Mexico, where President Andrés Manuel López Obrador commented: “We cannot act with discrimination.” Passengers turned out to have simply had the flu.

Jamaica’s tough stance on cruise ships has also upset operators like Carnival Cruises, who withdrew stops in Jamaica and the Cayman Islands over the past week.

However, many social media users agree that the restrictions are warranted under the current circumstances, as public health comes first:

And when they bring the virus to the island who is going to help when it spreads. The healthcare system cannot manage an outbreak and deaths. Tourism money is good but not if its going to be a health devastation to the citizens.

The nerves continue. Another Jamaican tweeted:

The coronavirus has the world at a standstill. Jamaica cannot handle it. It’s not if it will breach our borders, it’s when. Our people and economy will get hard hits. It’s so terrifying. ?

Given the situation, Caribbean Airlines, the main regional carrier, is also reviewing its health and safety measures. In Trinidad and Tobago for instance, passengers from flights originating in countries with confirmed cases of COVID-19 have reported having to pass through an infrared scanner before being allowed to enter the country.

Caribbean citizens have begun, somewhat reluctantly, to limit social contact and avoid the customary hugs or kisses of greeting between friends and family, and handshakes between colleagues and business associates. Well-known Jamaican broadcaster Fae Ellington declared:

Listen nuh, please don't insist on shaking my hand, hugging me or kissing me. Putting all those greetings on hold ‘until such time’.
This isn't a joke. #Preventionbetterthancure

Meanwhile, the overall economic impact on small island economies remains to be seen. Despite assertions by Jamaica’s Minister of Finance, Nigel Clarke, that there were no cancellations of tourist bookings from the United States (which represents approximately 75 percent of Jamaican visitors), Minister of Tourism Edmund Bartlett, did not appear sanguine in a radio interview towards the end of February. Private sector representatives — who are expecting price rises — also do not appear confident. The many small businesses and attractions on the ground that depend on cruise ship business are particularly anxious, with one noting that the major losers “are the people of Jamaica, the taxi drivers, the vendors”.

One Jamaican Twitter user expressed anxiety over COVID-19's potential impact on tourism, a major earner of foreign exchange for the island:

Those who consistently criticize & demonize the tourism industry are going to get a rude lesson in reality. Only a matter of time before this COVID-19 puts a damper on things and Americans drastically reduce their overseas travel. Then the naysayers will see the industry’s value.

So the government and @themohwgovjm should be commended for their work RE: C19 so far. But what steps are being taken regarding insulation from from any economic fallout that may affect us?

As the Caribbean braces itself for additional cases of COVID-19, however, economic impacts are not the priority. The region is not taking any chances with the illness, which has, thus far, already claimed thousands of lives across the globe.