"Stained by terrorists, butchered by bandits, abandoned by government." 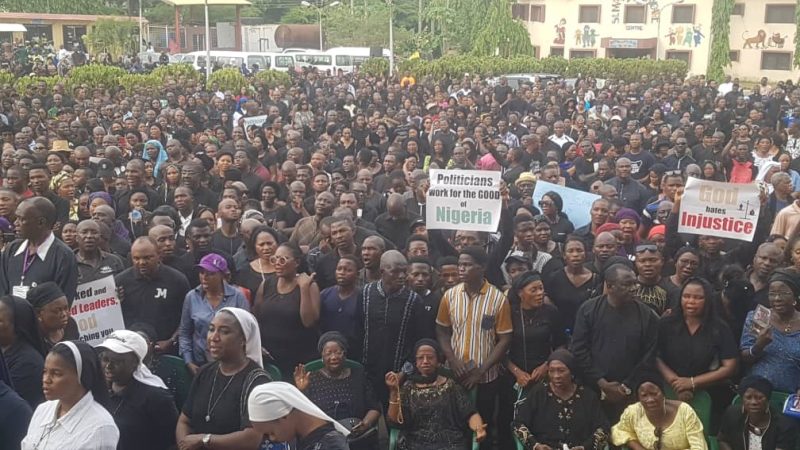 Screenshot from SaharaReporters of Nigerians dressed in black on a street protest.

On Wednesday, February 26, many Nigerians dressed in black as “a sign of mourning and solidarity with the victims of kidnapping and other violent crimes in the country,” reports Legit, an online news portal.

The national mourning was complemented with street protests on March 1, by Catholics in Abuja, Nigeria's capital, the BBC reported. There was a similar protest in Sokoto, northwestern Nigeria, on February 26.

On Wednesday, 26 Feb 2020, the Catholic Diocese of Sokoto in NW #Nigeria, led by Bishop Matthew Hassan Kukah of @KukahCentre, marched in memory of all the victims of #Nigeria‘s killing fields.#NigeriaMourns pic.twitter.com/ywtytEGnXn

Although #BlackWednesday was initiated by the Catholic Church as part of Ash Wednesday, civil society groups and netizens also participated in the black attire symbolic protest.

It has been a death too many in the past few months in Nigeria, Africa's most populous nation.

Since 2011, Boko Haram attacks in Nigeria have resulted in 37,500 deaths, 2.5 million displaced people and nearly 244,000 Nigerian refugees, according to the Council of Foreign Relations’ 2020 Global Conflict Tracker.

Enough is Enough, a civil society movement in Nigeria, tweeted that the government should “live up to its responsibility of protecting Nigerians”:

Nigerians today will don black attires as a sign of mourning & solidarity with the victims of violent crimes.
We demand the government of President @MBuhari live up to its responsibility of protecting Nigerians. #Nigerianlivesmatter. #BlackWednesday#Nigeriamourns pic.twitter.com/VLbRobcqvt

Netizen Murtala took the time on Twitter to remember the schoolboys murdered by Boko Haram, a militant Islamist group, in 2014:

May their souls continue to rest in peace Amen. pic.twitter.com/XnGVq8Mxx1

Journalist Chxta called on netizens to “honour the dead”:

Today we mourn.
For all who this land has eaten.
Stained by terrorists, butchered by bandits, abandoned to their fate by govt.
Today we state our displeasure at the state of things.
Our land has seen enough blood. We don't want to live this way. #blackwednesday pic.twitter.com/HPg0YXv10z

Since January 2020, several violent deaths have particularly shaken the soul of Nigeria.

Reverend Lawan Andimi, local chairman of the Christian Association of Nigeria (CAN) in Michika, Adamawa State, northeast Nigeria, was abducted by Boko Haram on January 2, Punch newspaper reported. The 58-year-old Andimi was a father of nine children. 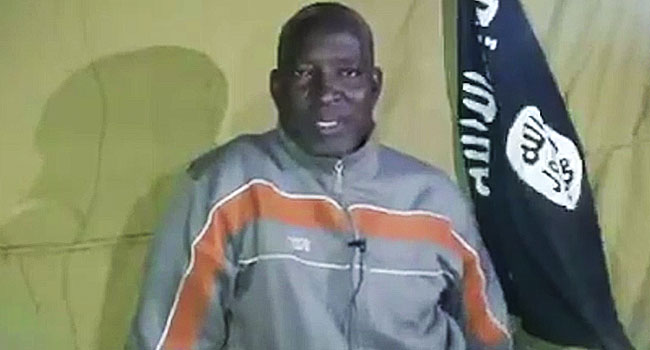 Michika town, about 200 kilometers from Yola, the capital city of Adamawa State, was attacked by Boko Haram insurgents at around 6 p.m. on January 2, according to the Cable, an online newspaper.

On January 6, journalist Ahmed Salkida posted a video on Twitter in which Andimi plead to the government to help release him from Boko Haram kidnappers: “I have never been discouraged because everything is in the hands of God. God who made them take care of me and leave me alive will touch them,” he can be heard saying.

CAN CHAIRMAN, ABDUCTED, CRIES OUT FROM BOKO HARAM CAMP

In a short recorded video Rev. Andimi declared that if its pleased God that he be released, he would be out, but if God decides not to get him out that they should look after his children. https://t.co/UHJKJVPVPJ pic.twitter.com/idbOlQRWYY

On January 21, Lawan Andimi was murdered by Boko Haram insurgents. The Nigerian Guardian quoting Dami Mamza, an official of CAN, stated that the terrorists were “offered 50 million Naira” [about $140,000 United States dollars] as a ransom for Andimi, which they rejected. Rather, “they called his wife, informing her that they would be beheading him [Andimi]…”

Andimi's wife lamented to Channels Television that her life has been devastated by this loss.

Dachiya from the town of Jing in the Pankshin area of Plateau State, in north-central Nigeria, was traveling to resume school when he was abducted on January 9 by Boko Haram insurgents, reports PM News, a Nigerian daily. Dachiya was a second-year student at the University of Maiduguri.

A video [WARNING: Graphic content — viewer discretion is advised] of Dachiya's gruesome murder was released by Boko Haram on January 22.

The family’s cry for justice and anguish for the Nigerian government “to fish out the killers” of Dachiya remains unanswered. 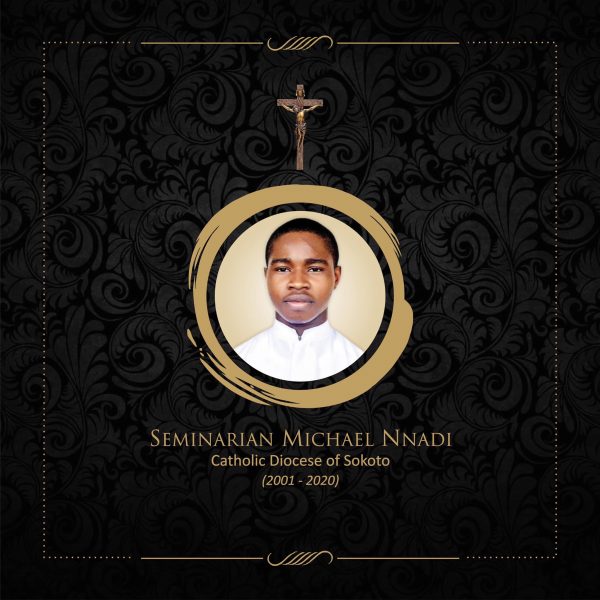 Michael Nnadi. Image from Omokugbo Ojeifo and used with permission.

Three weeks later, three of the four kidnapped seminarians – Kanwai, Umenukor and Amos – were released by their abductors.

On February 1, Nnadi, the youngest of the abducted students, was killed by his abductors. Fr. Joel Usman, seminary registrar, confirmed to Channels Television that “the body of the seminarian was found dead inside a bush.”

While Boko Haram has not claimed responsibility for these kidnappings, the techniques and patterns used are similar to those of Boko Haram.

Nnadi and his twin brother Raphael had been living with their grandmother since their mother’s death six years ago.

Public intellectual and Catholic Bishop of Sokoto, Rev. Hassan Matthew Kukah, delivered a scathing homily at the burial of Nnadi that sums up the frustration of Nigerians about the security situation:

Nigeria needs to pause for a moment and think. No one more than the president of Nigeria, Major General Muhammadu Buhari, who was voted for in 2015 on the grounds of his own promises to rout Boko Haram and place the country on an even keel.

Kukah referred to Buhari's speech on February 26, 2015, at the Policy Think Tank, Chatham House in London, England, when Buhari told his audience that Nigerian soldiers are “capable and they are well-trained, patriotic, brave and always ready to do their duty.” Buhari promised:

If I am elected president, the world will have no reason to worry about Nigeria. … We will improve intelligence gathering and border patrols to choke Boko Haram’s financial and equipment channels. We will be tough on terrorism and tough on its root causes…We will always act on time and not allow problems to irresponsibly fester. And I, Muhammadu Buhari, will always lead from the front.

…There is no need to make any further comments on this claim. No one could have imagined that in winning the presidency, General Buhari would bring nepotism and clannishness into the military and the ancillary security agencies, that his government would be marked by supremacist and divisive policies that would push our country to the brink.