'Restrictions should not be put on freedom of expression'

International Women's Day (IWD) is celebrated worldwide every March 8 to highlight the women’s rights movement. In Pakistan, the celebration has become prominent since 2018, when a platform of Pakistani feminist organisations called Hum Auratien — We are Women in Urdu — organised marches in three different cities. In 2019, they successfully held marches in additional cities throughout Pakistan.

This year, however, Hum Auratien faces a challenge: A petition filed by advocate Mohammad Azhar Siddique, in the Lahore High Court on Monday, February 24, 2020, seeks a permanent ban on the march, deeming it “anti-state” and “un-Islamic.”

What is Aurat March?

On March 5, 2018, a group of feminist and social organisations — namely, The Feminist Collective, Women's Collective and Girls at Dhabas — united under Hum Auratien and announced that an “Aurat March” or “Women's March” will be held on March 8 in Karachi, Lahore, and Islamabad, to demand economic, reproductive and environmental justice for women. 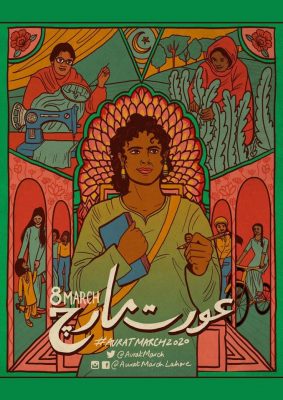 Over the past two years, women rallied across Pakistan to raise awareness of women's issues and demand their rights as equals. They held marches in major cities in which women, girls and also men of all ages participated. The marchers held and displayed placards with messages denouncing patriarchy.

Aurat March Pakistan has a manifesto that speaks to inclusivity for feminist women, transgender individuals, non-binary persons and gender and sexual minorities who stand against patriarchal structures that leads to sexual, economic and structural exploitation of women.

‘Freedom of expression cannot be curbed’

The court accepted Siddique's petition, which stated that International Women's Day should be to “recognise and appreciate women for their achievements as well as [display] solidarity … but not to cross all limits or criticize and abuse the men.”

In the petition, he further mentioned that Aurat March is a “misdirection and a failed attempt to raise grave issues commonly faced by women,” as “there are always offensive messages through placards.” The petition also claims that “various anti-state parties [are] funding this so-called ‘Aurat March’ with the sole purpose of spreading anarchy among the masses. Their hidden agenda includes spreading anarchy, vulgarity, blasphemy and hatred against the very norms of Islam.”

Aurat March has once again faced backlash on social media. When the petition was filed in the LHC, many netizens celebrated it:

This is good news!!

More than anti-state, they are anti-Islam!

As a Muslim country, all marches and campaigns against Islam must be banned!

Kudos to the person who filed the petition to stop this vulgarity! Well done!!

Supporters of Aurat March condemned the backlash, stating that holding a peaceful protest is a democratic right:

“Why didn't LHC just throw the petition out? We're not violent, we've done nothing illegal, we're only demanding the rights that the constitution has already promised us”, @shmyla responds to petition filed in LHC against #auratmarch2020

Every time I think I understand how fragile masculinity is, I find myself re-educated. Filing a petition in the high court to prevent #AuratMarch2020 from taking place is so telling. #thisiswhywemarch , jackasses.

Hearing the petition February 27, Chief Justice of the Lahore High Court, Mamoon Rashid Sheikh said, “restrictions could not be put on freedom of expression,” according to a report from Dawn media.

The hearing was attended by lawyers and human rights activists, among whom senior lawyer and rights activist Hina Jillani was also a part. She responded to various questions and spoke in defense of Aurat March. The judge asked both parties to file their replies by the next hearing and sought responses from security agencies and civil society to assess security arrangements and potential threats.

Jilani, speaking to media after the hearing, said:

As far as decency is concerned, we know more about decency than these petitioners. We learn it from our parents; these people will not tell us about our values; we know what our social values are. These are just dirty mindsets that seek out obscenity in everything.

Organisers of Aurat March in Sukkur, Sindh, were threatened by religious-political parties, which was condemned by the Karachi chapter of Aurat March.

While addressing a rally in Karachi, Sindh, on February 29, 2020, Maulana Fazlur Rehman urged party workers to make sure that Aurat March does not take place:

Wherever you see such elements, ask the law [enforcement authorities] to stop them, but if the authorities provide protection to such protests, then get ready for any sacrifice. We cannot let religion and our cultural values be bad-named.

In a recent development, a woman named Rubina Jatioi presented a petition in Sindh High Court on February 28, 2020, against slogans at Aurat March. She urged in the petition that “immoral slogans” at the march should be banned and Aurat March “does not help women get any rights”. While the SHC said that there was no solid ground to file a petition as she did not have documents to back her claims, she was asked to come prepared at the next hearing.

As the day of the 2020 march draws closer, all eyes are turned to the Lahore High Court to rule on the merit of the petition — to see if the law upholds the rights of women to demonstrate peacefully or surrender to the very forces against whom they are raising their voices.