Tbilisi braces itself for renewed anti-government protests next month 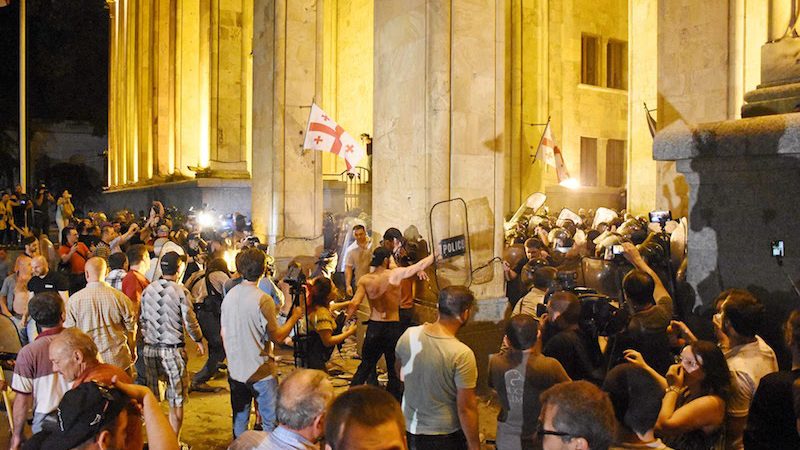 A decisive return of young Georgians to politics took place on 21 June 2018 — hours after a heavy-handed response by the authorities against political groups’ attempt to storm the parliament through police lines. Photo: Mari Nikuradze/OC Media

Well into the new year, many Georgians believe that their government isn't keeping its resolutions. Recently, those who demand that this October's parliamentary elections be “more democratic” have had two venues to engage with the ruling party. They can either attend roundtable negotiations brokered by foreign diplomats, or protest outside the parliament building in the capital Tbilisi. However, both these channels have diminished lately. No roundtable talks have been held since late December. In January, Tbilisi City Hall fenced off an area in front of parliament, a traditional spot for political protests, citing renovation works.

A difference between these venues is that Georgia's anti-government youth movement has no seat at the formal negotiations table. In fact, one appeal of the street rallies which have rocked the capital since last summer has been that they were not run by the opposition parties everybody would expect to see around that table. Two opinion polls commissioned by the National Democratic Institute and International Republican Institute late last year suggest that a plurality of Georgians are undecided as to their political preferences and have low trust in parliament. In short, they're eager for alternatives. With little hope of political renewal and little clarity over this year's elections, a stalemate looms over Georgian politics.

With more protests scheduled for April 5, all eyes are on country's youth driven protest movements. A burning question is what role they could play in sending a ruling party back to the opposition benches.

There’s nothing unprecedented about youth dominated protests in Georgia. What's new is that over the past year, young Georgians have come to set the agenda in these demonstrations, not just participate in them. The catalyst came during the upheaval of June 20, 2019, when the ruling Georgian Dream party invited the Russian communist politician Sergey Gavrilov and a delegation from Moscow to address Georgia's parliament. As Russian soldiers currently occupy internationally recognised Georgian territory, the move did not go down well with the public.

After fighting off several lines of aggressive protesters for several hours, police started to indiscriminately fire rubber bullets into the crowd. They injured over 160 civilians. The following footage, taken by a protester on his mobile phone, shows the attack:

The crackdown on “Gavrilov Night” triggered even bigger rallies. Young protesters went onto the streets covering one eye with a hand to show solidarity with those injured. Their anger was predictable. But few expected that a demand as unsexy as moving from a semi-proportional to a fully party-list based electoral system would make it to the top of the young protesters’ agenda.

After all, anti-government liberal youth groups had earned a very different image.

The original name of the leading anti-government group Shame Movement — #ForFreedom (#თავისუფლებისთვის) — hints at its roots. In some ways, the movement was a spillover from the Dance for Freedom protests a year earlier that had been triggered by the authorities’ anti-drug crackdown on popular Tbilisi night clubs.

Nevertheless, it soon looked as though the protesters had scored a victory. On June 24, after four days of street protests, the chairman of Georgian Dream and ex-Prime Minister Bidzina Ivanishvili promised to introduce a reformed electoral system in time for the 2020 elections.

“Why did we ask for electoral reform in response to ‘Gavrilov Night'? Because we see it as the only way for Georgia to avoid single-party rule or endless political crises,” explained Shota Digmelashvili, one of the leaders of the Shame Movement, in an interview for Global Voices.  In Georgia's current mixed electoral system, 73 of the 150 members of parliament are elected in these single mandate districts, raising the incumbent party's chances to gain a constitutional majority. As this helps the incumbent build a constitutional majority, critics see this as a recipe for a potentially unaccountable concentration of power under one party.

As soon as the youth-led Shame Movement made electoral reform their top demand last June, Georgian Dream insisted that they were secretly managed by the United National Movement (UNM), which ruled the country between 2004 and 2012. The UNM remains a diminished, but influential, pro-European opposition party while its former leader Mikheil Saakashvili, who is wanted on criminal charges in Georgia, lives in exile. Ivanishvili's relationship to Saakashvili is so strained that it is regularly characterised as a vendetta.

Digmelashvili, who campaigned against the UNM before 2012, dismisses these accusations. “[On June 20] we literally had to organise a human chain around the main stage to block party leaders from taking over the protest,” he recalls. Digmelashvili adds that the protesters later allowed a speaker from each political party to address the crowds from the stage, provided that they “shared the protesters’ three demands and were pro-Western.” These demands included reforming Georgia's electoral system, the release of detainees arrested during 20 June rally, and the resignation of Interior Minister Giorgi Gakharia.

Iago Kachkachishvili, head of Tbilisi-based Institute of Social Studies and Analysis, does not entirely dismiss the idea of links between the young protesters and opposition parties. As the Shame movement “are directly involved in opposition political processes, they would not have been able to afford not to coordinate their efforts with the parties’,” he explains. “Another issue is whether they are part of some specific opposition force. I don't think that the current protest energy of youngsters can be reduced to narrow party interests.”

Another round of protests was sparked in November, when Georgian Dream failed to garner a parliamentary majority to vote in support of its own proposed changes to the electoral system, as Ivanishvili had promised. It was widely regarded as a broken promise, and protesters gathered outside parliament to protest yet again. And again, police responded with water cannon.

Some young activists from the Dare (Georgian: Gabede), Change (Georgian: Shetsvale), and other groups took things further by targeting offices of members of parliament from the ruling majority. This sometimes resulted in arrests for “petty hooliganism” and “disobeying the police.” Beka Natelashvili, a protest leader in his early 20s who co-founded Dare after the controversial parliamentary vote, told Global Voices that police had detained 15 of their members in November.

Dare, which unites the youth wings of ten political parties alongside independent activists, claim they have also been targeted online by pro-government trolls. The Shame movement shares these concerns.  Following Facebook's announcement in December that its staff had taken down a network of fake accounts run by Georgian Dream,  it vowed to “fight against government propaganda” even more.

“We believe what we are doing now is best for our cause. We create digital content online and try to counter false narratives… but we will also renew protests in the traditional sense,” says Salome Barker, one of the leaders of the Shame movement.

The window for reconciliation is getting smaller by the day, if it is not already closed. According to Barker, the rapidly changing circumstances over the last eight months have made her movement resourceful and prepared for what comes next. When its members are not at mass rallies, they organise everything from flea markets to open air political discussions. 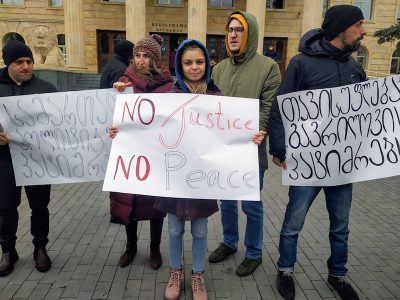 But none of their three key demands have been met.

Georgia still does not have a fully proportional electoral system. Five protesters are still in pre-trial detention. Instead of resigning for overseeing excessive force against protesters, Interior Minister Giorgi Gakharia was promoted to prime minister last September.

Moreover, a number of prominent opponents of Georgian Dream have been prosecuted in recent months on charges including, but not limited to, organised group violence and an alleged “attempt to overthrow or seize state power” on the night of June 20.

Among those indicted are former Defence Minister Irakli Okruashvili, UNM MP Nika Melia, and Nika Gvaramia, director of pro-opposition TV channel Mtavari. Most recently, on February 10, the leader of European Georgia Gigi Ugulava was sentenced to three years and two months in jail.

A large portion of critics of the current government say that they would not vouch for the innocence of each and every one of these figures. Nevertheless, they argue that something bigger is at stake.

“I know for a fact that some of these opposition leaders and former government officials did commit crimes and their sentences are long overdue. The problem we see now is selective justice; the timing speaks for itself about the political nature of these judgments,” says Tinatin Khidasheli, former defence minister and director of the Tbilisi-based think tank Civic IDEA.

In recent months, Georgia’s western partners, including US lawmakers, have stepped up their pressure on Tbilisi over these politically motivated prosecutions and its U-turn on reforms. On Twitter, Georgian Dream’s General Secretary Kakha Kaladze recently assured western partners they are ready to negotiate, which Sergi Kapanadze, an MP from the opposition party European Georgia, fiercely contested:

Opposition leaders are still in jail, cases against others still ongoing, and we have not heard a proposal, which would get #Georgia to the proportional (or close to it) system. GD still maintains they should rule with only 30% popular support. Shows how genuine the offer is :)

Most observers believe that Georgian Dream will never acquiesce to protesters’ demands. Iago Kachkachisvili “almost rules out” the party returning to its chairman's promise of creating an entirely party list dependent electoral system. “At best, they might arrive at a compromise to strike a balance between majoritarian and party-based mandates,” he concludes.

At the time of writing, Georgian Dream's latest offer to the opposition stands at slashing the number of majoritarian MPs from 73 to 50.

Kornely Kakachia, director of the Georgian Institute of Politics, a Tbilisi-based think tank, also believes it highly unlikely that the ruling party will give in “unless there is some unexpected major crisis ahead.” Due to their unpopularity, he continued, the ruling party will have a hard time reaching out to anybody.

Importantly, in the months ahead, this political turbulence does not only have the capacity to harm Georgian Dream.

“There's not much chance of Georgian Dream changing its decision, but the only issue that brought [the opposition] together is a united front for proportional elections,” states Khidasheli. “As we move closer to the election date, there will be less and less coordination and even less of a unified heard from the opposition front. I'm not optimistic,” she concludes.

Georgian Dream's success in maintaining power is in part thanks to its regular reminders to voters about the abuses of power and “authoritarian tendencies” under the previous UNM government. But a new generation of Georgians, many of whom were children when Georgian Dream came to power, are receiving a political education on the streets. Together with an array of angry opposition parties and concerned partners in the west, these young protesters have one common demand to Georgia's rulers: to safeguard the country from virtual one party rule by reforming the electoral system.