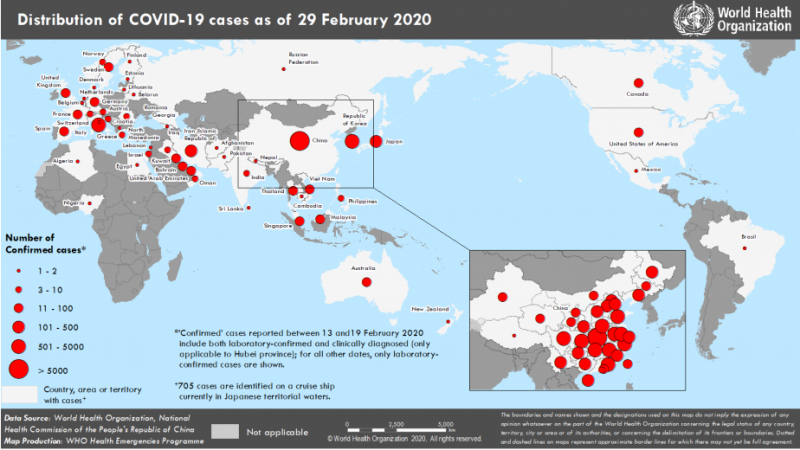 Since the outbreak of COVID-19 in China, World Health Organization (WHO) officials have been consistent in praising the country for its efforts in containing the spread of the disease. But as the virus has spread across 53 countries with more than 6,000 confirmed cases and 86 deaths outside China as of 29 February 2019, netizens pointed their fingers at WHO Director-General Tedros Adhanom Ghebreyesus for his pro-China response at the initial stage of the outbreak.

As of this writing, almost half a million people have signed an online petition demanding his resignation.

As the number of confirmed COVID-19 cases jumped from 45 on 17 January to more than 500 cases on 23 January, China announced the shutdown of Wuhan. By this time, many health experts have raised an alarm of a possible global outbreak but members of the emergency committee of the WHO were split on the issue. During a press conference, Tedros stated that there was no need to declare a public health emergency of international concern (PHEIC).

On 28 January, Tedros visited China and met with Chinese President Xi Jinping. After the trip, he praised China for its “commitment to transparency.” This is in contrast to the report of human rights observers who slammed China for its censorship measures that had prevented the flow of critical information concerning the outbreak. As of 21 February, 416 netizens have been punished for “spreading rumors” about the novel coronavirus.

Tedros deferred the declaration of PHEIC until 30 January, but he stressed that there was no need to “unnecessarily interfere with international travel and trade”.

Just a few days back on 26 January, the Wuhan mayor admitted that more than five million Wuhan residents had left the city before it was placed under lockdown. There was fear that those who left the city had brought the virus around the country. In less than a week, the number of confirmed cases in China had jumped to almost 10,000. As more and more cities announced drastic measures to contain the virus, those who can afford had left China for an extended vacation in other countries.

Though Xi made a promise to Tedros that China would welcome the investigation of an international expert team composed of 10-15 members to help study the origins of the virus, the process was delayed and China eventually only opened its doors to an “advanced expert team” composed of three WHO officials. State-affiliated media outlets and Chinese social media platforms such as Weibo and Tiktok widely shared the sound bites of WHO lead expert Bruce Aylward who praised China with statements like “to the people of Wuhan, it is recognized that the world is in your debt” and “if I had COVID-19, I would want to be treated in China.”

Aylward stressed that China’s quick response strategies have proven effective in curbing the outbreak. At the same time, he criticized other countries for not taking similar measures. Aylward later admitted in the press conference that he was not placed in quarantine after his trip to China because he did not visit any “dirty area” in Wuhan.

On 25 February, one day after the “advance expert team” concluded its mission in China, the total number of newly confirmed infected cases outside of China exceeded the number in China for the first time. As of 27 February, there were 4,351 confirmed cases and 67 deaths outside China across 48 countries. In South Korea, the number of confirmed cases surpassed 3,000 with 17 deaths. Italy reported more than 1,000 COVID-19 cases and 29 deaths. BBC’s source said COVID-19 had claimed 210 lives in Iran.

Some are asking why Tedros has been reluctant in declaring the outbreak as a pandemic.

WHO's ‘slow and weak response’

Netizens are angry about WHO’s inaction and turned it into spoofs like this one:

Legends say if you whisper ‘Pandemic’ 3 times in front of a mirror Tedros Adhanom appears pic.twitter.com/4yPcEZuu7q

Some are accusing Tedros of having a pro-Beijing stand:

WHO, please stop fake news about CCP China, you make the world drain into virus, It is highly recommend to dismiss Tedros Adhanom Ghebreyesus from Director General of WHO @realDonaldTrump @JustinTrudeau @VP @BorisJohnson pic.twitter.com/PWC7bhblsd

Others highlighted his self-contradictory language:

I think I now understand what Tedros was talking about regarding the “window of opportunity.” pic.twitter.com/Q3QOu1pP7M

[Public enemy No 1 is not only the virus, but also WHO chief Dr. Tedros’s weak and slow response] pic.twitter.com/o9GTdrhkOJ