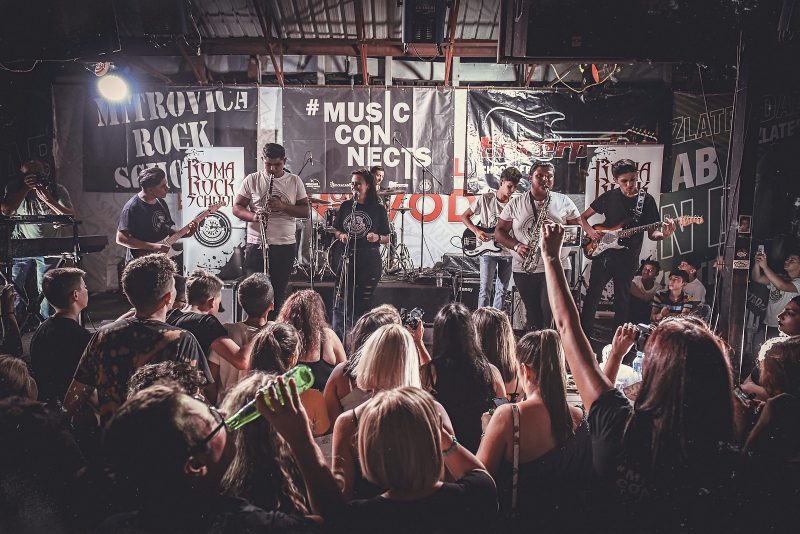 This story by Jose Carpintero Molina and Arolda Elbasani was originally published on Balkan Diskurs, a project of the Post-Conflict Research Center (PCRC). An edited version is republished by Global Voices as part of a content-sharing agreement.

Mitrovica, or Kosovska Mitrovica in Serbian and Mitrovicë in Albanian, is a city in North Kosovo near the border of Serbia. It is inhabited by both ethnic groups: Albanians and Serbs who live in two distinct districts, South and North, situated on the opposite sides of Ibar River. The area, including the bridge over the river, has been a hot spot for inter-ethnic incidents often triggering a crisis and affecting the stability of the Balkans. The political tensions related to neighboring Serbia's refusal to recognize Kosovo independence has been intertwined with the interests of the local mafia which uses the border region for large scale smuggling operations. In 2018 the moderate local Serb politician Oliver Ivanović, who promoted integration of ethnic Serbs within Kosovo institutions, was assassinated in front of his office in Mitrovica. The suspects are still at large.

International interventions in the Balkans, which include ample funding for conflict prevention and reconciliation activities, have prompted a sprawling ‘industry’ of civil society initiatives. However, these are typically vulnerable to international funding or directed at donor priorities and focused on building capacities to thrive in the world of grants. Not surprisingly, donor sponsored organizations are often perceived as ‘foreign agents’ and/or representing a specific ethnic group, which hampers their potential role as actors working for and bridging divided communities.

Amidst the few civic initiatives that have succeeded in transforming themselves into popular centers that thrive and expand upon the demand of citizens from different ethnic groups is the Mitrovica Rock School. It started as a typical, internationally-sponsored project in 2008, and became an independent NGO in 2012 thanks to funding from the Dutch Ministry of Foreign Affairs.

Moreover, working in a city marked by deep divisions – separate spaces, government services, phone lines, schools, and currencies, as well as occasional cases of violence –has not been easy. According to Dren Puka, the director of research at the Kosovar Civil Society Foundation, communal divisions pose clear limits to common civic action:

One of the main characteristics that defines Mitrovica is the absence of hope… Once you return home after participating in an activity, you are surrounded by the fear that is used to keep the city isolated.

Wendy Hassler-Forest, program manager and regional representative for the Dutch foundation Musicians without Borders, and  one of the foreign founders of the school, agrees:

Working in a place where people can’t even meet is tricky. I came to realize that people on the two sides of Mitrovica really don’t know anything about each other.

Some of the joint inter-ethnic activities of the Mitrovica Rock School at first took place in Skopje, the capital of neighboring North Macedonia, as a safe and in a way ‘neutral ground’ where kids who usually didn't venture on the other side of the river in their hometown felt safe to interact with their peers from the other community.

Despite such obstacles, the school has gradually succeeded in bringing together Albanians and Serbs, who rarely cross over to one another’s side of the city, to create music. Since its founding 12 years ago, the school can boast of hosting approximately 1,300 students, creating 49 multi-ethnic bands, organizing several well-attended concerts, and maintaining a sustainable program – all while enjoying the popularity of a multi-ethnic hub in Kosovo and beyond. In 2019 alone, 112 students participated in 1,782 skills acquisition lessons and 179 band coaching sessions. 10 mixed bands performed 96 rehearsals and 13 concerts in North and South Mitrovica, Prishtina, Leposavic, Brezovica, Novo Selo, Skopje, and Belgrade.

A useful past and the transcendent power of music

The school was founded under the motto “We restore Mitrovica’s proud music heritage, together”, connoting a rich, even if often forgotten, past when Mitrovica was a multicultural hub with a rich cultural scene. By promoting a specific focus – an interest in rock music – the organizers appeal to the individual tastes of adolescents from different communities and emphasize mutual respect and tolerance rather than communal links.

This focus translates into a range of appealing activities – daily lessons, training weeks, workshops, and concerts as well as the opportunity to create musical groups – all of which typically involve a variety of influences by members of different communities. Since 2015, the school has been helping its mixed bands record their songs and set up rehearsals in joint venues across both north and south Kosovo, a development that was unthinkable when the school was created in 2008. Hassler-Forest explains the power of music to transcend divisive politics:

When you place two people in a band together, then you suddenly have Jelena the singer with Dren the guitarist writing an amazing new song that has nothing to do with politics. They’ve transcended it. 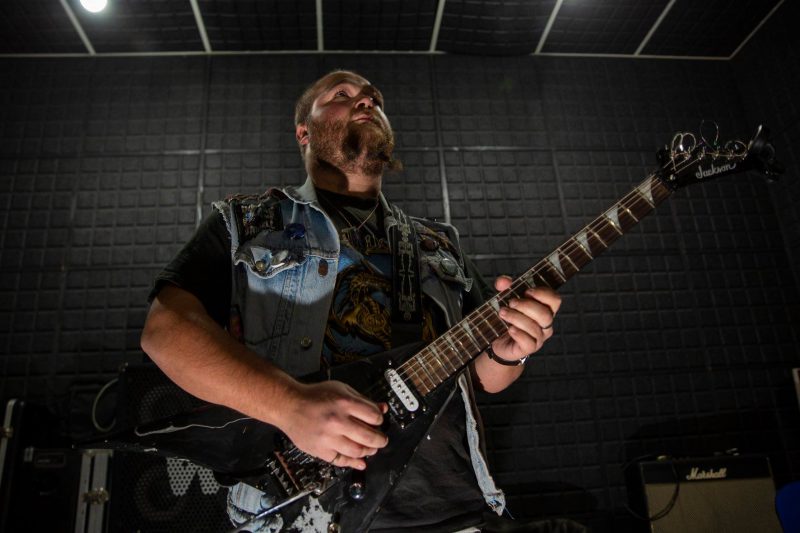 Indeed, the school has helped to forge an atmosphere of trust, and even friendship, between its participants and beyond. According to one of the school’s local directors, Milizza:

Over time, you see students who truly connected to form strong friendships…[But] it took us a long time to get to where we are now.

From a neutral to a local meeting place

Given that security is of major concern to Mitrovica citizens, it is apparent that the school has struggled to create a safe and suitable space where members of various communities can come together to create music.

[Initially] we found a location, the basement of the Cultural Center, which is immediately next to the main bridge… we hoped that youth from the two sides would come there for music lessons. But this was naïve. People in Mitrovica don’t cross the bridge, especially not for something like music lessons.

The organizers then decided to invite young musicians to attend a summer school in Skopje, North Macedonia where young people from different communities were free to meet, form bands, rehearse, and, ultimately, perform a concert together. Upon their return to Mitrovica, students asked for a meeting place in their town. Hassler-Forest recalls:

When the kids came back to Mitrovica, they demanded a school in their own town. We then decided to restructure the project. One [school] on each side but where we brought the kids together for regular summer schools, training weeks, and tours.

And, thus, two branches were born – one in the North and one in the South. 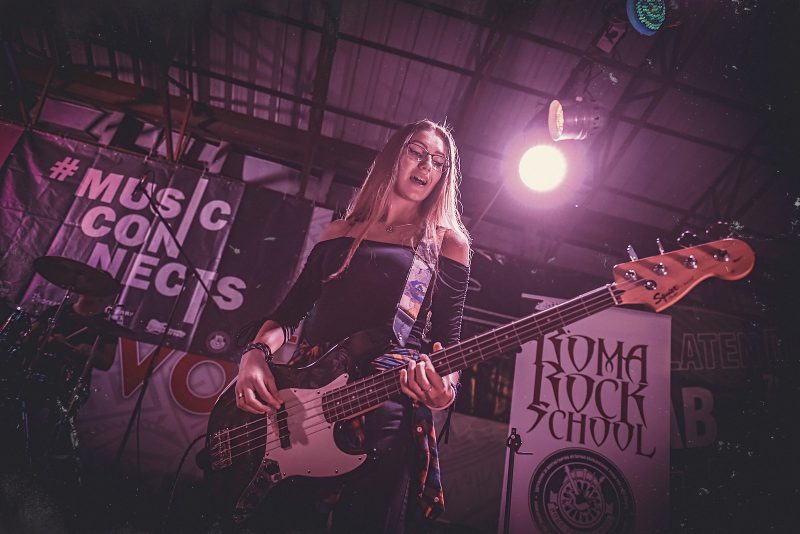 The form of mixed local and international management has also enabled this project to advance, allowing for sensitivity to the subtleties of the local situation while also providing an adequate distance from it.

At rock school, we’ve always had a core management team consisting of one local from each side plus one international to support a mixed team of local teachers. So, we keep each other in balance.

Stimulating local demand, however, has taken a lot of time and patience. Organizers continue to manage safe transport for participants from one part of the city to the other, but, with the passing time, more and more students have started to organize their own transport or even prefer walking, which is a clear indication of the growing inter-connectivity and trust. Students have also become more confident in advertising their common activities, songs, and concerts on social media, a radical change from just a few short years ago when such promotion came with a fear of repercussion.

When we ended up having a concert in Mitrovica last year, everyone participated. Honestly, I was myself a bit surprised, especially when I saw how supportive the parents were….The hardest work is to proceed slowly and stick around. Not to expect quick results.