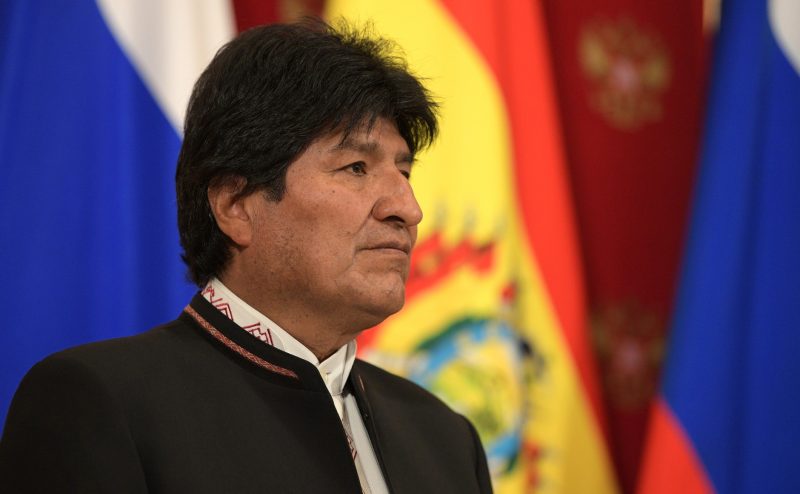 On January 18, 2020, the crowd at the inauguration of the Yacumo Technological Institute in northwest Bolivia was surprised by a familiar voice.

Through a microphone placed near a phone on speaker, former president Evo Morales, in exile since November 2019, said:

I am very sorry for everything that has happened, but I want to tell you with great respect that we have the obligation to unite and reclaim our process of reform.

That wasn't the first time the former indigenous president showed up at an inauguration over the phone. In December 2019, Entre Ríos Deputy Governor Wálter Ferrufino called Morales on the phone during the opening ceremony of a market in the area. Weeks later, Ferrufino was detained for four hours at a Bolivian airport on his way to Argentina, where he was to attend a meeting with Morales and his Movement for Socialism (MAS) party.

The Bolivian people call Evo Morales by phone once again so that he can inaugurate a project. He previously participated at the opening of a project in the Oconnor province, which is why the Deputy Governor is detained. This time the project is in the department of Beni.

Both phone calls attest to Morales's enduring influence in Bolivian politics despite his being in exile since he stepped down amid military pressure in November 2019.

Morales became the first-ever indigenous president of Bolivia — a country where more than 40 percent is of indigenous origin — in 2006. In November last year, he won his third reelection on a vote some international observers considered fraudulent. Protests against Morales erupted and, five weeks later, the army “advised” Morales to resign — an event that Morales and his supporters see as a coup d'etat. A wave of resignations within his party ensued.

In December, the Bolivian prosecution issued an arrest warrant for Morales on charges of “sedition and terrorism” after he allegedly threatened to “besiege cities” amid the protests against his reelection.

After the power vacuum left by MAS, the presidential line of succession pointed to Jeanine Añez, a right-wing opposition lawmaker and second vice-president of the Senate. Since her arrival to power as interim president, she has been accused of racism against indigenous peoples and of leading Bolivia into a “brutal right-wing regime” with fundamentalist Christian views.

New elections are scheduled for May 3. MAS’ presidential candidate is Luis Arce, Morales’ former Minister of Economy. Also running are MAS’ rivals Carlos Mesa and Jorge Quiroga, who ruled Bolivia between 2001 and 2005, as well as Añez. The elected candidate will be sworn in on August 6, when Bolivia celebrates Independence Day.

Morales, who first sought exile in Mexico before settling a month later in Argentina, has been accused by former Mexican President Felipe Calderon and Bolivia's interim president Jeanine Añez of contravening the Montevideo Treaty on asylum, which states that “asylum seekers will not be allowed to (…) participate in or influence political activities.”

Yet, neither Bolivia nor Mexico ratified the treaty, according to Mexico's Secretary of Interior, Olga Sánchez Cordero, and Mexico, under the government of leftist president Andrés Manuel Lopez Obrador, has defended Morales’ right to “freedom of speech.” Since November, Bolivia's relations with Mexico and Argentina have soured.

Yerko Nuñez, Añez's right-hand man, considered Morales's phone calls at the inauguration “outrageous,” a “joke”  and a “usurpation of duties.”

It is a joke, but at the same time an outrageous act, to hear the former president inaugurate projects by phone. You just usurp the functions and add to the list of crimes for which you must respond to the #bolivian justice.

Morales sought to register as a candidate for the Senate in the upcoming elections on May 3, 2020, but the Bolivian Electoral Tribunal rejected his candidacy on the grounds that he did not meet the requirement of having permanent residency in Bolivia.

According to the analysis published in World Politics Review by columnist Frida Ghitis, Morales was the kingmaker behind the candidacy of Luis Arce, the former Minister of Economy who will represent MAS in the upcoming presidential elections.

Arce, who took political asylum in Mexico and Argentina along with Evo, and who is being investigated for corruption by the interim government, returned to Bolivia on January 28, 2020. A march in his support was held in La Paz on February 3 after his and David Choquehuanca's candidacies (the latter as vice-president) were accepted by the Supreme Electoral Tribunal.

Some MAS leaders prefer Choquehuanca, who is indigenous, to run for president instead of Arce. Esperanza Calle, a journalist with the newspaper El Alteño, says that it seems that Morales does not want another indigenous leader to “overshadow him”:

Evo's decision unleashed criticism from the leaders who have always supported the MAS party and the politics of the current government. Some describe his actions as a “betrayal of social organizations” and others as “arrogance” because the former authority supposedly does not want anyone to “overshadow” his indigenous status.

In January, Morales provoked outrage after he declared that “if I would return (…) we must organize, like the armed militias of the people in Venezuela.” He retracted his call three days later.

Following Morales's statement on his intentions to return to Bolivia, the Interior Minister of Bolivia's interim government, Arturo Murillo, said that Evo Morales “has a cell with his name” in the San Pedro de Chonchocoro jail in La Paz.

With the elections date already set and the parties choosing their candidates, Morales is struggling to keep his influence.