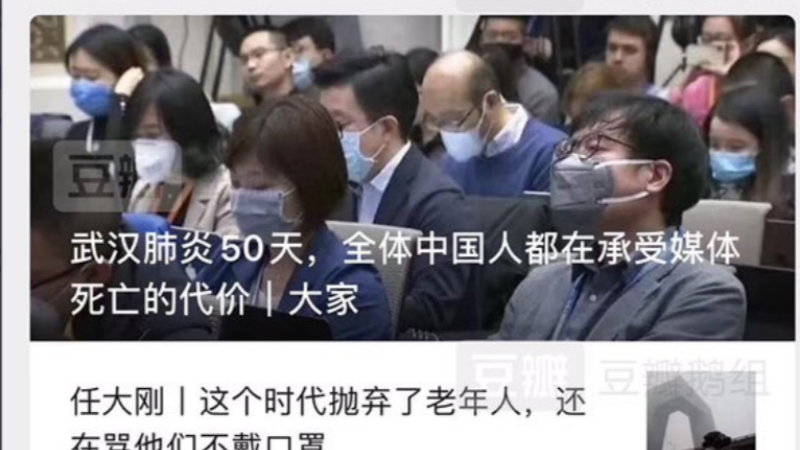 Screenshot of “Tencent Dajia” and its last piece of commentary. Via Twitter.

Tencent Dajia, (also called We Tencent  – 騰訊大家), a popular online media outlet posting high-quality commentary, suddenly vanished from the Chinese internet after it published an article headlined “The 50 days of Wuhan pneumonia: Chinese people are all paying the price of the death of media”.

Following the article's publication, the website of Tencent Dajia and its WeChat public account disappeared from the internet. Both Tencent Dajia and WeChat, a popular Chinese messaging and social media app, are owned by China’s biggest tech giant Tencent.

The takedown happened on February 19, the same day three Wall Street Journal reporters were expelled from China in response to the publication of an opinion piece referring to China as “the real sick man of Asia.”

The takedown of Tencent Dajia is considered a new milestone in the tightening of censorship in China since the beginning of the COVID-19 outbreak in Wuhan. With the support of Tencent, the media outlet has been able to establish itself as a media industry leader, recruiting hundreds of prominent writers and journalists from mainland China, Hong Kong and Taiwan wince it was launched in December 2012. Despite censorship and restrictions on media freedom in China, the We Tencent’s commentary pieces have become to be considered as some of the best in the industry.

For years, the media outlet had survived China’s strict censorship under the protection of Tencent. After notification from censors, the corporation would usually only take down certain articles, or stop publishing for a period of time in order to do a thorough clean up. This time it deleted the “Daijia” public account on WeChat, and tens of thousands of articles published in the past seven years have vanished.

This sudden instance censorship has shocked many netizens on social media. Many believe that the last published article — “The 50 days of Wuhan pneumonia: Chinese people are all paying the price of the death of media” (武漢肺炎50天，全體中國人都在承受媒體死亡的代價) — was the cause of the takedown.

The death of media

Many also see the incident as the censor forcing the “mother” corporate, Tencent, to kill its own “son”, Dajia. The following WeChat comment by Tang Min-tao, a human rights lawyer was reproduced on Twitter:

The views expressed in the “50 days of Wuhan pneumonia” article are in fact rather moderate: its writer, a media professional, simply pointed out that press freedom is the best vaccine for epidemic control and the outbreak of the COVID-19 virus in Wuhan was aided by the malfunctioning of the media or the “death of the media”.

According to the writer’s observations, between December 8, 2019 and January 20, 2020, the media functioned as a “pacifier”, as the majority of news reports stressed that the spread of the virus was “under control”, given that experts stated that the virus was not transmissible among humans.

After January 20, as the outbreak spread outside of China, and the authorities decided to adopt emergency measures to contain the spread, the media shifted to producing content with positive messages in order to “touch the hearts” of the Chinese people and motivate them to fight against the virus. The writer pointed out that on January 25, Hubei and Wuhan official media outlets still labelled social media reports on the real situation in the quarantined city as rumors.

The founding editor of “We Tencent” Jia Jia thus believes the takedown of Tencent Diajja was a result of a change in the overall strategy of the government:

The slogan of “We” comes three words I use: insight, value, beauty. Such an editorial principle is difficult to uphold and very rare in China… writing with conscience involves describing and explaining the big issues that we face. “We” was created to address these big issues, and its death is also related to these big issues.

After the social media uproar following the death of Dr. Li Wenliang, censorship in China has increased to new levels. Since February 6, a notification issued by public security authorities was circulated on a large number of WeChat groups warning against spreading any information concerning the coronavirus from unofficial sources. The result of violating this rule, the notification said, would be permanent deletion of the group.

In Jining City, in China's northeastern Shandong province, unverified claims circulating online said that all WeChat groups of work units such as hospitals, schools, street-level Chinese Communist Party (CCP) offices and other public institutions had been deleted to prevent these groups from leaking information about the spread of COVID-19. The leaders of the work units said the aim of such a decision was to protect members of the groups. Although the Shandong authorities later flagged this news as rumor, in the comment sections netizens said they had experienced such deletions.

Even private family groups are subject to censorship, as an overseas mainland Chinese student noted on Matters News:

Today, I discussed an academic article about the Wuhan virus lab. Because of my academic background, I briefly explained the abstract of the paper written by Shi Zhengli. Within thirty minutes, the group received a notification from the WeChat rumors crackdown admin…
But what I have discussed is not a rumor, it is a black and white academic paper. Why don’t you ask the journal to take down the paper if it is a rumor? I called my sister back home in China, she said because of you, the internet police has started monitoring our family WeChat group, this is terrible.

Some overseas mainland Chinese believed that the coronavirus would loosen control over speech, this is alas too naive.

Individual user accounts have also been subjected to permanent deletion. A WeChat user shared her experience on Matters News on 11 of February:

I received a notification saying “Permanent restriction to login” on WeChat.
I filed an appeal, but others told me that it was impossible to reopen my account. A friend with the same experience said he was turned into a ghost, as he could see others talking about him in groups, but he couldn’t talk back.

The most inconvenient aspect is that I have so many business friends on WeChat and I have to rely on the platform to keep communications. In the future, my soul and spirit can only survive outside the wall. This feels as being an exile, as I care about what happens inside the walls and want to share my views with people inside the walls.

Professor Xu Zhangrun’s account has also been deleted. The worst is that he is now incommunicado. I don’t want to be like that. Though I am proud that my account was deleted for the same reason as what happened to others [who had appealed for free speech reform on social media]. I am also scared. Within the walls, I can only live like an ant working for its survival without uttering a sound.